She's often described as "Canada's Rosa Parks," but if anything, Rosa Parks is America's Viola Desmond.

N.S. woman refused to give up seat at movie theatre 9 years before Rosa Parks' famous act of defiance

She's often described as "Canada's Rosa Parks," but if anything, Rosa Parks is America's Viola Desmond.

The civil rights icon and new face of the Canadian $10 bill refused to give up her seat in a whites-only section of a Nova Scotia movie theatre nine years before Parks's famous act of civil disobedience on a racially segregated bus in Montgomery, Ala.

"Viola was passionate about people. She inspired them and she inspires us," Desmond's 89-year-old sister Wanda Robson said Thursday when the bill was announced at the Canadian Museum of History in Gatineau, Que.

Now she's made history again as the first Canadian woman to be featured on a $10 bill.

Between 2004 and 2012, the back of the $50 bill featured Quebec suffragette Thérèse Casgrain and the "The Famous Five" Canadians who fought for women to be recognized as persons under law: Louise Crummy McKinney, Irene Marryat Parlby, Nellie Mooney McClung, Henrietta Muir Edwards and Emily Murphy.

Born and raised in Halifax to parents who were active members of the city's black community, Desmond was always ambitious.

At a time when opportunities were extremely limited for women and black people, she set out to establish a career in business.

She studied at the Field Beauty Culture School in Montreal, one of the few institutions that accepted black students, and went on to open Vi's Studio of Beauty and Culture, a Halifax beauty parlour and shop that catered to black women.

From there, she expanded her empire, founding the Desmond School of Beauty Culture and launching a line of products sold at shops owned by her graduates.

Taking a stand by taking a seat 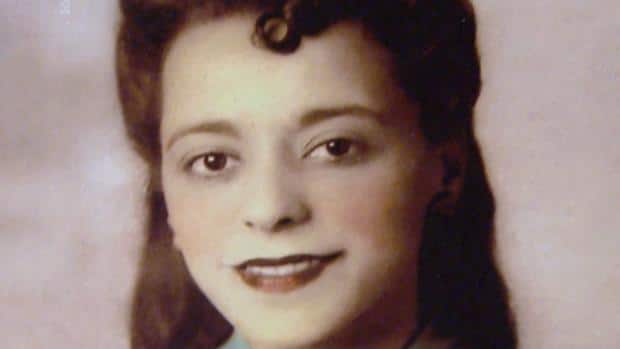 On Nov. 8, 1946, Desmond, who was then 32, had some time to spare while she was waiting to get her car fixed, so she decided to catch a movie at the Roseland Theatre in New Glasgow.

She sat in the slightly more expensive, and implicitly whites-only, section of the theatre. She was asked to move, but she refused — so she was removed by force.

"The usher came up and said, 'Miss, you are sitting in the wrong seat, you can't sit here, that seat is more expensive,' so Viola said, 'OK, I'll go and pay the difference,'" her sister and Wanda Robson, who has dedicated her life to telling Desmond's story, told CBC News earlier this year.

"But when the usher came again and said, 'I'm going to have to get a manager.' Viola said, 'Get the manager. I'm not doing anything wrong.'"

The manager dragged her out of the theatre and she was arrested. She spent a night in jail and was released the next day, badly bruised, after paying a $20 fine and $6 in court costs.

The charge against her was attempting to defraud the provincial government because of the one-cent difference in the amusement tax.

Her battle didn't stop there. Desmond hired legal counsel and appealed the charge in court — but she ultimately lost.

"She discovered that Canada was not ready to recognize racism and its shameful companion, segregation," Patty Hajdu, minister of the status of women, said Thursday at the Ottawa event.

Even though Desmond lost her court battle, her story and her vigilant activism through the Nova Scotia Association for the Advancement of Coloured People were important factors in the eventual abolition of the province's segregation laws in 1954.

But all the attention she received — much of it negative — took a serious toll on Desmond. She eventually divorced, shut down her business and left her home province for Montreal and then New York City in search of a fresh start.

A place in the history books

Despite her profound impact on history and undeniable bravery, Desmond has only begun to achieve mainstream recognition in recent years, in large part thanks to Robson's tireless efforts to tell her sister's story.

She often travels the country to speak about Desmond, and she penned a book about her, Sister to Courage, in 2010.

In 2014, Desmond was honoured on a Nova Scotia holiday. That same year, the Canadian Museum for Human Rights unveiled a display dedicated to the legacy of the black rights pioneer. Last year, an outdoor theatre opened in New Glasgow bearing her name.

A portrait of Desmond hangs in Government House of Nova Scotia, and earlier this year, Historica Canada released a Heritage Minute detailing her act of civil disobedience.

Still, her name is not known far and wide like that of Rosa Parks.

Craig Smith, president of the Black Cultural Centre for Nova Scotia, told CBC News earlier this year that Desmond's story should be a part of basic history in Canadian schools.

"Here in Canada, we're really good at — for lack of a better term — whitewashing history, or even just omitting it from the history books altogether so nobody has to learn from it." 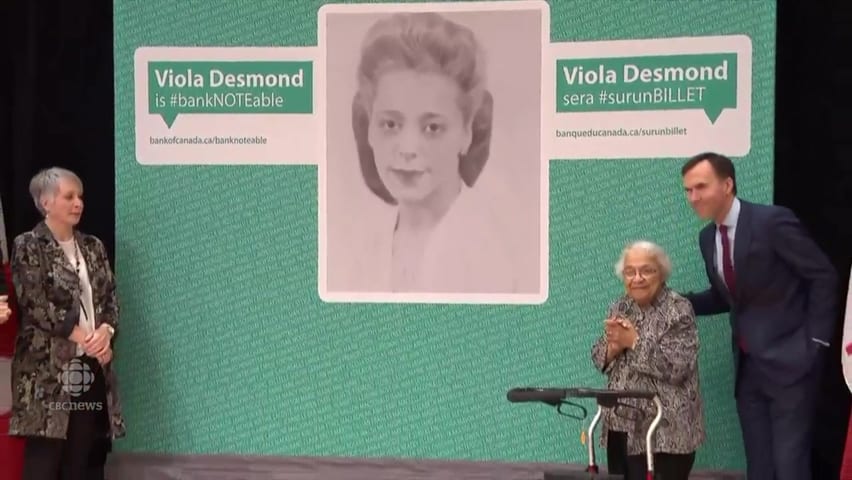 4 years ago
3:14
Finance Minister Bill Morneau announces that activist Viola Desmond, who is often referred to as Canada's Rosa Parks, will be on the 10 dollar bill that will go into circulation in 2018. 3:14

To Robson, Desmond was more than a civil rights icon; she was a kind person, a sometimes annoying sister who would correct her when she used bad grammar, a skilled businesswoman who genuinely cared about her customers and a passionate advocate for education.

"The last thing I'd like you to remember about Viola is that she was a lady," Robson said Thursday. "If you wanted another person other than the Queen to be on the bill, you've chosen the right person."