Video has surfaced of the aftermath of the fatal derailment of a Canadian Pacific Railway freight train a year ago. It comes in the wake of a CBC/Fifth Estate report that has sparked controversy over whether an outside police force should conduct an investigation into the crash.

Safety board demotes lead investigator into B.C. derailment over call for RCMP involvement 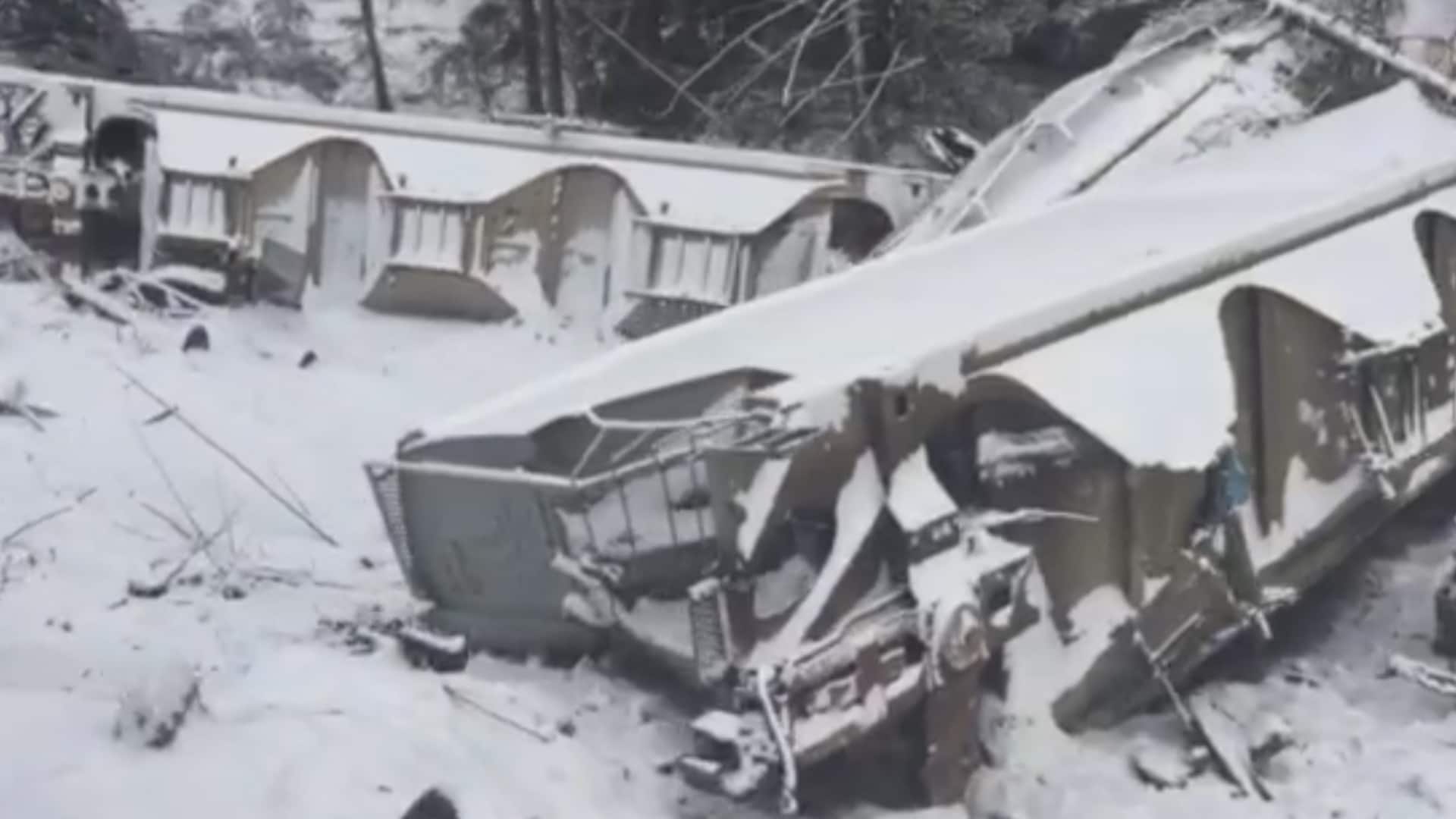 A metal CP Rail car ripped in half.

A dusting of snow covering the site while heavy machinery removes 99 derailed grain cars, most of them lying smashed along a mountainside.

These close-up images from video recently obtained by CBC News show the aftermath of the derailment of a Canadian Pacific Railway freight train one year ago today near Field, B.C.

The video was made by CP Rail workers in the days immediately after three of their colleagues were killed on Feb. 4, 2019.

"It was a war zone … I was dumbfounded at the carnage," one railroader told CBC News, recalling driving a train through the crash zone after the runaway train derailed at the Spiral Tunnels.

"The only thing I could think about was the terror that went through their heads," the railroader said, recalling that he burst into tears when he learned his friends Andrew Dockrell, Dylan Paradis and Daniel Waldenberger-Bulmer were killed in the crash.

The video has surfaced in the wake of a CBC Fifth Estate report that uncovered a string of failures at CP Rail and has sparked controversy over whether an outside police force should conduct an investigation into potential criminal negligence.

The Transportation Safety Board of Canada has demoted its lead investigator in the probe of the crash, stripping him of his title as investigator in charge, after deciding his comments to CBC News about the case were "completely inappropriate."

Don Crawford had told CBC News, "There is enough to suspect there's negligence here, and it needs to be investigated by the proper authority."

He made the comment last week in the wake of a documentary by CBC's The Fifth Estate about the tragedy.

The safety board issued a statement saying, "It was completely inappropriate for the lead TSB investigator in the Field investigation to voice any opinion implying civil or criminal liability."

While the TSB wouldn't comment on Crawford's current status, CBC News has learned that he is no longer in charge of the investigation but will remain involved with the file.

Controversy has erupted over how the TSB and police should handle the case. It comes after Crawford's comments and claims by a former officer with CP Rail's own police service, who says he suspects "some type of coverup" by the railway.

The TSB issued a statement following Crawford's call for police involvement, saying the organization "does not share the view of the lead safety investigator."

The board said it has taken measures "to protect the integrity and impartiality of the investigation."

The TSB, whose mandate is to determine accident causes and make safety recommendations, is not expected to deliver its report for another year.

CP has also rejected the assertions of a former CP Police Service officer.

That officer, Mark Tataryn, worked for the CP Police Service, a fully authorized federal police force paid for by the railway. He alleges he was stonewalled when he began looking into the company's role. Tataryn told CBC News he believes there was some kind of "coverup."

CP and CPPS dispute that and characterize Tataryn as a disgruntled employee who resigned amid an internal discipline investigation over "infractions."

Tataryn said he quit to take a job with the RCMP and believes CP is trying to discredit him.

Calls mount for outside investigation

CP Rail won't comment on the specifics of the crash as they wait for the TSB's findings.

However, the Alberta Federation of Labour and the rail workers' union, the Teamsters Canada Rail Conference, have issued calls for an independent police probe into CP's role in the crash.

Bruce Campbell, a policy analyst and adjunct professor at York University in Toronto, said the federal government needs to intervene.

"The transport minister, the minister of public safety need to step in because … everybody's kind of passing the buck," said Campbell, author of The Lac-Mégantic Rail Disaster: Public Betrayal, Justice Denied about the 2013 runaway train that killed 47 people in Quebec.

The "Transportation Safety Board is going to find some answers in a year about the causes or at least a range of causes. But it's not going to tell the full story. It didn't do it in the Lac-Mégantic [case] and it won't do it in this case," Campbell said.

Underlying the controversy has been a lot of finger pointing over which police force has jurisdiction and responsibility.

The RCMP initially assisted but never did its own probe, deferring to CP as the local police of jurisdiction.

But the CP Police Service say they did a thorough investigation into the actions of the crew, which is now closed and resulted in no charges. The railway said the RCMP also has jurisdiction and is free to step in. The RCMP said it is reviewing the case to consider next steps in light of the recent CBC News reports.

All of this is leaving family members of the dead crew members marking the crash anniversary without anyone committing to launch an independent criminal probe of the railway's role in the tragedy.

"I want justice. I want CP to be accountable," said Les Paradis, a 39-year CP conductor and father of Dylan Paradis.

"There were three people killed. That's why we want a proper investigation," he said.

"This was a runaway train that took off like a jet. It's a joke. It should be investigated because it's going to happen again if they don't get it right this time."