Trans Mountain pipeline: Why some First Nations want to stop it — and others want to own it

Since the federal government bought the Trans Mountain pipeline for $4.5 billion from Kinder Morgan, a number of First Nations groups have opposed it — but several others are jockeying to operate it themselves.

Mike LeBourdais stands on top of the Trans Mountain pipeline where it crosses under his land. If anyone is aware of how controversial and polarizing pipelines are in Canada right now, it's the chief of the Whispering Pines/Clinton Indian Band near Kamloops, B.C.

Still, LeBourdais adjusts his cowboy hat and points up and down the valley as if he's addressing the 1,150 kilometre pipeline that carries petroleum products from Edmonton to Burnaby, B.C.

"I wanna own this thing," he announces.

Since 2018 when the federal government bought the Trans Mountain pipeline for $4.5 billion from Kinder Morgan, a number of First Nations groups have opposed it — but several others have expressed interest in buying it.

Lebourdais says he believes buying the pipeline is a once in a lifetime opportunity.

"It will change the First Nations along these valleys forever," he says.

LeBourdais, 55, represents the Western Indigenous Pipeline Group — a coalition of First Nations located along the Trans Mountain route in British Columbia that is determined to purchase the pipeline from the federal government.

The group wants a 51 per cent stake.

When asked why he wants to buy the controversial pipeline, LeBourdais' answer is as pointed as it is simple: "The same reason everyone else wants to buy it — because it is profitable.

"They [pipelines] are always profitable. They produce revenue and profit daily."

LeBourdais adds that profit from the pipeline, which in 2018 was an estimated $300 million, will lead to more independence.

LeBourdais' group has already had discussions with the federal government, and TD Securities has signed on to provide the billions it will take to make the purchase.

Though he won't yet reveal who it is, LeBourdais says his coalition has found a company to operate the pipeline.

There is time to work out the details of the purchase, LaBourdais says, but what matters most to him is how owning the pipeline would force a fundamental change in relations between First Nations and Ottawa. He says they'd be more like equals.

"We'd be included in the Canadian fabric," LeBourdais says.

"I wouldn't be talking about how my band needs drinking water. We have bottled water here, we have to pay for bottled water [because] the groundwater isn't safe to drink — it's not safe to shower in. So had we the resources, we'd be able to complete our water system."

A pipeline of reconciliation?

The Western Indigenous Pipeline Group is just one of the First Nations organizations interested in Trans Mountain.

The Iron Coalition has its headquarters in Calgary and represents some Alberta-based First Nations and Métis communities pushing to buy the pipeline.

"I think as First Nations people it's time that we get involved in owning these major projects," says Shane Gottfriedson, the B.C director of Project Reconciliation.

Project Reconciliation is making their pitch to as many as 300 First Nations from Saskatchewan, Alberta, and B.C. to buy a 51 per cent stake, and Gottfriedson says they have already made "a number" of presentations to government.

While he won't name the group's financial partners, Gottfriedson says they plan to offer as much as $11 billion for the pipeline — though he admits that number could change.

What does buying a pipeline have to do with reconciliation?

"We have always been on the short end of the stick," Gottfriedson says. "A lot of the resources that leave our territory — we never benefited from those resources.

"From a business point of view it makes sense to look at economic reconciliation."

For Gottfriedson, that means focussing on economic sustainability and First Nations creating their own wealth.

One of the key pillars of their proposal, Gottfriedson says, is to create what he calls a "sovereign wealth fund" aimed at investing in infrastructure and renewable energy projects in Western Canada.

'When that spill happens'

Not all First Nations in Canada see owning the Trans Mountain pipeline as a way to build a new relationship with Canada.

About 130 km to the south, on the banks of the Coldwater River, Lee Spahan explains why he's taking the federal government to court.

The Trans Mountain pipeline runs under the full length of his community near Merritt, B.C.

For Spahan, the chief of the Coldwater First Nation, the pipeline isn't about reconciliation — it represents the same old-same old relationship with Ottawa.

He says the government's approval of the plan to expand the Trans Mountain pipeline and increase its capacity from 300,000 barrels per day to 890,000 goes against his community's wishes.

Spahan says court cases are often the only way to get government to listen, and the Federal Court of Appeal has agreed to hear Coldwater's arguments.

"I invited the Prime Minister to come to Coldwater," Spahan says. "I want him to come look at why Coldwater has concerns and issues with this pipeline. But the invitation went unanswered."

Spahan explains that while many indigenous communities across Canada don't have safe drinking water, the Coldwater First Nation sits on an aquifer of potable water they can drink without treatment.

He says his community is determined to keep it that way.

They hired a groundwater specialist to map their aquifer and how the pipeline cuts through it.

"It's scary. It's a huge pipe right beside our water — right on top of our water," says Spahan as he points to it on a map.

The existing pipeline is more than 60 years old, and due to its age, Spahan says it's not a matter of if there is a spill, but when.

""You don't hear Canada or Trans Mountain saying 'we'll fix that problem and we'll put brand new pipe in there,'" he says. "They'll never do that, it's too costly. That's why I say 'when' that spill happens."

As for the Indigenous groups that want to buy the pipeline, Spahan says the idea is shortsighted.

"How is money gonna help you out when the water is gone? Or it gets contaminated? Are those groups gonna help us with that water?"

'We bear all the risk'

Back on the Whispering Pines/Clinton Indian Band territory, Chief LeBourdais says it is because of his environmental concerns that he's pushing so hard to buy the pipeline.

Ownership, he says, is the best way to make sure it's being operated safely.

"Right now we don't get any environmental updates or environmental reports [about the pipeline]," says LeBourdais. "We get most of our news — from the news.

"We want to be able to enjoy the equity first of all,  and then have the environmental oversight so we can rest comfortably that it's being operated safely," he continues.

"We have been shut out of that conversation since 1953. Not anymore."

LeBourdais also argues his group should take precedence over any other interested party, because he represents First Nations that live with the pipeline every day.

"The pipe's right over there," he says pointing to the road. "The other guys are from somewhere else. We bear all the risk."

If their bid is successful and his group becomes owners of the Trans Mountain pipeline, LeBourdais says it will be historic.

"You will hear me saying 'yippee' all across Canada, because it'll be a great day. It will demonstrate to First Nations that this stuff can occur in Canada." 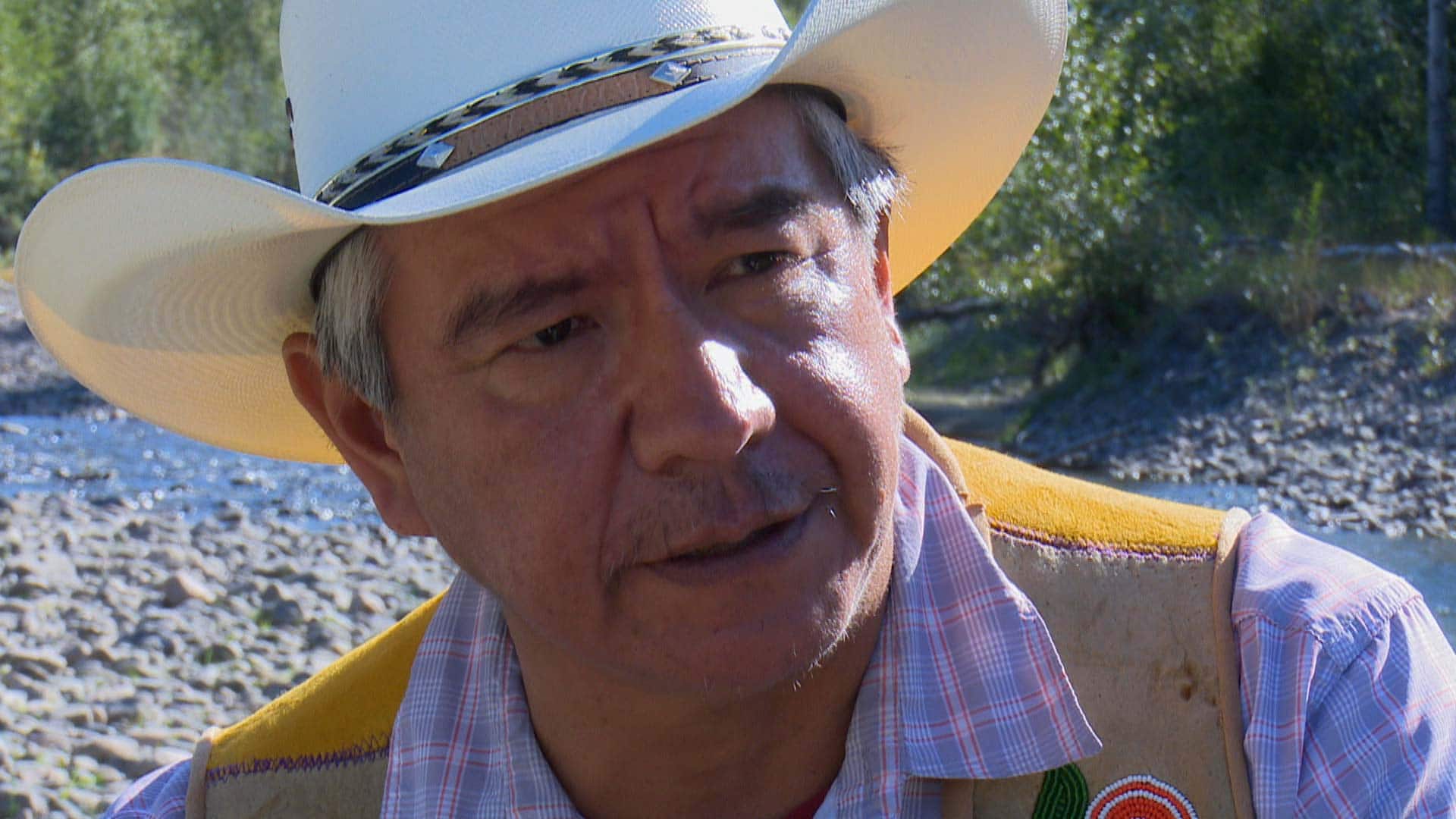 1 year ago
7:31
A group of Indigenous communities want to buy the Trans Mountain pipeline to help alleviate First Nations poverty, while others say the pipeline could leak and poison the water in their communities. 7:31
CBC's Journalistic Standards and Practices|About CBC News