Canada's Wonderland says it is building longest, fastest, highest roller-coaster of its type for 2019

​There was Behemoth, then Leviathan. And, next year, there will be Yukon Striker — the longest, fastest and highest roller-coaster of its type, according to Canada's Wonderland, which will debut at the Toronto-area amusement park in April.

There was Behemoth, then Leviathan. And next year, there will be Yukon Striker — the longest, fastest and highest roller-coaster of its type, according to Canada's Wonderland, which will debut at the Toronto-area amusement park in April.

The park in Vaughan, Ont., around 35 kilometres north of the city, unveiled plans for the new ride, which will feature a 1.1-kilometre track, on Wednesday.

The dive roller-coaster will lift riders up a 75-metre track and pause for three seconds before the first descent — forcing them to look directly down.

Riders will then drop straight down, hitting 130 km/h. 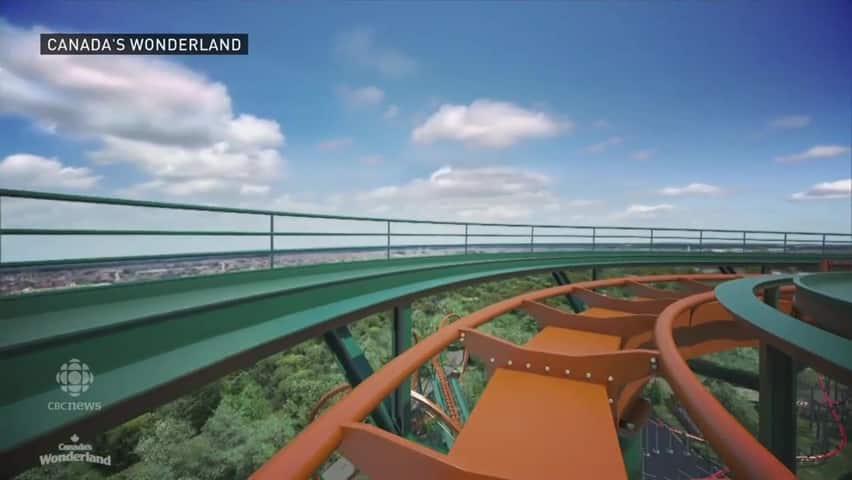 2 years agoVideo
1:10
Ride Yukon Striker in this tummy turning point-of-view simulation that plunges you 75-metres down the track at a top speed of 130 km/h. The roller-coaster will make its maiden voyage when Canada's Wonderland opens in April 2019. 1:10

"I think the drop is going to be the real draw for people," said Peter Switzer, the park's director of construction and maintenance.

"Most people will put their hands down for fear."

At the bottom, the floorless train will follow the orange steel track through a narrow hole in a man-made pond and into an underground tunnel.

"I think when you're up at that height, looking down, [the pond] will be a small postage stamp and a lot of people will be wondering how we're going to fit our train through that," Switzer said.

On the other side, the Gold Rush-themed ride will go back uphill into a series of inverted twists and turns.

Each train seats eight riders across, in three rows.

The straight vertical plunge is the signature of dive coasters, according to manufacturer Bolliger & Mabillard. The Swiss firm has built 115 roller-coasters around the world, but this will be the first dive coaster in Canada.

Canada's Wonderland is known for its 16 roller-coasters. Its recent additions include Behemoth, in 2008, and Leviathan four years later.

Yukon Striker will be the world's longest, fastest and highest dive roller-coaster, though other types of coasters around the world have even more impressive stats.

Crews started construction in January after 10 months of planning, he explained

The park says Yukon Striker is the "largest capital investment" it has undertaken in its 37 years of operation, but said it couldn't put a price on it because construction is ongoing.