'They didn't help me at all': Family files $1M lawsuit against York school board over racist bullying

The family of a high school student has filed a $1-million lawsuit against the York Region District School Board, alleging that administrators ignored ongoing racial harassment and physical attacks targeting a black student at a predominantly white school.

The family of a high school student has filed a $1-million lawsuit against the York Region District School Board (YRDSB), alleging that administrators failed to act on ongoing racial harassment and physical attacks against their child.

The lawsuit alleges the school board was notified of the incidents and threats on "many occasions" over the course of the current school year, but administrators never took appropriate action.

The sustained harassment ultimately led to multiple physical altercations that left the targeted student with severe physical injuries, including a concussion, and psychological trauma, the lawsuit also says.

"I don't think [the board] took it seriously at all," said Jacqueline Howell, the mother of the student.

Inside her sister's home in nearby Stouffville, Howell wiped away tears while recounting her youngest son's traumatic first year in high school.

"Myself and my son felt helpless," she said. "They didn't help me at all."

The lawsuit, filed on Friday, is the latest controversy around racism and discrimination to emerge at the beleaguered YRDSB since 2017.

CBC Toronto is not naming the student due to the family's ongoing concerns about his safety. He is named E.H. in the lawsuit.

The family says the incidents began in September, when E.H. started Grade 9 at Dr. J.M. Denison Secondary School in Newmarket.

Within his first month at the new school, E.H. became the target of several white students in Grades 11 and 12, his family alleges. He was told to "go and kill himself" and repeatedly harassed with racially charged taunting.

The bullying led to several fights between E.H. and the alleged perpetrators, some of which were shared on social media.

You can watch them below: 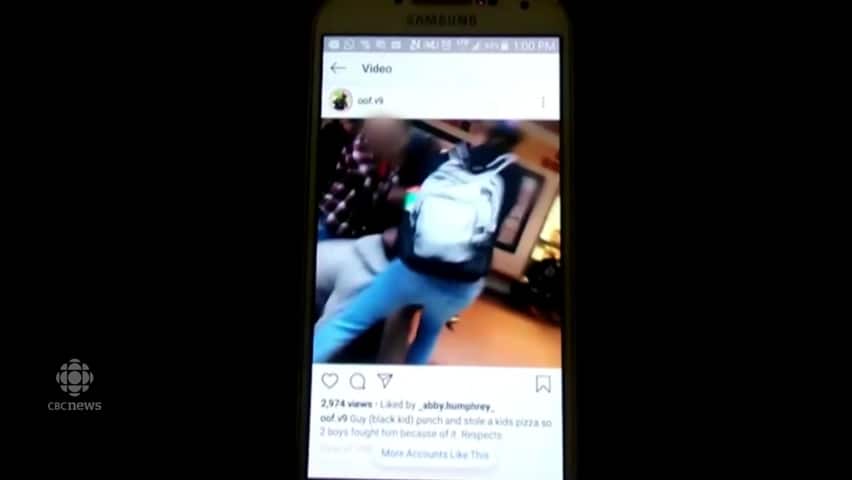 1 year ago
0:38
The student suing the school, E.H., was involved in several physical altercations during his year at J.M. Denison Secondary School. 0:38

One of the videos posted on Instagram features the caption: Guy (black kid) punch and stole a kids pizza so 2 boys fought him because of it. Respects."

The lawsuit alleges that incidents like this played out repeatedly throughout the school year, where racial taunting eventually escalated into violent physical altercations.

Starting in October, Howell said she made repeated pleas to have her son transferred to a new school, which she said were denied until he was finally allowed to transfer in April.

"They were trying to keep him in the school, knowing that this has been going on," she said.

"The result we have in this case is that my client is terrified for his life, and as a result refuses to come back to school," added Darryl Singer, the family's lawyer.

"We say, from a legal point of view, the school board is responsible for that."

The YRDSB declined to provide specific details about the case due to privacy concerns, but a board superintendent said efforts were made to work with the family.

"All allegations of racism are taken very seriously, and there's no question that this particular one was taken seriously," said Cecil Roach, the board's coordinating superintendent of Indigenous education and equity.

Roach said board staff met with the family several times during the school year. He added that appropriate punishment was handed down to the students who used racial slurs or physically attacked E.H.

"We can assure you that consequences were in fact applied to these young people," Roach said.

The lawsuit acknowledges that the alleged perpetrators were punished, but Singer argues that not enough was done to prevent the situation from escalating in the first place.

"That's where the systemic racism is; it's the school not acting to protect the student who's being bullied with racism and violent threats," he said.

While the YRDSB has emerged as a lightning rod of controversy in recent years, Singer said similar incidents of neglect are playing out at school boards across the GTA.

"Every single case is almost identical to the one we're talking about here," he said.

The school board says it's developing a new plan to help schools with "relatively small populations of racialized students" become more accommodating to students from all backgrounds.

"We know that the population of Newmarket is changing, and hence the demographic makeup of schools such as Denison will in fact be changing," Roach said.

The YRDSB is aiming to have updated strategies in place for the 2019-20 school year, which may include enhanced equity training for school staff.

"We continue to make Denison the kind of place where we want all out young people to learn and to grow," Roach said.