A two-alarm fire has been extinguished at a parking garage of a downtown condo building development after large plumes of smoke billowed into the sky just before the noon hour, according to Toronto Fire Services. 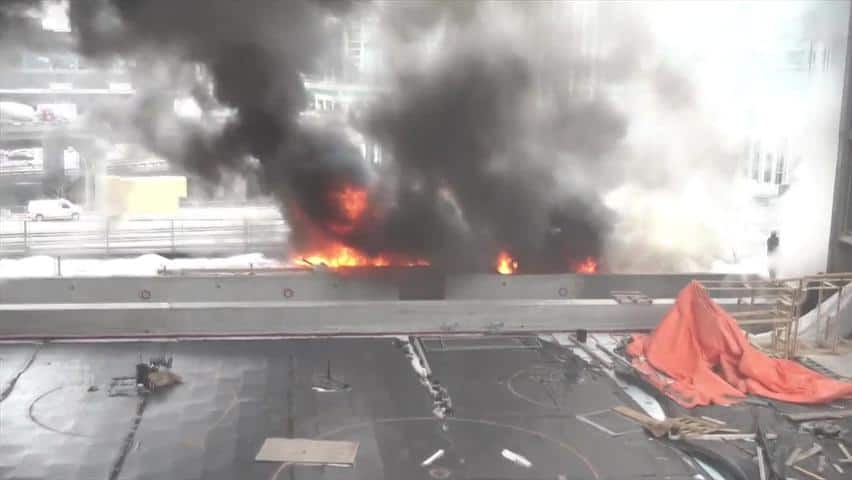 Large flames up close in downtown fire on The Esplanade

5 years ago
0:26
Viewer video sent in to CBC Toronto by Darren Lafreniere of fire at condo building on The Esplanade 0:26

A two-alarm fire has been extinguished at a parking garage of a downtown condo building development after large plumes of smoke billowed into the sky just before the noon hour, according to Toronto Fire Services.

Crews were called to the parking garage at the construction site of the Backstage On The Esplanade building in the Front Street East and The Esplanade area just before noon. The building is across from the Sony Centre for the Performing Arts.

The call was quickly bumped up to a second-alarm fire.

Approximately nine trucks responded to the call, according to Toronto Fire Services, and no injuries were reported.

Toronto Fire Services says roofing material, which is made up of a Styrofoam base with a rubber overlay, had caught fire, not asphalt on the roof as initially thought. Crews have confirmed the building is under construction.

Toronto Fire Services says all roads in the area have reopened and the cleanup is almost complete.

At one point, portions of Yonge Street, The Esplanade and Scott Street were closed.