A former Pan Am Games employee who alleges she was sexually harassed by former Ontario premier and TO2015 chair David Peterson says she is relieved to finally be speaking out after her dream job “turned into a nightmare." 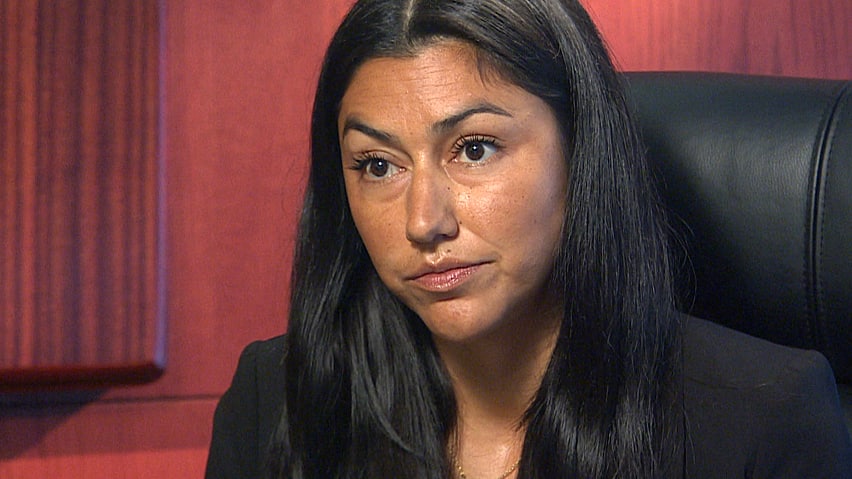 5 years ago
3:21
Employee alleges she was sexually harassed by former Ontario premier and TO2015 chair David Peterson. The allegations have not been proven in court. 3:21

A former Pan Am Games employee who alleges she was sexually harassed by former Ontario premier and TO2015 chair David Peterson says she is relieved to finally be speaking out after her dream job "turned into a nightmare" and she remained silent for more than a year.

In her statement of claim, she alleges that on several occasions, Peterson made inappropriate comments toward her that escalated into unwanted touching.

In an interview with CBC News on Tuesday, Morris says her superiors told her to let it all roll off her back.

Morris told CBC she was "really, really excited" to begin working for the Games in July 2012 as the executive assistant to the senior vice president of communications.

"[I was] super-looking forward to being part of such an exciting project in the city," she said.

It was in October 2013 that the harassment began, she alleges.

"Essentially it would just be really inappropriate comments, comments about my appearance which made me feel extremely uncomfortable and embarrassed and humiliated," she said.

In her statement of claim, Morris says that on one occasion she greeted Peterson by name and he replied: "Don't call me that. You call me 'handsome,' and I'll call you 'sexy.'"

In her statement of claim, she recounts another occasion during which Peterson asked her boss, "Isn't she gorgeous?" And at a volunteer launch event, Morris says Peterson told her three times that she should get up on a table and dance.

Morris told CBC that she never confronted Peterson about his alleged behaviour.

She had no intention of doing anything about the alleged harassment, she said. But after Peterson's alleged table dancing comment, she discussed it with Games CEO Saad Rafi. "And then things kind of snowballed from there," she said.

"In that conversation, Rafi told me that a leopard never changes his spots and this is going to happen to me again and again in my career and that we are all responsible for our own personal space," Morris said.

The conversation left her in shock, she said.

Her biggest fear, she said, was that her career would suffer.

"I told them that over and over and over again. And quickly, very quickly, it started doing exactly that," Morris said. "I watched it plummet right before my eyes and I couldn't do anything about it."

In her lawsuit, she alleges that she was demoted several times because of her allegations. Morris said she would ask why she was being moved from one department to another.

None of the allegations have been proven in court and the defendants have yet to file a statement of defence.

Peterson did not respond to CBC's repeated requests for comment. He told the Globe and Mail last week that the allegations are "wild and untrue."

A spokesperson for the Games declined CBC's requests for an interview on Tuesday. But in a written statement issued last week, the Games said all employees have a right to a harassment-free work environment.

"The TORONTO 2015 Pan Am/Parapan Am Games Organizing Committee (TO2015) has a commitment to provide employees with a safe work environment and a mandate to support diversity and inclusion in the workplace. We take these values extremely seriously," the statement said.

It went on to say that the team has only seen a draft of the statement of claim "which grossly misrepresents how management at TO2015 handled Ms. Morris' allegations. If necessary, TO2015 will defend itself in court. The organization will not be commenting further at this time."

'It's going to get ugly,' lawyer says

David Whitten, a Toronto-based employment lawyer who is not connected with Morris' case, says sexual harassment is extremely difficult to prove, and most cases are settled out of court.

The case is "going to get ugly if it ever gets before a court," Whitten told CBC. "I doubt that it will though, because these cases resolve themselves in mediation."

Morris says she wants to see two things come out of her decision to speak out. She would like "some sort of accountability" for what she says happened to her, and she hopes to encourage other women who have had similar experiences speak out.

"I've been quiet about this for 16 months, so to finally be able to speak about it I think in a way it's kind of hopefully going to help me heal," she said. "As I said, in a way I feel as though I've already won having broken my silence finally."