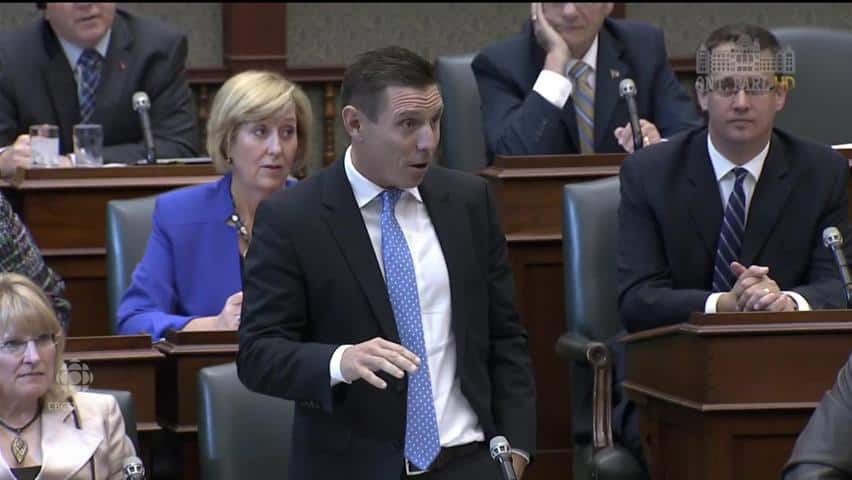 5 years ago
0:45
There was a heated exchange in Ontario's Question Period between opposition leader Patrick brown and Liz Sandals, education minister, about union payments. 0:45

Education Minister Liz Sandals said last week the multi-million-dollar payouts to unions were to cover costs such as meeting rooms and food during negotiations for new teachers contracts. When pressed for a detailed list of expenses, Sandals said unions weren't asked to provide receipts for the expenses.

"I'm not sure where the minister buys her pizza, but the pepperoni must be gold-plated," he said.

Wynne said this year's $2.5-million payments to teachers unions is a special case. Sandals told Brown in Question Period that the Mike Harris government similarly supported unions during bargaining processes when his government was in power.

"There hasn't been a provincial bargaining system in place before, this is the first time," she said.

Sandals is calling the payouts a "rather large investment" to get them to the bargaining table.

Sandals has defended the payments to the unions representing secondary teachers, English Catholic teachers and French teachers as being necessary because the transition to a new bargaining system made this round quite lengthy.

Sandals said today after question period that the purpose of the payments is "to support the meetings taking place."

She says for a transformation to work the first step is "to get the people into the building and committed to making the process work by being there, and in this case that's been a rather large investment."

The government revealed it paid $1.24 million to education unions for bargaining in 2008 and 2012 late on Friday. During that time, there were informal discussions as a precursor to the Liberal government enacting the new bargaining process.

The ministry has said that because those discussions were voluntary, it was appropriate to pay for the unions' participation — and this year it was necessary to help pay their costs to ensure a smooth transition to the new system.

Wynne said it's not unprecedented for a party in the private or the public sector to assist unions with the cost of collective bargaining.

Deputy Premier Deb Matthews told CBC Monday the government has not paid any other provincial public-sector unions money to cover their bargaining costs.

Details of how much of your tax $ Ontario Liberal govts spent to help cover education unions' negotiating costs. <a href="https://t.co/aMQi4iLNv6">pic.twitter.com/aMQi4iLNv6</a>

With files from CBC's Mike Crawley and The Canadian Press