Ontario Premier Kathleen Wynne blasted Progressive Conservative Leader Doug Ford on Wednesday, comparing him to U.S. President Donald Trump and saying he 'stands for nothing other than Doug Ford.'

Ford fires back, accusing Wynne of 'cronyism' and corruption

Ontario Premier Kathleen Wynne blasted Progressive Conservative Leader Doug Ford on Wednesday, comparing him to U.S. President Donald Trump and saying he "stands for nothing other than Doug Ford."

"Doug Ford sounds like Donald Trump and that's because he is like Donald Trump. Ugly, vicious, a brand of politics that traffics in smears and lies," Wynne told an audience at the Sunnybrook Health Sciences Centre in Toronto.

"He will say anything about anyone at any time. Because just like Trump, it is all about him."

Wynne read from a prepared statement after reporters asked for her response to Ford's Tuesday comments suggesting the premier would be in jail if she weren't in politics. 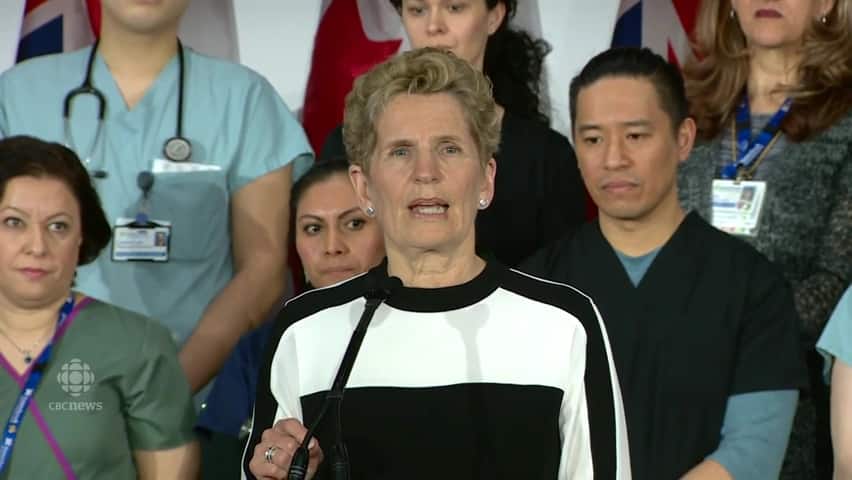 "If Kathleen Wynne tried to pull these kinds of shady tricks in private life, then there would be a few more Liberals joining David Livingston in jail," Ford said in a news release Tuesday, referencing the former Liberal aide who was recently sentenced to four months in jail for his role in the gas plants scandal.

Ford's statement came as he pledged to have an outside firm conduct a "line by line" audit of Ontario government ministries should the PCs win the June 7 election.

He fought back Wednesday, while speaking at a Cobourg, Ont., factory, accusing Wynne's government of "cronyism" and conducting "backroom deals."

He used scandals like eHealth and the cancelled gas plants to drive his point home, while also attacking Wynne herself.

"She's done nothing but destroy this province," he said.

While Wynne has previously alluded to Trump when talking about Ford and his style of politics, Wednesday's statement marks the first time she has directly compared the two.

However, it's just the latest example of escalating tensions between Ford and Wynne ahead of the formal election campaign.

"I think it's crystal clear that this is going to be a vicious campaign," Wynne said.

During an impromptu conference call with reporters Wednesday morning, PC MPP Lisa MacLeod called Wynne's comments "bizarre" and alleged it was a transparent attempt to distract voters from her own record.

"The campaign hasn't even started yet and Kathleen Wynne is already trying to scare people," MacLeod said.

"She's running in a different country against a different candidate because she can't defend her own record."