Hundreds of students from five high schools walked out of classrooms in Woodstock today, hoping to raise awareness about what they say has been a failure for school boards to take action following the suicides of five young people in the small southwestern Ontario city.

'Every [suicide] attempt … shatters this community,' says father whose daughter took her life 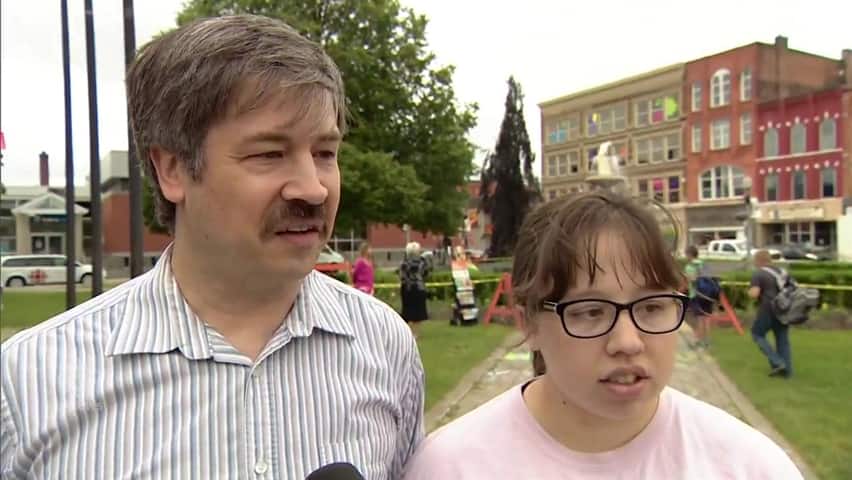 4 years agoVideo
1:19
Ron Bailey shares how his family is dealing with the loss of his daughter Mandy Bailey who died by suicide in February. 1:19

Hundreds of high school students walked out of class in Woodstock, Ont., today, hoping to raise awareness about what they say has been a failure for school boards to take action following the suicides of five young people in the city of 37,000 this year.

Students marched to a fountain in front of the downtown Woodstock Museum National Historic Site, gathering to share stories and discuss what can be done to help young people struggling with mental illness.

According to Woodstock police, 36 young people have expressed suicidal thoughts or attempted suicide in Oxford County (which includes Woodstock and seven neighbouring communities) since the beginning of the year.

And stories of student at risk aren't happening in isolation. For example, in April, a suicide crisis in Attawapiskat came to light, and members of the northern Ontario community have been urging governments to address what many see as a growing problem in smaller communities.

In Woodstock on Tuesday, the students in the rally spoke passionately about their struggles, particularly in finding counselling services.

"[Students] need people in the school specifically trained in youth mental health that people can reach out to," said Melissa Bailey, whose 17-year-old sister Amanda (Mandy) took her own life in February.

Moving from hopeless to survival to hopeful right now is the path that the youth of this community need to take. Every [suicide] attempt  … shatters this community.- Ron Bailey, Woodstock, Ont., father

Ron Bailey, father of Melissa and Mandy, said he also wanted to be at the rally.

He said his daughter, who struggled with bullying, would have benefited from more help.

"Moving from hopeless to survival to hopeful right now is the path that the youth of this community need to take," he said.

"Every [suicide] attempt  … shatters this community. It's too late to help Mandy, but we need the services there to help the others."

Woodstock Mayor Trevor Birtch told the rally that suicide is a "very tough subject," but he urged the students to keep sharing their stories and advocating for services.

"City council has recognized the issue from the very beginning, and that is why we have brought together so many of the agencies," he said.

"Even if it's on a temporary basis, we need to be able to treat kids here in Woodstock. Right now if they don't meet the criteria here in our community, at our local hospital, they're sent to London for London to deal with them. And you can imagine, London is already dealing with their own level of youth issues," he said.

The councillor said he has talked to Progressive Conservative member of the legislature Ernie Hardeman, who represents the riding of Oxford, about the problem and implored him to help the city obtain more mental health services for young people.

"One of my biggest concerns, and I stated this very early on, right now we're only about 15, 16 days away from the end of school. I don't know what the plan is," Shapton said.

"For some of these kids, school is their safe place. It's six hours a day that they aren't at home, if there are issues there. And it's a place where all their friends are. So again, I'm hoping over the next couple of weeks that the school boards and the mental health teams can create a plan and a process to get us through the months of summer."

School board officials plan to hold a public meeting on June 22 to let parents know what measures are in place to help students now and over the summer months.

Officials from Woodstock public, French and Catholic school boards have said they are consulting experts in the fields of teen mental health, suicide and trauma, and have been monitoring social media sites.

Magnitude of problem is a challenge: official

The superintendent of education at one of Woodstock's three school boards said he wasn't sure how many crisis workers there are at the city's five high schools.

"All I know is that there is a lot of clinical supports that are available within the community," said Paul Levac of the
French-language board Conseil scolaire catholique Providence.

"Since we only have students in our care for a quarter of the day, we have to ensure there are other supports and services within the community," he said.

"None of us are every prepared for series of tragedies like this. Every school board is equipped to deal with students in crisis, that's why we have clinical services, but the magnitude of what has probably occurred recently certainly challenges agencies and school boards."

"I just feel like students don't really have a say, which is why we planned the walkout," Gall said in an interview with CBC News prior to the protest. "I do believe it has a lot to do with bullying, for sure, and not enough awareness and help in the school system.

"We're walking out of school to prove a point," she said. "It's nothing really against the teachers."

Gall said her own struggles began when she was diagnosed with attention deficit hyperactivity disorder (ADHD) at age 12. She says she was bullied and faced accusations of being lazy.

She said empty classrooms will send an important message about teen suicide.

"One minute we're there and the next minute we're not and that's basically how the suicides are," she said. "You never know when it's going to be the last time that you'll see someone."

Gall said she hopes the walkout will lead to:

Jada Downing lost her 17-year-old sister to suicide last month. She participated in the walkout in hopes of dissuading others from making the same choice.

"It kinda felt like I was being stabbed in the heart a thousand times," Jada said about the moment she heard of her sister Kristi Wilkinson's death on May 28.

"I do believe that if she had reached out to someone, someone would have been able to help her."

'These kids have been through nightmares'

College Avenue Secondary School had posted a letter to parents about the walkout on its Facebook page. It said experts have told the boards that large gatherings present a risk for vulnerable students.

"They have advised us that assemblies and other large group gatherings of students should be avoided. Not only are they not effective ways of engaging the students, they can also be triggering for those students who are most vulnerable and can contribute to increased thoughts of suicide," the Facebook note reads.

The school says it is asking a representative from the Canadian Centre for Threat Assessment and Trauma Response to work with a small number of officials on "next steps for the community" and train a small group of professionals on how to engage the students.

Gail Evraire, a parent, created a Facebook group — Youth Suicide Prevention in Woodstock — for young people to talk about their problems and explain how adults can best help them cope.

"They're telling details," she said of the group. "These kids have been through nightmares. I've had parents contact me and tell me their tears are streaming, reading these stories from kids."

Mackenzie hopes the walkout and protest will help students in crisis see they're not alone.

"I hope that people are going to come together and see that this is an issue, that we do need to stay together and that our voices need to be heard."

If you're worried someone you know may be at risk of suicide, you should talk to them, says the Canadian Association of Suicide Prevention. Here are some of the warning signs: