Toronto police have apprehended a 60-year-old woman wanted in a downtown stabbing Thursday after rappelling down a highrise building to take her into custody. 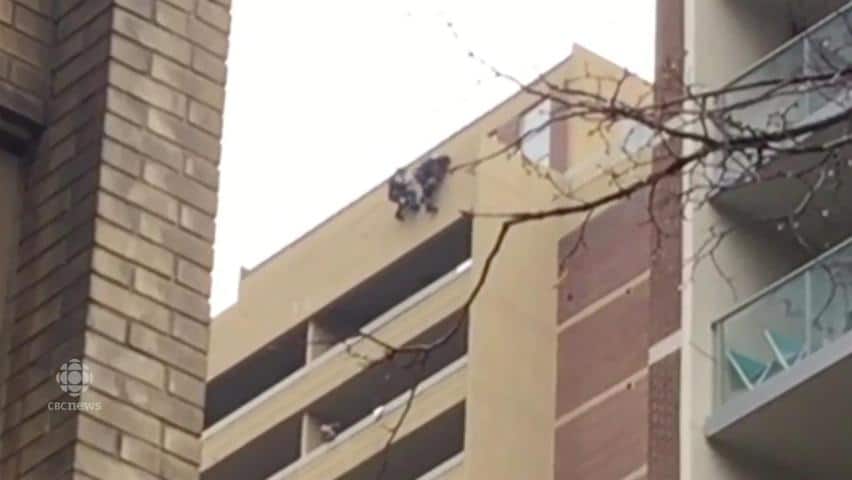 5 years ago
0:41
Toronto police have apprehended a 60-year-old woman wanted in a downtown stabbing Thursday after rappelling down a highrise building to take her into custody. 0:41

Toronto police have apprehended a 60-year-old woman wanted in a downtown stabbing Thursday after rappelling down a highrise building to take her into custody.

Police sources tell CBC News the woman was Ellis Kirkland, who was wanted in connection with the stabbing near Yonge and Bloor streets that left a man, 67, in life-threatening condition.

Kirkland is a Harvard-educated woman who has worked as a provincial lobbyist and is a non-governmental organization executive. She was taken into custody at about 3:30 p.m. at the building near Church and Charles streets.

Police negotiated with Kirkland for hours before two Emergency Task Force members rappelled down from the 28th floor of a hotel to the balcony on the 27th floor where Kirkland was located.

Police sources said Kirkland screamed when she saw the officers and tried to launch herself over the balcony. They stopped her and took her into custody.

A man was stabbed with a large kitchen knife in an apartment building in the Rosedale Valley Road and Park Road area around 7:30 a.m., police said. He is now in critical condition. He was rushed to a trauma centre initially in serious condition and his condition has deteriorated. He underwent an operation at the hospital.

Several residents have told CBC News the victim is the night-time concierge at the apartment building, although police have not confirmed that.

One resident of the building, Peter Thomsen, told CBC News that building management had told him the identity of the victim.

"I don't know him that well, but I see him in the morning when I go to work," Thomsen said.

"We just moved here, we've been here a year.… To think that one of your neighbours would do that. Yeah, it is shocking."

Police don't know what led to the stabbing. Police sources said the suspect and victim knew each other, but the stabbing was not a domestic dispute.

Const. Jenifferjit Sidhu of the Toronto police said the Emergency Task Force team brought the woman safely out of the building.

"Police have been here since before lunchtime negotiating with talking to a woman in crisis here at this location. She has now been taken into custody," she said.

Kirkland was featured in an Ottawa Life magazine article published in October 2014. The article says Kirkland has a masters of architecture in urban design from Harvard University, with a specialty in large-scale infrastructure development, and a bachelors of architecture from the University of Toronto.

Ottawa Life says she was the first female president of the Ontario Association of Architects.

The NATO Association of Canada, a non-governmental organization founded in 1966 to promote knowledge and understanding of the NATO in Canada, confirms that Kirkland is currently a vice-president.

Doug Knight, another vice-president, said Kirkland has been a member of its executive for 20 years.

Knight said he had no comment on the incident.

Kirkland is chair and founder of the NATO Paxbuild Economic Platform, a project of the NATO Association of Canada that is "designed to encourage peace and security through economic stability," according to an online profile.

Her LinkedIn profile says she was previously vice-chair of a private company, Kirkland Global Corporation, and president of the Kirkland Partnership, a Toronto-based architectural firm with expertise in architecture, urban design and planning.

Records from Ontario's Office of the Integrity Commissioner show Kirkland was registered in 2015 as a provincial lobbyist for two First Nations, Fort Albany and Kashechewan. The company listed was the Kirkland Capital Corporation.