A woman who died after being found without vital signs, partially inside a Toronto clothing donation bin, was remembered by friends as a bubbly person who struggled with homelessness and addiction.

A woman who died after being found without vital signs partially inside a Toronto clothing donation bin was remembered by friends as a bubbly person who struggled with homelessness and addiction.

Patricia O'Connell, executive director at Sistering, a west-end charity-run women's shelter not far from where the woman was found dead, confirmed the woman, named Crystal, had stayed there in the past.

"She was a lovely human being," O'Connell told CBC.

"We're all just devastated. Everyone here knew her."

Two other women who knew Crystal said she had battled medical and addiction problems but was working to get better. Both suggested she was likely trying to find some warm clothing at the time she was trapped.

Despite living a tough life, Chantal Mattix said Crystal, who was in her mid-30s, "was a very bubbly person."

Maria Ventura also remembered Crystal as a friendly face around Sistering, who was often eager to share a hug. Ventura blinked back tears when discussing Crystal's tragic death.

"How does somebody die from that? How?"

Police and paramedics were called around 1:30 a.m. ET to an apartment tower at 730 Dovercourt Rd., near Bloor Street, after receiving reports that a woman was inside the bin that sits in the building's parking lot.

Paramedics performed CPR but she was pronounced dead at the scene, Toronto EMS said.

The circumstances surrounding the incident do not appear suspicious and the death is likely accidental, police told CBC video producer Tony Smyth.

The woman's death prompted Mayor John Tory to announce he has drafted a letter to the chair of the city's general government and licensing committee, requesting a review of three aspects of the donation bin system:

"I think if we look at these broad questions, focusing now first and foremost on safety, but then looking at the whole question of whether this system still works and whether these boxes are properly located, will give us a thorough examination of this," Tory told reporters at a Tuesday morning press conference announcing a traffic safety blitz.

He expects the review won't take long, but did not indicate a specific timeline for completion and recommendations to be acted upon.

The box on Dovercourt Road was operated by B'nai Brith Canada, which issued a statement late Tuesday morning saying it runs a donation program that provides "lightly used" clothing to people in need.

"We are saddened at this terrible and tragic incident," media relations and communications manager Daniel Koren said in an email to CBC Toronto. "We are in direct communication with police on this matter."

Last week, The Canadian Press reported at least seven Canadians have died after getting stuck in clothing donation bins, prompting one advocate in B.C. to call them "death traps."

Late last month, a 34-year-old man died in a West Vancouver donation bin, while a 32-year-old man was found dead inside a bin in Cambridge, Ont., last November.

The bins' hatches are designed to prevent theft of donations. But they can also trap someone leaning in too far.

The spate of deaths has led some to call for the bins to be redesigned or removed. 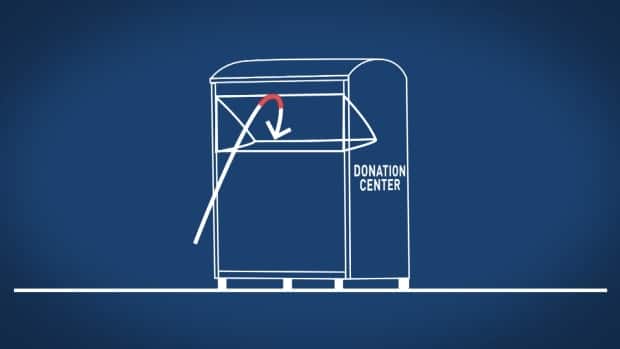 How a person can become trapped inside a donation bin

3 years ago
0:57
Vancouver Fire Rescue's Jonathan Gormick explains how the bin's design can be inescapable. 0:57

Loretta Sundstrom, whose 45-year-old daughter died in 2015 after getting stuck in a bin, told CBC Radio's World Report last week that she cried at news of the man's death in West Vancouver. She said something must be done about the bins' safety risk.

Following the man's death, West Vancouver closed all of its bins.