Mayor John Tory is confident he has in his arsenal an "ingenious" weapon in Toronto's long and losing battle against "the forces of raccoon nation that have defeated us for some time." 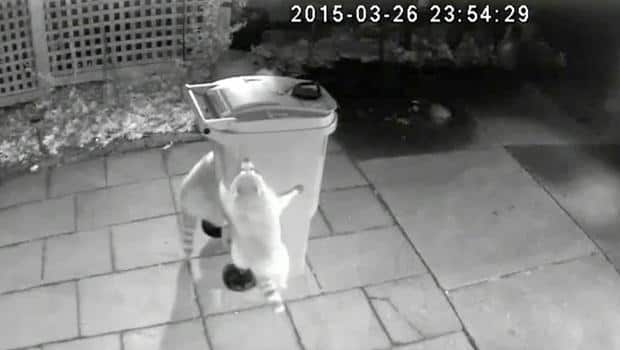 Mayor John Tory is confident he has in his arsenal an "ingenious" new weapon in Toronto's long and losing battle against "the forces of raccoon nation that have defeated us for some time."

At a news conference Thursday, Tory gleefully presented a video he says shows that the days of raccoons treating Toronto organic waste bins as a nightly buffet will soon be over.

The difference? A new design Tory says is resistant to even the most clever, bin-savvy raccoons.

"We are ready, we are armed. We are motivated to show that we cannot be defeated by these critters," said Tory with a hint of humour.

The city's video tells a tale of two green bins. The surveillance video first shows raccoons easily breaking into the bins currently in use. Later, the video shows raccoons as they try and fail to find their way into green bins the city expects to approve and put into service staring in 2016.

Tory admitted that residents' attempts to make the old bins raccoon-proof  — everything from homemade latches to bungie cords and the use of rocks and bricks as weights — have largely resulted in failure.

"You name it, people have tried it but the raccoons have adapted very well to city life," he said. He said the old bins are already at the end of their 10-year life span, offering the city an opportunity to improve the design.

He said the new bins are taller and more stable, making them a harder nut for the critters to crack.

If approved at committee and council, the new bins will be delivered starting in 2016 at no cost to residents. The old bins will be taken away by the city and recycled.

The bins will also have more capacity for trash.

"Most people can comfortably skip one collection day if they want to," said Tory.