Toronto Mayor Rob Ford anchored his Mississauga counterpart Hazel McCallion as she reeled in a fish. 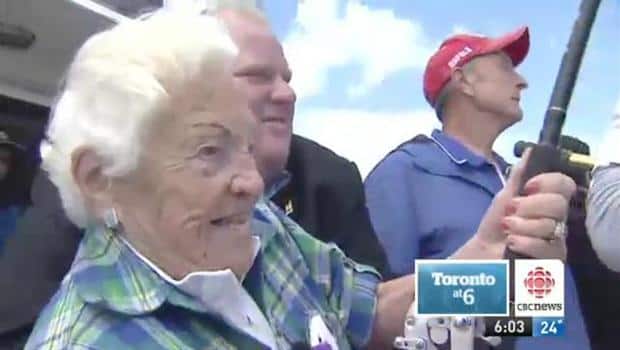 Toronto Mayor Rob Ford helped his Mississauga counterpart Hazel McCallion catch a fish yesterday by holding the 92-year-old as she reeled in a 16-pound salmon.

Both mayors were taking part in the Great Ontario Salmon Derby in Port Credit, Ont., when a fish took the bait on McCallion's line.

Ford kept McCallion from being pulled into the drink while she landed her catch. He administered a bear hug from behind, anchoring McCallion while the salmon pulled the line.

"She hooked into a big salmon and she almost went overboard. I'm glad that didn't happen," Ford told CBC News on Friday.

Ford said the situation was "pretty serious" and said he needed to make a "saving tackle" to keep McCallion in the boat.

"I guess I still have some football in me," he joked.

After the fish was caught, Ford applied a congratulatory kiss on McCallion's cheek.

"Thank you, Rob," McCallion said shortly after she landed the catch.

The pair have a history when it comes to fishing. McCallion, an avid angler, presented Ford with an 18-pound salmon she caught at the same event in 2011.