Voters at a few polling stations in Toronto, Ottawa and London, Ont., are reporting problems, mainly with the new machines being used to check voter lists and tabulate votes on election day.

Elections Ontario say 99% of stations working, paper ballots to be used if not, voting extended in 7 ridings

Voters at a few polling stations in Toronto, Ottawa and London, Ont., reported problems with new machines being used to check voter lists and tabulate votes on election day.

The glitches were causing long lineups, slowing down the election process, voters said.

There were reports of electronic vote tabulators not working, errors in electronic databases, internet connectivity outages, a fake training ballot being handed to a voter, and staff who were not well versed in the new machines giving long explanations on how to use ballots.

One voter in Ottawa said ballots were stuffed into a bag because a machine wasn't able to tabulate votes.

Weir said no votes had been cast in the polling station as of 9:30 a.m., and there appeared to be no contingency plan. He said he would come back later because he had to go to work.

"Long long line … and no votes cast yet," Weir said in a tweet.

“Problem with tabulator” at Spruce Court School in Toronto. Person who is calling trying to fix is on hold? Long long line.... and no votes cast yet. <a href="https://twitter.com/hashtag/OntarioElections?src=hash&amp;ref_src=twsrc%5Etfw">#OntarioElections</a> <a href="https://twitter.com/hashtag/vote?src=hash&amp;ref_src=twsrc%5Etfw">#vote</a>

In an email to CBC News, an Elections Ontario spokesperson said 99.57 per cent of all technology-enabled polls were up and running across the province.

"The few voting locations that are experiencing technical issues are being addressed, if they have not already been rectified."

Due to "unavoidable delays or interruptions," Elections Ontario has extended voting hours at polls in seven ridings:

The spokesperson said in the event of a problem, poll officials will revert to the traditional paper method to enable voters to cast ballots. That process is the same process in place at polls where technology is not being used for voting.

The process includes using a paper list of electors and the poll clerk manually striking off the name of the voter who has voted and updating manually a paper copy to identify names crossed out. Elections Ontario said all of its staff have been trained on this contingency process.

In one case, a University of Toronto grad student says she was shocked when she entered the voting booth to mark her choice and didn't recognize any of the candidate or party names on her ballot.

Gallant said she brought the problem to the attention of poll workers, who told her "someone must be playing a practical joke on you." They checked the remaining stack of ballots for any other anomalies and, finding none, handed her a real ballot so she could properly vote.

It turns out she had been given a training ballot used by staff to train poll workers on what ballots look like and how to fold them, Elections Ontario said.

In this election, Elections Ontario is using new technology — e-Poll books and electronic vote tabulators — to check the names of voters and to record and to count votes at half of all polling stations in the province.

An e-Poll book contains an electronic version of paper voters' lists, while an electronic vote tabulator electronically counts each ballot and generates results after polls close.

Cara Des Granges, spokesperson for Elections Ontario, said in an interview on Tuesday that the office had tested the technology in byelections.

"Elections Ontario has the utmost confidence in the accuracy of vote tabulators and has piloted them successfully in byelections," she said in an email to CBC Toronto.

"E-Poll books make it easier and faster for an elector to get a ballot. Vote tabulators automate the counting process for election officials. which provides faster and more accurate results."

Elections Ontario will retain paper ballots for manual recounts if required, she added.

In the Toronto riding of Beaches-East York, voter Liz Woodburn said there were two lines at the Toronto United Mennonite Church polling station, one for people with voter information cards and one for people without, and staff mistakenly directed voters with cards into the other line. The result was an even longer wait.

"I showed up shortly before 9:45 a.m. to extremely long lineups, which I've never experienced at that station before. It's a regular polling station. I've never had long lineups there," she said.

Woodburn waited an hour before she was finally able to vote after being directed to the wrong lineup. Once she got to the front of the line, her card was scanned in a second and she received her ballot quickly. She said the electronic vote tabulator seemed to working properly.

'I consider this an irregularity'

"I would say the staff were not consistently or effectively trained. People were being held up with long explanations on how to use the ballot. The people who didn't have a card were not getting processed. They were standing there for ages and it seemed like whoever was supposed to deal with those problems didn't know how to do it."

Woodburn said she saw about six people leave in frustration before voting. She reported the problems to Elections Ontario, which it said it would investigate.

"I consider this an irregularity," she said. "The thing I am most concerned about is I observed leaving without voting."

Long lines and people leaving in frustration were also reported at a polling stations in the Toronto ridings of Parkdale-High Park and University-Rosedale. 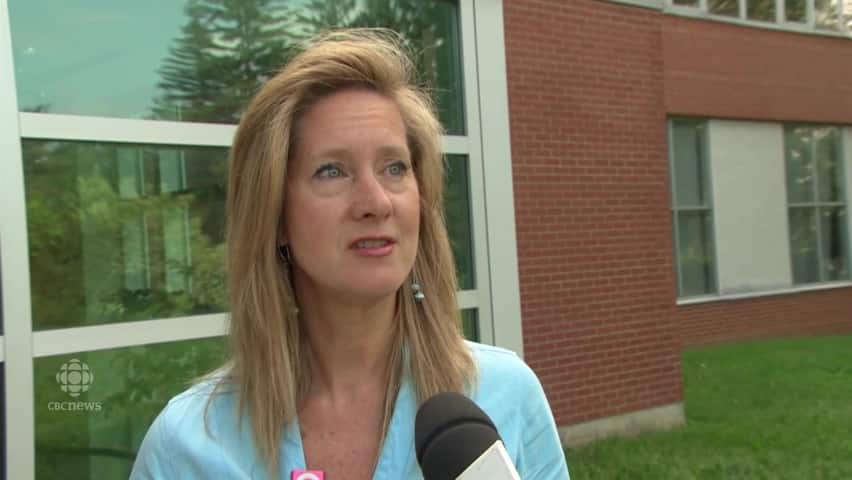 Computer trouble at the polls

2 years ago
0:18
Some voters, including Ottawa-Vanier voter Tatiana Paganezzi, are reporting computer trouble at polling stations. This is the first Ontario election where laptops with voter lists been deployed along with electronic vote tabulators. 0:18

Meanwhile, in Ottawa, Tatiana Paganezzi, a resident of Ottawa–Vanier, said she wasn't on the voters list.

"I wasn't in the database, apparently, even though I've lived in the area for six or seven years, and I've voted here before," Paganezzi said.

Pagnezzi said she was told computers were down, and that she would have to fill out a paper form to cast her ballot.

"It was quite quick, though, there wasn't a lot of people."

Ottawa–Vanier voter Michael Porter tweeted the machines at Colonel By Secondary School weren't able to tabulate votes, so officials were instead putting ballots into bags.

<a href="https://twitter.com/CBCOttawa?ref_src=twsrc%5Etfw">@CBCOttawa</a> The ballot reader wasn’t working at my polling station… They were collecting the ballots in a big bag. 😳

And in London, voters of London North Centre were lined up out the door at the Eastern Star Temple on Fanshawe Park Road East. One said the station was down to one functional computer early in the day.

"It's our first time using these computer systems, so of course there's been a bit of a hiccup," she said. "It is a new technology that we're using, but we've smoothed it out."

In Tillsonburg, 50 kilometres southeast of London, some voters who showed up at the town's only polling station were reportedly told to "come back later" due to computer problems.

Sheena Larmer and her husband were told by clerks that there were issues with the computers. They decided to go for breakfast, and when they returned, the polling station was still having problems, leading to a wait of around 25 minutes to cast their ballot.

"Oh, it was ridiculous. It was such a mess," Larmer said.

"Although I'm a really committed voter, I worry that there's a lot of people that would just say 'oh, forget this.'"

Many voters who commented on CBC London's Facebook page, however, said they had no problems voting on Thursday.