A CBC News investigation has uncovered allegations of electoral fraud concentrated in the Tamil community in the east Toronto riding of Scarborough-Rouge River.

Candidates point to problems with election-day additions to voters list 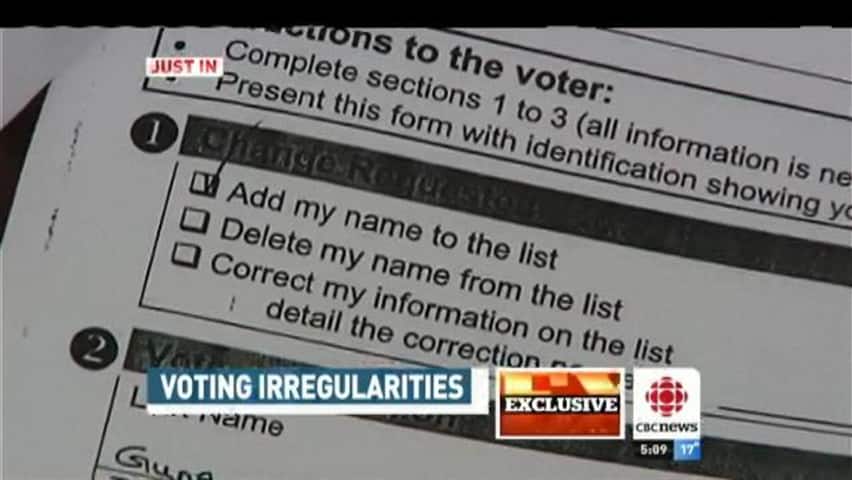 A CBC News investigation has uncovered allegations of electoral fraud concentrated in the Tamil community in the east Toronto riding of Scarborough – Rouge River.

The allegations, which span both the federal and provincial ridings, centre largely on what appears to be a lack of oversight surrounding election-day additions to the official voters list.

Only Canadian citizens are legally allowed to vote in Canadian federal and provincial elections, and even people whose names are on the voters list must provide identification before they vote. In a federal election, a  person who shows up at a polling station without ID can get a fellow constituent to vouch for them. In Ontario elections, voters without ID are asked to sign a form verifying they live in the riding.

It’s this polling-station process that lacks the most basic oversight, say candidates who spoke to CBC News. And the lack of oversight allows voters to illegally cast ballots in a practice the candidates say was common in Scarborough – Rouge River during last May’s federal election and in October’s  provincial election.

Marlene Gallyot, a federal Conservative candidate who lost to the NDP’s Rathika Sitsabaiesan, has complained to Elections Canada, alleging ineligible voters "by the dozens" turned up on voting day and filed ballots illegally.

"They came with a Future Shop bill," she told CBC News. "They came in with a Canadian Tire bill. They were coming in without proper identification."

Gallyot alleges that despite lacking the required ID, voters were still allowed to cast their ballots.

She also said scrutineers — party volunteers who oversee voting on behalf of candidates — were approaching voters at polling stations, speaking to them in Tamil and coaching them on who to vote for. Gallyot overheard such coaching inside and outside a polling station she was allowed to visit as an "observer," she said.

Gallyot was born in India but speaks Tamil as a second language. She told CBC she tried to put a stop to the alleged vote-coaching when she saw it but could not prevent it from happening at other polling stations.

"When they got to know that I could speak and understand Tamil, they were shocked, at least to some degree I was able to control it but there were too many polling stations."

Gallyot, who lost to Sitsabaiesan by almost 5,000 votes, outlined her complaints in a letter to Elections Canada.

"I have reason to believe that many had voted illegally," she wrote. "And most voters gave a fake address or fake identification in order to cast their vote for their chosen candidate."

Sitsabaiesan, in an interview with CBC on Tuesday, denied she or the NDP were involved in voter fraud in Scarborough-Rouge River.

Sitsabaiesan, whose election win made her the first person of Tamil origin to be elected to Parliament, said she has problems with the conduct of Conservative campaign workers during the election.

"None of my campaign volunteers did intimidate anybody," she said. "I do know of examples when the Conservative candidate's workers intimidated me. I witnessed them intimidating voters, threatening voters. I witnessed that myself."

Elections Canada responded to Gallyot's complaint and said they found no evidence of any wrongdoing by scrutineers at the polling station.

Even if Gallyot’s complaint sounds like sour grapes, she is one of a handful of Scarborough politicians who say voting irregularities are common in the riding, both at  the federal and provincial level.

Liberal MPP Bas Balkissoon captured Scarborough-Rouge River in the October provincial election but has also raised questions surrounding election-day additions to the voters list. The problems he points to are almost identical to those outlined in Gallyot’s complaint to Elections Canada.

"People have studied the system," Balkissoon told CBC News. "They have figured out that you can register at the poll without the proper documents."

He said part of the problem is that late additions to the voters list can be made with a driver's licence, utility bill or other identification that doesn’t verify citizenship.

"People came to the poll and showed improper ID and were given a ballot," said Balkissoon. "There was no process to verify citizenship."

Balkissoon carried out his own investigation, visiting addresses listed on voter registration cards.

"I started going to some of the doors to ask if the people [listed] live there," he told CBC News. "And they told me, ‘No, such and such a person doesn't live here.’ That got me very concerned."

Balkissoon also claims to have proof of voters casting ballots in adjacent ridings on election day. He’s filed a complaint with Elections Ontario but says he’s not heard back from them.

Balkissoon said any thorough investigation must come from elections officials at both the federal and provincial levels, who have the power to examine each declaration form.

Elections officials 'hide behind the law'

"The Elections Canada and Elections Ontario people hide behind the law because they know most of us cannot afford to take them to court," he said.

One man who worked as a deputy returning officer for Elections Ontario in October’s election told CBC News that poll workers were encouraged to allow people to vote, even if they lacked the required ID.

The man, who asked that his name not be used, worked at a polling station in Scarborough, serving voters who lived in a large residential building.

One after another, voters showed up without the required ID, he said.

"They would have a driver's licence to show that they live in Scarborough but [the address] wasn't for that particular riding," he said. "When we asked for a bill or a letter that shows they live in the building, they would say they moved in last Friday, for instance, and they don't have any paperwork to show, but that they would like to vote.

"After a while you see 10 or 12 you start to wonder, ‘Is this a trend or what?’ We found it strange that they come to the building they don't have anything to show you that they live there.

'Our job was not to turn anyone away'

"Even if they didn't have ID, our instructions were to register them. Our job was not to turn anyone away. So we'd register them and get them to vouch that they are who they say they are. They have to take an oath to say that."

Namu Ponnambalam ran as a candidate in a 2010 municipal election in Scarborough. He showed CBC News a suitcase of documents outlining 1,400 of the 3,500 names added to the municipal voters list on voting day.

Many of the names listed are Tamil. CBC confirmed that many of the addresses used on the voting forms do not exist.

'We need to fix this'

"More than 10 per cent of the voters [in that ward] came to the polling station on the day of the vote," he said. "That's a really big margin in comparison to the total number of voters."

"[Voters] only need to show some sort of an  ID to get on the voter list and then it will translate into federal voters list later on," he said. "So these illegal voters become legal voters within a few years time. Within two or three federal elections, they can take over the whole system in the Canadian democratic system. This is very shameful … we need to fix this."

Like Balkissoon, Ponnambalam said none of the checks required by election laws can provide proof that the voter is actually a Canadian citizen.

"As a citizen of this country, I'm really frustrated," he said.

"This is an organized group going door to door and campaigning not on the values of the Canadian political system. You are breaking down the whole democratic institution in this regard. You are teaching the next generation to cheat at voting. This is really bad."

'Time to blow the whistle'

He won the riding six times and says the allegations in the riding, combined with the continuing Robocalls scandal, are proof the election laws need tightening.

"It's time to blow the whistle," he told CBC News.

"We have all these voters lists with almost no one taking responsibility for their accuracy. It's a problem, it's enough to make me say ‘Let's go back to the old enumeration, let's make the list up every election."

With files from CBC's Jeff Semple