All 10 of those killed in Toronto van attack identified

The 10 deceased victims range in age from 22 to 94 and all of their families have been notified, Dr. Dirk Huyer, the chief coroner of Ontario, told reporters at Toronto police headquarters.

All of the people who died in Monday's deadly van attack in Toronto have now been identified.

The deceased were named at a joint news conference Friday afternoon with the provincial coroner and Toronto police, who also provided an update on the investigation.

The 10 deceased victims range in age from 22 to 94 and all of their families have been notified, Dr. Dirk Huyer, the chief coroner of Ontario, told reporters at Toronto police headquarters.

"[The families] have suffered a terrible and unspeakable tragedy that is unimaginable to everybody," said Huyer.

Here are the names of those killed:

Officials relied on scientific evidence, such as fingerprints, DNA and dental records, to identify the dead, said Huyer.

The majority of those fatally struck were women, with only two men among the deceased. Lead homicide investigator, Det. Sgt. Graham Gibson, previously explained this is also true for those injured.

Two foreign nationals were among those killed, Huyer said at the news conference.

Najjar was a Jordanian citizen and had only been in Toronto for a couple of weeks visiting his son. The Jordanian Embassy told CBC News he was also a grandfather.

Earlier, a family member confirmed to CBC News the identity of Chung, a University of Toronto student. The 22-year-old was born and raised in Canada to a Korean family and worked in sales at luxury retailer Holt Renfrew.

Friday marks five days since a white rental van tore down Yonge Street in North York, killing 10 people and injuring 16. Police said two people who were injured left the scene Monday but spoke to officials later in the week.

At least 12 injured people remain in hospital, said Bott. Sunnybrook Hospital told CBC News on Friday that five of the 12 remain in critical condition, while three are in serious condition.

Police also provided more details about the route the van took down one of the city's busiest streets at Friday's news conference. This was based on analysis of video surveillance footage and witness accounts. Police have interviewed close to 200 witnesses and sorted through dozens of photos and video evidence submitted by the public.

Minassian allegedly rented a panel van from Ryder before "directly" making his way to the Yonge Street and Finch Avenue around 1:30 p.m. ET, police say, and deliberately striking pedestrians.

Video surveillance footage revealed the van drove on the sidewalk for the "majority" of the time, said Bott. All but one of the 26 victims were hit there, he added.

Here's how police say the horror on Yonge Street unfolded: 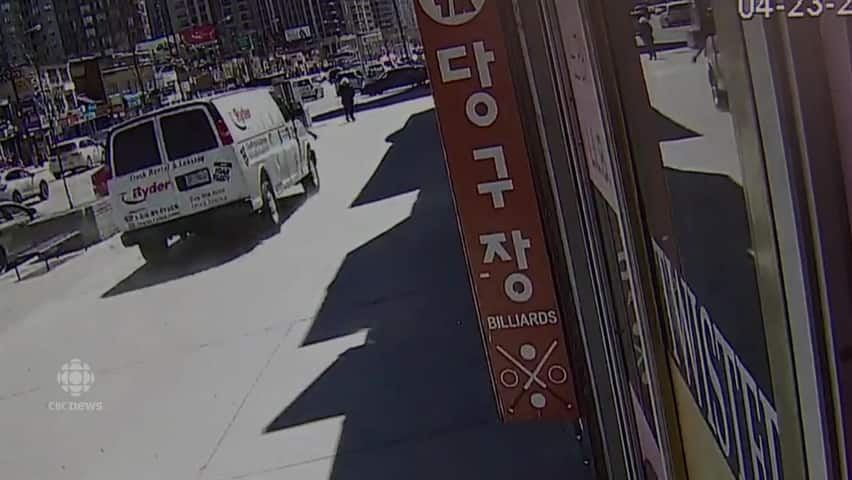 3 years agoVideo
0:07
Video surveillance footage shows a white van driving down a sidewalk in north Toronto before crashing into pedestrians. 0:07

A fund collecting money for victims and families in the wake of the attack surpassed the $1.2 million mark Friday.

The #TorontoStrong fund will distribute money to the non-profit charitable agency Victim Services Toronto — which offers help to victims of crime and disasters — as well as to other organizations that work on issues arising from the attack.

The fund was created in a partnership between the city, Victim Services Toronto and the Toronto Foundation to make sure donations were collected in one place and properly distributed to victims and their families.

"There's a lot of people asking, what can they do? Well, they can contribute to this #TorontoStrong fund," said Mayor John Tory in an interview with CBC Radio's Metro Morning.

Tory described the moment on Monday afternoon when he began to grasp what had happened.

"You sort of feel like you're in a movie, but it's real, and it's horrifying," he said. "And then I felt sick, I really did."

In the days since the attack, prayer services and vigils have been put together to give Torontonians a chance to heal together.

At 7 p.m. ET Sunday, a #TorontoStrong vigil will be held at Mel Lastman Square on Yonge Street, steps from where the attack took place.

Alexa Gilmore, a minister at Windermere United Church who helped organize Sunday's vigil, said on Friday morning that it will be a chance to "be together and hold one another in grief."

Six different faith leaders will speak, and "choirs from all over the city" will perform, Gilmore said.

The city is expecting 25,000 people to attend. Road closures will be in effect in the area beginning at 4 p.m. Sunday.

Acts of kindness big and small have sprung up around Toronto since the attack, with Torontonians distributing free flowers to lay at a North York memorial to the victims and organizing support campaigns.

After Sunnybrook Hospital put out a call for blood, donations surged at downtown Toronto clinics, increasing by about 19 per cent on Tuesday, Wednesday and Thursday.

"I just feel it's good to do something," said Rick Smith, who donated blood on Thursday and who lives in the Yonge and Sheppard area.

On Metro Morning, Tory said it's all evidence of the "strength of Toronto."

"The reaction that came was one of shock and horror, but also deep caring about the people whose identities and stories and families are coming out," he said.

You can read more about what we know about the victims of Monday's attack here.

A vigil will be held Sunday night to honour the victims of the van attack. CBC News will have special coverage of the #TorontoStrong vigil in Mel Lastman Square at 7 p.m. ET.

With files from Amara McLaughlin and Kate McGillivray