Hundreds of Toronto taxi drivers disrupted downtown traffic again today to protest Uber, as a judge questioned why the city was seeking a permanent injunction against the ride-sharing service. 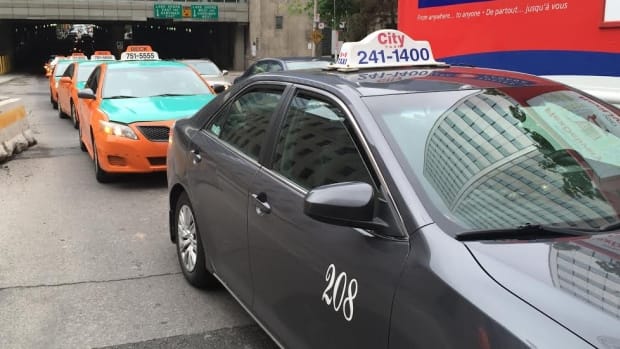 6 years agoVideo
0:43
Taxi drivers lined up on Yonge Street on their way to City Hall in a show of protest against ride-sharing app Uber. 0:43

The demonstration coincided with the beginning of a three-day hearing on the city's request to get a permanent injunction to halt Uber's operations in Toronto. Similar injunctions are in place in some other Canadian cities like Vancouver and Calgary, though others have embraced Uber as an inevitability of modern technology.

The company applied for a taxi brokerage licence through the city about a month ago.

The protest this morning began near the intersection of Yonge Street and Queens Quay before moving north up Yonge to Queen's Park, where cab drivers parked and honked their horns while other drivers spoke with media.

In recent months, drivers from various companies have staged similar protests against what they say is unfair standards for Uber, which does not pay the same fees to operate in the city or insurance costs as traditional taxi services.

Critics also argue that because Uber trips are not eligible under insurance plans that cover licensed taxi rides, the company's prominence puts the public at risk.

Uber doesn't own a fleet of vehicles, but instead has a service that connects customers to drivers who charge for the ride they offer. Uber co-ordinates the payments.

Mayor John Tory has repeatedly said he opposes the injunction and welcomes the new competition in an industry long dominated by just a few large companies. Uber does however need new rules that will not allow them to flout the city's rules for taxis, he says.

Uber has maintained that they are simply an app that connects people to drivers willing to take them where they need to go.

Judge asks if court is place for Uber dispute

In court today, a judge questioned whether court was the right avenue to resolve a dispute between Uber and the city.

Judge Sean Dunphy repeatedly cut off the city's lawyer, Michelle Wright, as she made her arguments Monday.

"You've passed a bylaw, you've revised it multiple times since the internet came on the scene — I'm highly interested if you've snared this business in your net," he said.

You have a group of drivers, but you cannot trap all of them in your net. You'd rather go after the Godfather.- Judge Sean Dunphy

"But is the court the right place to get political courage to change bylaws? ... It's not my job to help you."

Dunphy admonished the city for going after the company rather than the UberX drivers, who operate as a taxi without a license.

"You have a group of drivers, but you cannot trap all of them in your net," Dunphy said.

"You'd rather go after the Godfather."

Wright laid out the rules and regulations surrounding taxis, limousines and their brokerages.

Again, the judge fired back: "If you use Bell Canada to call a taxi, would you call them a taxi brokerage?"

"If Bell was used to make a phone call and they took a payment, they would indeed be a business that fell under our regulations," Wright responded.

Then she disputed Uber's claim that restricting its business is a violation of the company's charter rights — the freedom of expression.

"The city submits that the right to have an unlicensed taxi company doesn't go to any of the core elements of freedom of expression," she said.

"These are economic interests."

Uber applied for a taxi brokerage license through the city about a month ago, but didn't apply for a limousine license.