The TTC will retreat from a plan to extend the lease of a company that operates dozens of subway newsstands after a third-party review recommended that it should instead be soliciting competitive bids. 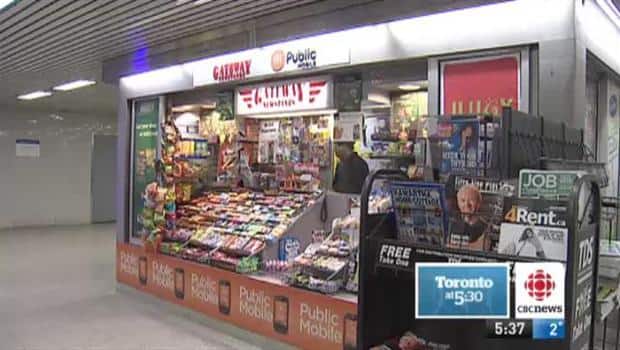 The TTC will retreat from a plan to extend the lease of a company that operates dozens of subway newsstands after a third-party review recommended that it should instead be soliciting competitive bids.

"The whole issue has become, you know, quite political and unfortunate," TTC chair Karen Stintz told reporters on Monday.

Stintz said she believes the organization will have to move forward with a request for proposals to determine who will operate the newsstands when the current leases expire next year.

"We're not landlords, we run a railway and so I'm hoping that once we settle this issue, we can go back to the business of running the TTC and making sure that our customers have the quality service that they expect," Stintz said.

The TTC had intended to negotiate a lease extension with Tobmar, which also operates a smaller number of lottery booths, bakeries and cafes in the subway system.

Tobmar had also wanted to consolidate its leases so they all had the same end date. The leases involving the newsstands expire next April, while the other kiosks have leases ending at varying times after that.

But the plan to negotiate a lease extension with Tobmar was panned by Toronto Mayor Rob Ford and other critics because it did not involve competitive bids.

After International News came forward with what Stintz described as an "unconditional" offer, she announced that the TTC would have a third party review both the proposal and the existing plan involving Tobmar.

On Jan. 30, Stintz said: "We're going to have a third-party review and you know what, if there's new information that comes to light, I will welcome it when it comes."

The Altus Group Limited was asked to undertake the review on behalf of the TTC and advise it whether to move ahead with the lease extension plan or issue new requests for proposals.

It subsequently recommended that the TTC issue new requests for proposals to "ensure the best offer terms are provided by the proponents."

The review, which CBC News obtained a copy of Monday, says that "at the current time, there can be no assurances that the best offer has been tabled by the three bidding parties as the process has not been open and transparent and consistently applied."

TTC spokesperson Brad Ross told CBC News via email that the Altus report was completed at a cost of $18,000.