U.S. President Donald Trump says he would "think about" inviting the NBA championship Toronto Raptors to the White House. He made the comment at a news conference Thursday following a meeting with Canadian Prime Minister Justin Trudeau in Washington.

The Toronto Raptors could be making a visit to the White House following their NBA championship win.

U.S. President Donald Trump said he would "think about" inviting the Canadian champs to Washington during a news conference Thursday following a meeting with Canadian Prime Minister Justin Trudeau.

"We thought about that, that's an interesting question," said Trump, while sitting next to Trudeau who was in Washington to discuss, in part, the ratification of the "new NAFTA" trade deal.

"They played phenomenal basketball — I watched a little bit of it , they were really terrific," Trump said.

He then turned to Trudeau and said: "Congratulations by the way, that was a great job by a great team." 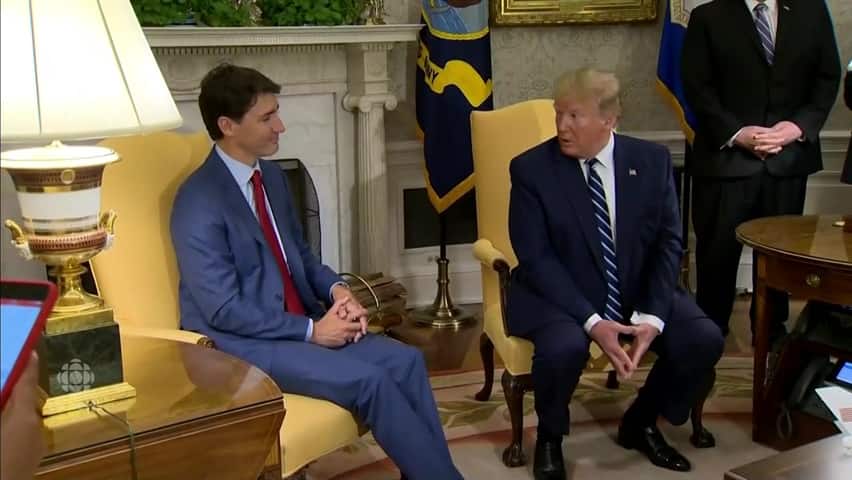 1 year ago
0:17
U.S. President Donald Trump made the comment during a meeting with Prime Minister Justin Trudeau in Washington. 0:17

'We are Canada's team': Nick Nurse

The potential invite follows news that a meeting was in the works for the Raptors to visit the prime minister in Ottawa.

Head coach Nick Nurse said Wednesday he had been in contact with Ottawa to schedule the meeting, but said he had "heard nothing about the White House."

At the time, Nurse wouldn't say whether he would accept a meeting with Trump.

"We are here. Let's go see Trudeau up in Ottawa."

There's a long tradition of professional sports teams scoring invitations from the president in the wake of a major victory. But whether that tradition extends to Canadian teams is unclear. The Raptors are the only NBA team outside of the U.S.

In 1992, George H.W. Bush welcomed the Toronto Blue Jays to the executive mansion after their World Series win, but the Jays' repeat triumph the next year resulted in no such visit during Bill Clinton's new administration.

Also, Trump's history of being at odds with several pro athletes could complicate a planned visit for the Raptors.

In 2017, players from the Golden State Warriors, NBA champions, snubbed an invite from Trump, who later rescinded their invitation. In 2018, Trump declined to invite the Warriors after they reclaimed the NBA title.

With files from Matt Kwong, The Canadian Press