A Whitby man has been charged for what police called a "wild" and "shocking" crash that was caught on dashcam video and posted online. 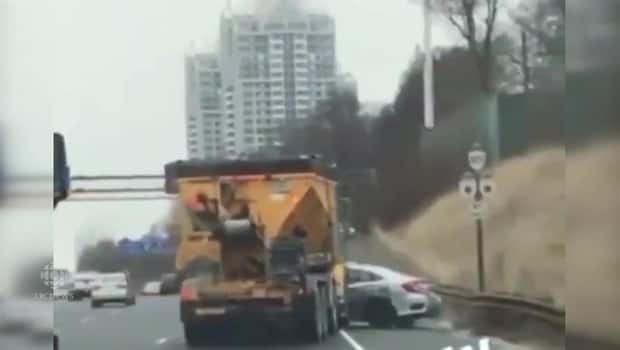 9 months ago
0:13
Police say they have spoken to the drivers in a highway crash captured on video. 0:13

A Whitby man has been charged for what police called a "wild" and "shocking" crash that was caught on dashcam video and posted online.

Ontario Provincial Police say the 50-year-old truck driver faces one count of careless driving for the Jan. 13 collision on a busy stretch of Highway 401 in Toronto.

The video shows the truck pushing a sedan sideways down the highway and onto the shoulder as traffic hums by.

The driver of the car, a 41-year-old man from Scarborough, suffered minor injuries.

"He was terrified. Honking his horn, yelling at the top of his lungs," OPP Sgt. Kerry Schmidt said earlier this month. "He's obviously worried as to how this could have happened in the first place."

At the time, Schmidt said that the truck driver said he hit the sedan while he was changing lanes and he couldn't see what was happening in front of him.