'They were the best of me': Woman who lost husband, 3 kids in Oshawa shooting speaks at funeral

The woman who lost her husband and three of her children in a shooting in Oshawa this month told mourners at their funeral Thursday that getting from one day to the next is sometimes "an impossible task."

Husband and children 'taken too soon, too violently and without warning,' Loretta Traynor says

Loretta Traynor watched from her wheelchair as four caskets holding her husband and three of her children who were fatally shot in Oshawa this month were taken into a church for a funeral service on Thursday.

Traynor, who was also injured in the Sept. 4 shooting, spoke alongside her surviving son Sam and said getting from one day to the next is sometimes "an impossible task."

"They were the best of me," Traynor said. "I have lost so many parts of me that make me a better person."

WATCH | Loretta Traynor speaks at a funeral service for her husband and three children: 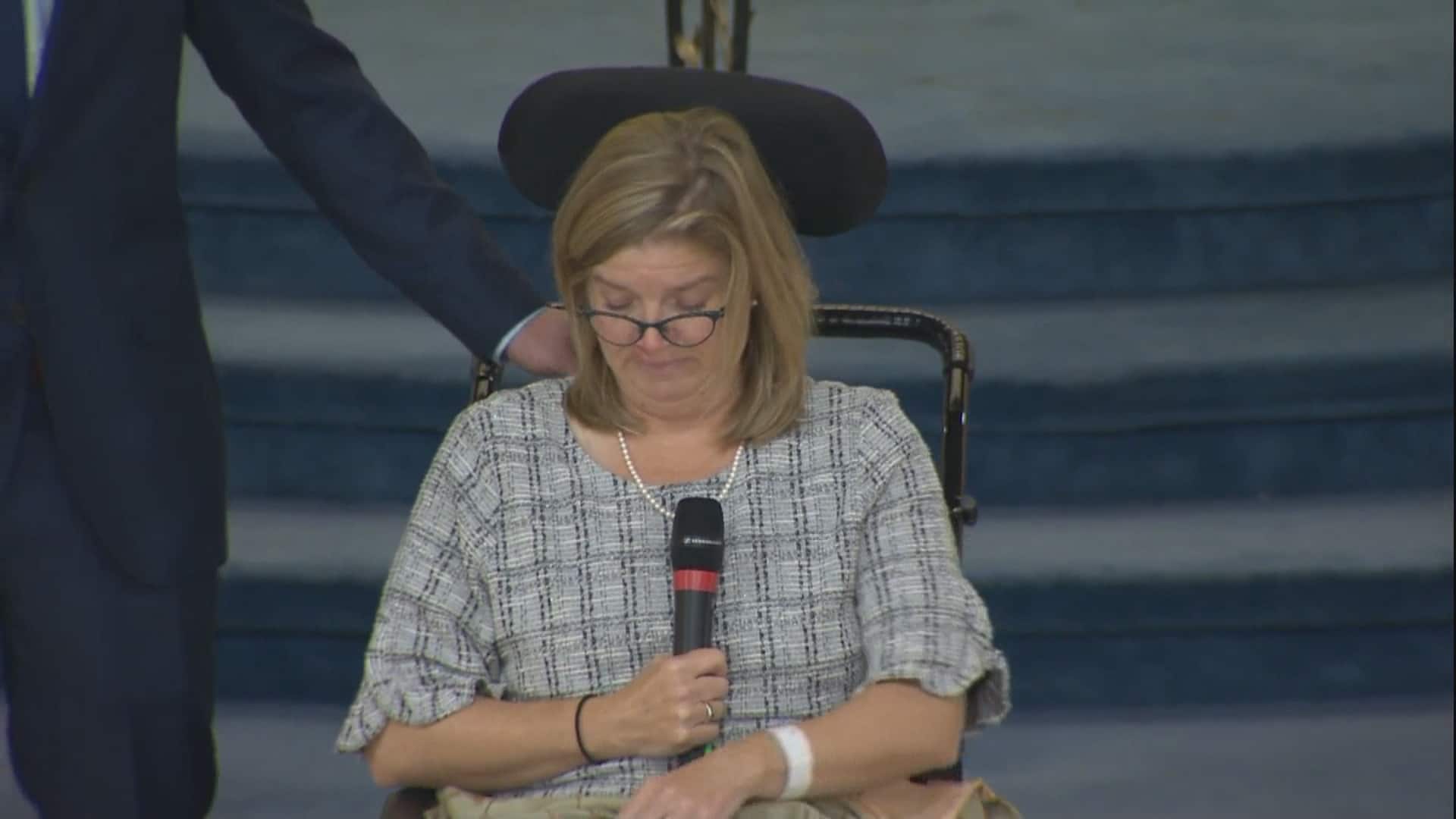 'I love him with everything I have,' says Loretta Traynor about her husband who died from a shooting, along with their 3 kids

1 month ago
0:58
Loretta Traynor speaks about her husband Chris and her three children Bradley, Adelaide and Joseph on Thursday. 0:58

She said the four were "taken too soon, too violently and without warning," adding that she won't accept that anything good will come out of this tragedy.

However, Traynor said the outpouring of support from her family, friends and the community has shone a new light into her loved ones' lives.

Fifty-year-old Chris Traynor and his children, 20-year-old Bradley Traynor, 15-year-old Adelaide Traynor and 11-year-old Joseph Traynor were killed in their home earlier this month. The shooter has been identified as 48-year-old Mitchell Lapa.. CBC News has reported that he was Loretta Traynor's brother. Police say Lapa died from a self-inflicted gunshot wound.

Court documents obtained by CBC News show that Lapa was largely cut out of his father's will and that his sister and her children were the main beneficiaries.

'The happiness that they brought us is greater than any evil'

Sam Traynor, the family's fourth child who wasn't home at the time of the incident, said the tragedy has been overshadowed by the good memories he has had with this dad and siblings.

"The happiness that they brought us is greater than any evil," he said alongside his mother.

"I wish with all my heart that it could have been longer and we could have all gone through life together."

Sam Traynor added that he wished his dad could see him graduate, that his brother Bradley could be the best man at his wedding, that he could see Adelaide grow up, and that he could laugh with Joey one last time.

WATCH | Sam Traynor, the only surviving sibling, talks about his family: 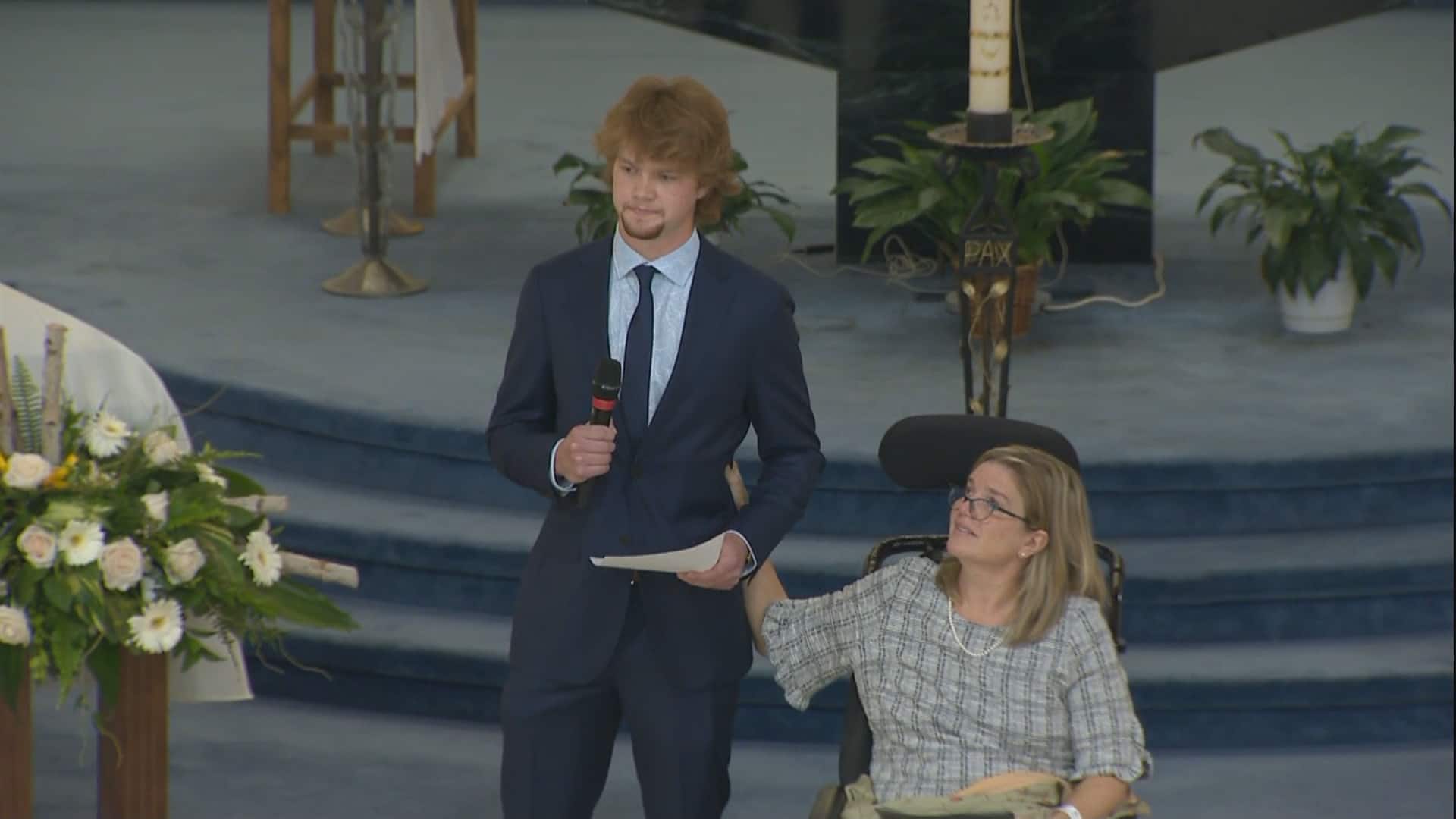 1 month ago
1:43
Sam Traynor, the family's fourth child who wasn't home at the time of the incident, spoke about his father and his three siblings at a funeral service in Oshawa. 1:43

For now, he and his mother are leaning on each other.

"You always hear that you don't know what you got until it's gone," Traynor said.

"But we always knew. We knew we were loved."

Family and friends wore masks and sat distanced in the pews of the St. Mary of the People Catholic Church in Oshawa, some wiping away tears as Loretta and Sam Traynor delivered their eulogies.

The funeral was by invitation only for family and close friends, but members of the public were able to participate in a drive-past visitation on Wednesday.