A former industrial stretch of Dupont Street is changing, but it’s not yet clear how it will look in the end. 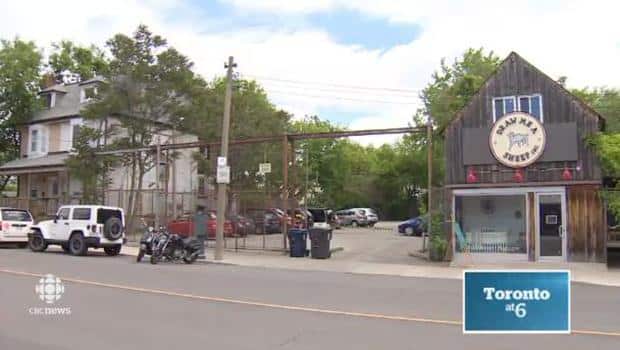 7 years agoVideo
2:06
Dupont Street has slowly been changing. More change could be coming. 2:06

A former industrial stretch of Dupont Street is changing, but it’s not yet clear how it will look in the end.

It's been three years since Sarah Baxter opened Fanny Chadwick’s, a diner along Dupont Street that is located between Ossington Avenue and Avenue Road.

"I saw its potential," she said of the once sleepy stretch.

"It has a lot of character because it has been industrial for so long. It's right close to downtown, it's not far from Bloor Street, so it's accessible to so many subway stops."

Despite its potential, Dupont has never been a popular thoroughfare for pedestrians. It’s traditionally been home to industry and currently zoned as employment land with no opportunity to build residential properties. That’s about to change.

The city has undertaken a Dupont Visioning Study, working with the surrounding community to emphasize parks and walkability. Residential permits are now allowed.

Along Dupont, there are two planning applications currently, with a third expected. In addition there have been six letters from other building owners asking to change their land uses to allow for residential mixed use.

"Because we have so many applications in, we can start thinking about how it happens on a street level," said Mike Layton, the local councillor for much of Dupont. "How wide is the sidewalk, how wide is the road, what else do we have on the roads, how can we improve things."

Layton said developers have "run out of easy sites in the downtown core," which has left them looking for other locations.

Of the proposals, Freed Developments has a plan on the site of a former printing press and food factory, Loblaws is exploring ideas around its parking lot, RioCan bought a car dealership it plans to develop and Sobeys is looking at putting condos in its parking lot.

"The question at this point is exactly what form that will take, both in terms of what the overall height is, but also where the buildings are actually placed," said Peter Smith, a planning consultant involved with three of these building proposals.

Click on the video above to see a full report from the CBC's Jamie Strashin.