Toronto Mayor John Tory has announced plans to introduce road tolls for the Gardiner Expressway and Don Valley Parkway, key highways that carry thousands of commuters in and out of Canada's largest city.

$2 per vehicle toll could raise $200M annually, with money earmarked for public transit 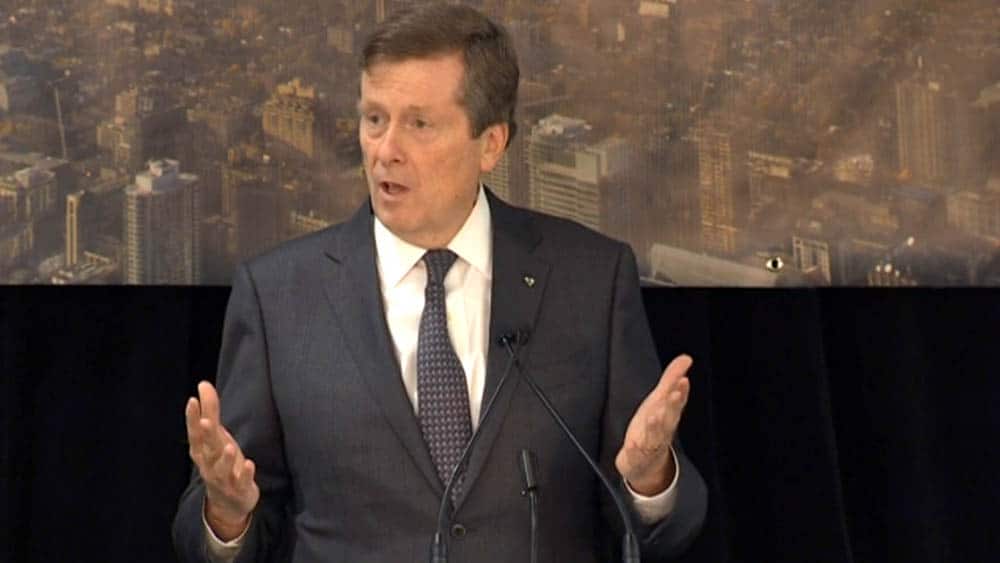 Toronto Mayor John Tory today announced plans to introduce road tolls for the Gardiner Expressway and Don Valley Parkway, key highways that carry thousands of commuters in and out of Canada's largest city.

Tory made the announcement in an afternoon speech, on "addressing Toronto's fiscal health," at the Toronto Region Board of Trade.

Tolls are necessary for the city to start chipping away at the $33 billion that is needed for major transit and infrastructure projects over the next 20 years, Tory said.

"For decades now, we have been under-investing in almost everything and those under-investments are having an impact on our residents and our city," Tory said. "We all see it. We all feel it. It's hard to get around. Congestion and commute times are choking our roads and our productivity."

"If we are going to tame the traffic beast, especially in light of our expected growth, it means starting to collect funds today for crucially needed transit for tomorrow."

Tolls are one of the suggested revenue tools in a report issued to the mayor's executive committee Thursday by city manager Peter Wallace.

Tory used the example of a $2 per vehicle toll, which could raise $200 million a year for city coffers. All of that money would be earmarked for transit expansion, but also key infrastructure projects, including renovating or building long-term care facilities and flood-proofing the Port Lands ahead of development.

"Tolls are paid in cities around the world, places many of us have visited," Tory said.

"Tolls have been shown to reduce travel times and ease congestion, and they also encourage people to take transit."

Tory also announced that he is not in favour of other proposals to boost revenue for transit and infrastructure: A parking levy and the contentious suggestion to sell Toronto Hydro, the city-owned electrical utility.

He also confirmed a previous pledge that an increase in property taxes is an insufficient way to raise funds for large infrastructure projects. Raising $200 million would require an increase of between five and 10 per cent, he said, which would put an unfair burden on homeowners and make home ownership even more expensive.

However, "on the Gardiner and DVP, these tolls would be paid by those who drive in and out of our city, as well as by our local 416 residents, sharing the burden among everyone who uses these city owned and financed roads," Tory said.

In a post-speech press conference, Tory was asked whether council would consider reintroducing the much-hated vehicle tax.

Tory will also push for a hotel tax to address the gap in operating revenue. The tax is expected to generate about $22 million a year that will go into general revenue.

Earlier Thursday, Coun. James Pasternak said tolls for Toronto highways are "long overdue" because without them, Toronto taxpayers effectively subsidize commuters who travel to the city from its suburbs and surrounding cities.

"It's very important that people coming into the city and out of the city pay their fair share," he said. "It's grossly unfair for the residents of Toronto to be subsidizing commuters from Mississauga and Markham and Vaughan."

Tory said as much in his speech, noting that 40 per cent of drivers who travel the DVP and Gardiner come from outside the city. Asking them to pay a toll just asks them to pay "their share" of transit and infrastructure.

"It's important that Mayor Tory understand the ramifications of his actions on business and tourism," Crombie said. "However, as Toronto owns the Gardiner and DVP, he is free to impose these tolls without input from his neighbours in the 905.

"I would caution him though that he must ensure that every penny of the money collected is reinvested into the repairs of the Gardiner and DVP, as well as into regionally-integrated transit projects that connect the 905 and the 416."

Tory was clear that the funds from highway tolls would not go into the city's general revenue stream. An independent body will oversee the infrastructure fund, he said, and it will be audited annually by the city's auditor general, he said.

Pasternak said he expects the tolls to have enough support to carry through council, but said a key to that support is ensuring the revenue remains earmarked for transit and not general revenue.

"If [the money] goes into one big black hole, cynicism creeps in and support for the revenue tools declines," he said. "The key is to make sure it's highly targeted to transit, it's the region's No. 1 issue. It's a major urban crisis."

Enid Slack, director of the Institute of Municipal Finance and Governance at the University of Toronto's Munk School of Global Affairs, said road tolls have benefits that go beyond raising money: they also influence drivers' behaviour.

"If people have to pay a road toll, they think about whether or not they're actually going to get on that road and take that trip," she said Thursday on CBC's Metro Morning.

But not everyone agrees road tolls are the way to pay for the transit needs of a fast-growing city.

Coun. Stephen Holyday represents a ward in Etobicoke, a west-end suburb that is now part of the city. He dislikes the idea of road tolls coming from the pockets of his constituents.

"I'm worried about some of the folks that I live by that travel into the city. Now it's going to cost them more," he said.

No plan for provincial tolls

At an unrelated transit announcement this morning, Del Duca said the province has not yet received a request from the city for toll road approval. He touted his government's plan to introduce high-occupancy lanes on some highways in the Greater Toronto Area. The lanes are limited to vehicles with more than one occupant as a way to encourage car-pooling.

"Once a plan [from the city] comes to the province, the premier and our government will review it very carefully," said Del Duca, who added that the province has no plans to add its own tolls to provincial highways.

"We all understand that we have to keep investing in transit to keep this region moving."