Mayor John Tory responded Saturday to criticism that he knew in advance about Premier Doug Ford’s plans to reform Toronto’s city council, saying he’s been “thrown under the bus” by his fellow councillors.

'I didn’t think this was put forward in a serious way,' mayor says

Mayor John Tory responded to criticism Saturday that he knew in advance about Premier Doug Ford's plans to slash Toronto city hall, saying he's been "thrown under the bus" by his fellow councillors.

Tory attended a transit event in Scarborough where he fielded questions about what he knew with regard to the premier's plans to reduce the number of council seats from 47 to 25, and when.

The mayor said Ford broached the idea of shrinking Toronto's council in a meeting in the premier's office two weeks ago, but it was more of a "musing" rather than a specific policy proposal with a timeline attached. Tory added that he told Ford it would be impractical to make such sweeping changes in the middle of an election campaign and then "the subject dropped."

"I didn't take it seriously because I didn't think this was put forward in a serious way," said Tory. "Obviously that turned out not to be true."

In an emergency meeting at city hall on Friday to discuss the premier's announcement, Tory got into a heated shouting match with Coun. Mike Layton, who made a comment implying that Tory had prior knowledge of Ford's plans and deliberately misled the council. Tory took issue with what he saw as the personal nature of Layton's attack.

How could Mayor John Tory not help the City prepare for the bombshell today? He admits he knew and did nothing to prepare. Instead allowed city to descend into chaos.

"I will not put up with people like Coun. Mike Layton challenging my integrity," said Tory, who also objected to Layton's use of social media to criticize Tory. "This is the kind of character assassination that goes on in politics that people don't like."

Tory said Layton and others should focus more on stopping the premier rather than attacking each other.

"We both share the same concern with respect to the process that is being employed here to take a fundamental change to do with the construction of our civic democracy without any consultation," said Tory.

He reiterated his openness to considering a proposal to shrink the council, but said the question should be solved through a referendum or other consultation process. 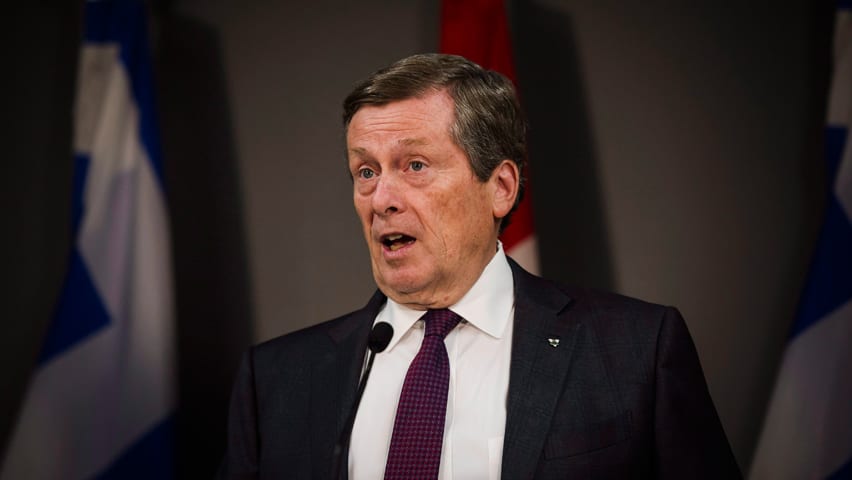 The premier's bombshell announcement on Friday that he will attempt to make the changes to Toronto's municipal government before the Oct. 22 vote caught many by surprise. It set off a flurry of political activity as two high-profile candidates registered to run in mayoral races in and around the city — former city planner Jennifer Keesmaat in Toronto and former PC leader Patrick Brown in Brampton.

The announcement has also mobilized significant opposition. Critics are upset about the lack of consultation over what would be the most significant changes to municipal governance in Canada's biggest city since amalgamation in 1998.

Several sitting councillors, council candidates and dozens of citizens rallied outside city hall on Friday evening to voice opposition to the reforms.

Anne-Marie Williams, a longtime Toronto resident, told CBC Toronto on Saturday the proposed changes are "unacceptable." She said consultation was not only important, but necessary.

"It's just unbelievable that you suddenly just walk in, and without consulting Toronto, you decide that this is what ought to be," she said.

Nick Gordon told CBC Toronto that he didn't disagree with the principle of reducing the size of Toronto's government, but the decision should be made with input from local leaders.

"To unilaterally make the decision and ram it through, I think, is an affront on democracy," Gordon said.

John Mascarin, a municipal law specialist, said there is not much opponents can do until the legislation is introduced in the legislature.

At that point, he predicts the city will try to challenge the province in some way, perhaps by getting an injunction to stop the new law from being implemented before the election.