Ontario's newly elected Progressive Conservative government is unilaterally moving to cut the size of Toronto's city council by nearly half — a move that Mayor John Tory slammed as inappropriate "meddling" in municipal affairs.

Ontario's newly elected Progressive Conservative government will unilaterally cut the size of Toronto's city council by nearly half — a move that Mayor John Tory slammed as inappropriate "meddling" in municipal affairs, while facing questions himself over what he knew and when.

Premier Doug Ford confirmed this morning that he would introduce legislation to reduce the number of councillors in Toronto from 47 to 25 to match federal and provincial riding boundaries.

At a news conference Friday, Ford said his PCs will move ahead with the plan before the Oct. 22 municipal election.

"Now, more than ever, the City of Toronto needs to get some big things done," Ford said.

He said council has "failed to act on the critical issues facing the city," calling it the "most dysfunctional political arena" in the country.

"It will only get worse if Toronto city council grows from 44 to 47 politicians," Ford said. "People care about getting things done, they don't care about politicians." 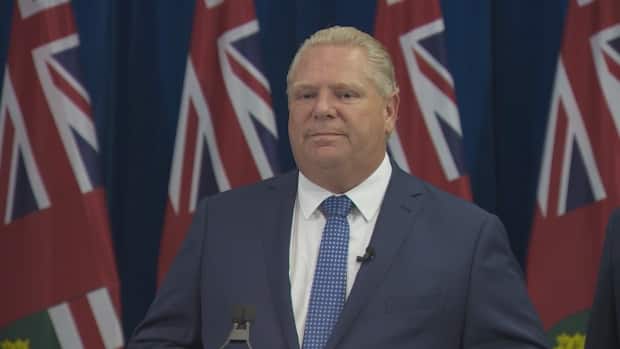 When asked why he didn't include this plan in his campaign messaging during the provincial election, Ford said reducing the size of government in general was a core message of his run.

If council is reduced to 25 councillors, it would mean that each councillor would represent, on average, 110,000 residents. In a release, the province said it would save the city some $25 million over four years, a figure equivalent to a fraction of one per cent of the city's total operating budget.

Ford did not answer a reporter's question on how the province came to that figure.

'Don't change the rules in the middle of the game'

During his own morning news conference at city hall, Tory accused Ford of "meddling" with the city's affairs, and said the premier should not be interfering as hundreds of people have begun campaigning and fundraising for a vote that is fewer than three months away.

"You just don't change the rules in the middle of the game," said Tory. 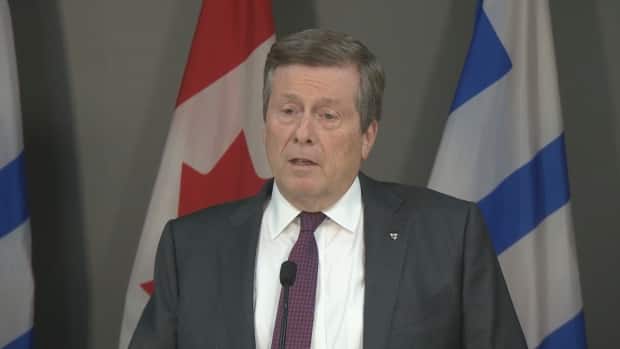 Tory then attacked Ford for ignoring his campaign promise to govern "for the people," noting nobody in Toronto had a chance to be heard about these apparent plans.

"Don't they deserve a say in how they're governed?" Tory asked.

He said specific details of the plan did not come up in any conversations he has had with Ford since the Progressive Conservatives formed government following the June election, with the exception of a "passing mention" of reducing council's size that Tory did not interpret as being a serious suggestion.

Ford, however, pushed back on Tory's assertion that the city was not given any forewarning of the province's intentions.

"I had a conversation with the mayor a week and a half, two weeks ago. I can tell you one thing, I didn't see this reaction when I gave him this idea, this proposal. To the contrary.

"Not only did we speak to him once, we consulted numerous times — our staff — and we never had this reaction … I'm not too sure where the mayor's going with this. He knows less politicians is good."

The issue came to a head during a testy exchange at city hall Friday night, when the mayor confronted Coun. Mike Layton, accusing him of "implying" that Tory had advanced knowledge of the move.

Some progressive councillors characterized Ford's move as an abuse of power and an attack on local democracy that would create chaos before the election, while other factions at city hall welcomed the idea as long overdue.

Speaking in council chambers after both Tory and Ford's press conferences, Coun. Janet Davis said the mayor "simply rolled over" to Ford's demands, and said the premier is displaying "incredible arrogance."

Ford's move comes amid a nomination period that has been underway since May, and was initially closing at 2 p.m. today but has now been extended to Sept. 14 — with the exception of the mayoral race, which still closes today.

That will leave Tory without any big-name challengers as he runs for a second term.

"I'm shocked to hear the only timeline that hasn't been extended is the mayor's ... the ground completely changed for every single other person here," said Davis.

Despite mounting criticism, Coun. Jim Karygiannis is among those supporting Ford's plan as a way to increase efficiency within the city.

As for where $25 million in savings could come from, Karygiannis said it would involve "cutting staff back."

"My office costs the City of Toronto half a million dollars to run," he added.

Karygiannis was one of 11 city councillors who attended an afternoon news conference to voice support for the provincial government's announcement.

Ford 'thinks he is the king of Ontario': Horwath

Official Opposition Leader Andrea Horwath, who strongly criticized the Ford government's plan when it was first revealed Thursday, once again blasted the premier, calling him a "dictator" who "thinks he is the king of Ontario."

"Ford is trying to rig Toronto elections to consolidate power in his own office," she said during an afternoon news conference at Queen's Park, adding it's an "assault" on the democratic process.

Horwath acknowledged that she sympathizes with some voters who, she says, are concerned the premier's decision was motivated by his desire to "settle past political scores."

"When it comes to the municipalities, he is simply going to railroad his own backroom, late night decision through this legislature and make changes to people's ability to have representation at the local level. That's not going to have any political consultation, whatsoever — it's disgraceful," she said.

As premier, Horwath explained, Ford has a "responsibility to engage the public in decisions that are going to affect their daily lives."

The potential changes echo a push Ford made during his time on city council while his brother, the late Rob Ford, was mayor. The pair fought for shrinking council to 25 seats but the proposal was shot down in a vote in 2013.

The premier's new proposal follows, instead, the recent expansion of the city's council. Toronto completed a years-long consultation and review process that increased the number of wards from 44 to 47 for the upcoming vote.

Tory signalled early on in the process that he did not, in fact, support an expansion in the number of councillors, but he accepted the outcome.

At his morning press conference, Tory said he will file a motion to hold a referendum on the question of reducing the size of city council in the form of a ballot question in the upcoming election.

Similarly, he added that he wants to get an objective legal opinion on what options the city has. That work will begin immediately. The mayor admitted, however, that the province does have "broad power" over the city.

So far at council on Friday, the only motion the mayor has filed is for "urgent consideration" of the province's plan, but a push to bump that to the top of the agenda failed to achieve the two-thirds of council support needed.

In addition to his plans for Toronto city hall, Ford also says he will cancel scheduled elections for regional chair positions in Peel, York, Niagara and Muskoka.

Former Ontario Progressive Conservative leader Patrick Brown, whose resignation this winter paved the way for Ford to take over the party, is running for the Peel seat, while former Liberal cabinet minister Steven Del Duca is a candidate in York.