The decision by Toronto city council to send three elephants from the Toronto Zoo to an animal sanctuary in California has apparently cost the facility its international accreditation with the Association of Zoos and Aquariums.

Care of animals was not an issue, association says 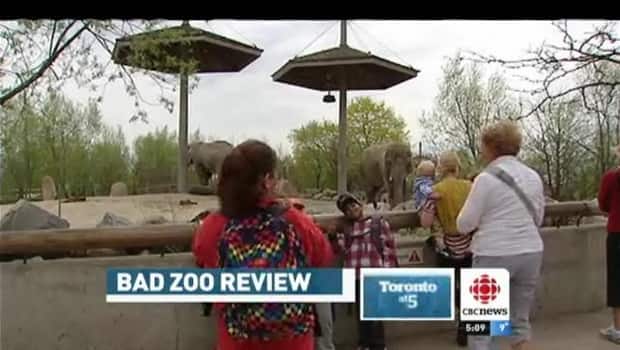 9 years agoVideo
1:55
The Toronto Zoo has lost its AZA accreditation. 1:55

The decision by Toronto city council to send three elephants from the Toronto Zoo to an animal sanctuary in California has apparently cost the Toronto facility its international accreditation with the Association of Zoos and Aquariums (AZA).

Toronto Mayor Rob Ford told reporters Wednesday that the full impact of the loss of accreditation is not immediately clear.

"We don't how it's going to affect us and we’ll see," Ford said.

An AZA spokesperson told CBC News that the zoo will not be able to "fully participate" in its programs as a result of the loss of accreditation.

Spokesperson Steve Feldman also said that the zoo’s loss of accreditation had to do with governance, and not with the way that animals were being looked after in Toronto.

Earlier, the AZA said council's decision "regarding the management of animals in the zoo's collection" fails to comply with several governing standards.

It was evidently referring to council's decision to send Toka, Thika and Iringa to the PAWS animal sanctuary near San Andreas, Calif.

Last year, the zoo's board decided to shut down its African elephant exhibit and staff was asked to find a new AZA-accredited facility for the three females.

In October, when no new home had been found, city council stepped in and voted to send the elephants to the PAWS sanctuary.

But the PAWS sanctuary is not an AZA-approved facility and that raised questions at the time if the AZA and its Canadian counterpart, the CAZA, would withdraw their recognition of the Toronto Zoo.

The loss of accreditation probably won't mean much in the day-to-day running of the zoo, but could have an impact on future loans of animals from other 225 AZA and CAZA-approved zoos.

About 200 animals are currently on loan at the Toronto Zoo, including snow leopards and Indian rhinos. The decision could also affect breeding programs, conservation and education programs.

John Tracogna, CEO of Toronto Zoo, said in a written statement that he was "clearly .... disappointed with the decision made by the AZA."

"There was never any question of the Toronto Zoo's animal care, governance was the key issue," he said.

He lobbied for the animals to be sent to a warmer climate — and eventually paid the cost of transporting the elephants to California.

The Toronto Zoo can reapply for accreditation in March 2013.