Plans are afoot to move the Toronto Zoo's three elephants to California starting this morning, according to the zookeepers' union, but it's still unclear whether any zoo staff will accompany or monitor the animals past the U.S. border crossing. 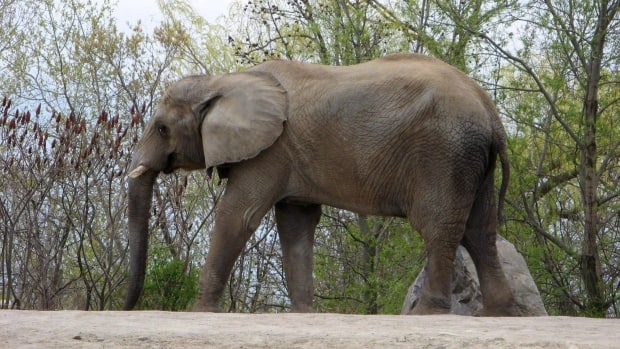 7 years ago
2:16
The Toronto Zoo is planning to transport its three elephants to California on Thursday, its workers' union says 2:16

Plans are afoot to move the Toronto Zoo's three elephants to California starting this morning, according to the zookeepers' union, but it's still unclear whether any zoo staff will accompany or monitor the animals past the U.S. border crossing.

That's because staff were asked by the company managing the move to sign a non-disclosure agreement vowing they wouldn't reveal anything about what might happen on the U.S. portion of the trip, said Matthew Berridge, a zookeeper and vice-president of the zoo workers' union, CUPE Local 1600.

"As of this morning, when we were informed that we were moving forward with the transport, there was no clarification that any zoo people would be going with the elephants. And after some discussion we managed to get our keepers... to follow the convoy," Berridge said in an interview last night with CBC News.

"Then at the border they asked that our keepers sign a disclosure agreement and not reveal anything about the transport beyond that point. So nobody could agree to that, so they at this point aren't going to be following past the border."

U.S.-based organization Active Environments is managing the transportation of the elephants, not the Toronto Zoo. Zoo spokesperson Jennifer Tracey confirmed to CBC News in an email that "zoo staff were asked to sign non-disclosure agreements in order to travel with Iringa, Thika and Toka beyond the Canadian border."

But Julie Woodyer, campaigns director at zoo watchdog group Zoocheck Canada, which has been involved in the campaign to transport the elephants to California, said that was "not true."

She said it's unnecessary for any zookeepers to go along because arrangements have already been made for two veterinarians and four elephant handlers to accompany and monitor the animals.

"They have been unwilling to work as part of a team, which is essential," Woodyer said of the Toronto Zoo keepers, who she accused of "trying to sabotage [the] move from the beginning."

Toronto City Council voted in 2011 to send the pachyderms to the U.S. facility after facing pressure from animal rights activists to make the move, partly because the aging animals aren't well-adapted to cold weather, and because the concrete floor of their enclosure is hard on their feet.

But the move was delayed on several occasions by clashes over where they should go, concerns about their future welfare at the sanctuary and worries by zoo staff and former management about how the elephants should be transported.

It is expected the trip to the Performing Animal Welfare Society's wildlife sanctuary in San Andreas, Calif., will take three to five days by road.

The original plan was to fly the three African elephants to their new home, but that was abandoned in July.