The city is preparing for possible flooding tonight and into Friday morning as much of Southern Ontario comes under a rainfall warning. 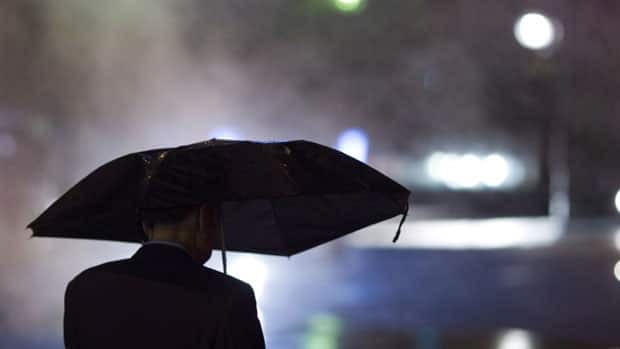 The city is preparing for possible flooding tonight and into Friday morning as much of Southern Ontario comes under a rainfall warning.

Environment Canada issued the warning Thursday, with up to 50 mm of rain possible in some areas. Most regions will see an average of 20 or 30 mm.

While severe flooding is not expected, city staff are preparing for the possibility, particularly in low-lying areas.

The city has also positioned equipment on the Don Valley Parkway to quickly close the thoroughfare if the road is washed out.

The city's aging water infrastructure has struggled to keep up with heavy rain recent years. But Perikleou said there will likely not be a repeat of the severe flooding in the summer of 2013 because the rain is expected to come down over an extended period of time.

"What we saw in July 2013 was mostly urban flooding, flashy thunderstorms and systems were overwhelmed. Today what we're seeing, fortunately, is a long, drawn out rain so we don't expect to see that quick emergency type of flooding on the roadways."

The approaching weather system also prompted the Toronto Regional Conservation Authority to issue a reminder to stay clear of rivers and streams during periods of heavy rainfall.

"It's very important whenever there's a rainfall that people stay safe near rivers, well back, 10 feet from the river banks," said TRCA senior manager of flood risk management and infrastructure Laurian Farrell.

"The river banks are very slippery, very soft, and it's very easy to fall into the water and not easy to get out."

The Environment Canada warning includes the Greater Toronto Area and extends from Belleville in the east down to Windsor and up to the Bruce Peninsula and Barrie.

CBC Toronto meteorologist Jay Scotland said thundershowers are possible in the early morning Friday but will likely clear by late morning. Winds in the GTA could exceed 70 km/h in the afternoon.