As the family of Sammy Yatim prepares to say goodbye to the teenager whose death has outraged many Torontonians, the life of the police officer who shot him has been changed forever as well. 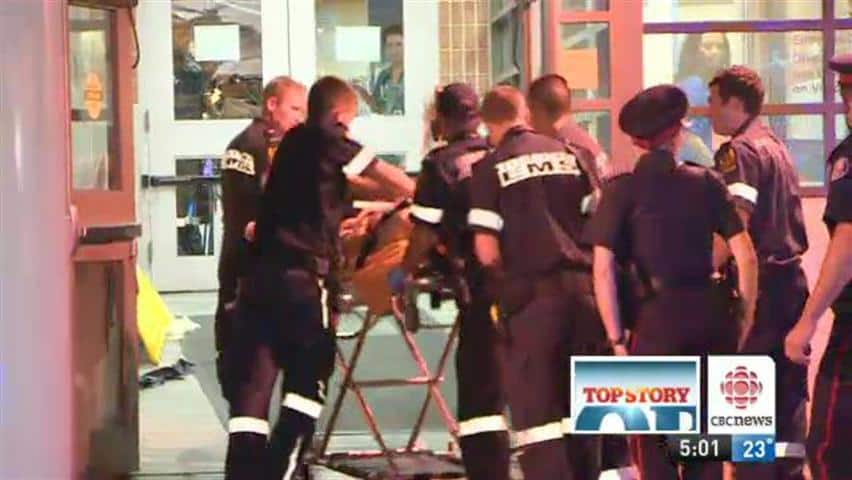 As the family of Sammy Yatim prepares to say goodbye to the teenager whose death has outraged many Torontonians, the life of the police officer who shot him has been changed forever as well.

Const. James Forcillo has been suspended with pay following the shooting that ended the 18-year-old Yatim’s life on a downtown streetcar four days ago.

The officer's lawyer, Peter Brauti, told CBC News in a brief telephone interview on Wednesday that Forcillo is devastated by what happened.

Like any officer who has been involved in a fatal shooting, Brauti said it is something that Forcillo will deal with for the rest of his life.

Brauti said the public must wait for all the evidence to come out. He also said there are many things the public hasn't seen yet, including the TTC video and other witness accounts.

Teen came to Toronto from Syria

Yatim came to Toronto from Aleppo, Syria, five years ago. He recently graduated from a Toronto high school.

His best friend, Zouher Amir Baurak, first met Yatim nine or 10 years ago, when they were in school in Syria.

He found out about Yatim’s death from a text he received from the slain teen’s sister.

"First, I thought it's a joke or something, but then I realized that it's actually true," Baurak told CBC News in a telephone interview from Dudley, England.

He said that Yatim's family is in shock.

Baurak said he last spoke to Yatim by telephone just over a week before he died.

After Yatim’s death, hundreds of people participated in a protest march that moved through downtown Toronto to the part of the streetcar line where the teenager was shot.

On Wednesday, Joseph Nazar, a friend of the Yatim family, said the teenager’s sister and parents are still in shock.

"They are trying to cope under the circumstances in the best way they can, but it's very hard and very difficult," Nazar told reporters on Wednesday evening.

As hard as it is to believe, Nazar said there is no changing the reality that Yatim is dead.

"We have to accept the fact he’s gone. He’s no longer here," Nazar said.

A funeral for Yatim is planned for Thursday morning and a visitation is taking place on Wednesday night.

Ontario Ombudsman André Marin said that despite promises from Toronto's police chief and union that they will co-operate with the provincial investigation into Yatim's death, that is typically "the exception, not the norm."

Ontario's police watchdog, the Special Investigations Unit, is looking into the incident. The SIU investigates any incident involving police when someone is killed or seriously injured, or when allegations of sexual assault are raised.

Marin, a former head of the SIU, is taking a close look at this case to determine whether a wider investigation by his office is warranted, and says it may even be time for the province to direct the Toronto force about how to deal with calming crisis situations.

"I think we've reached a point where I'm going to be assessing whether, if the police as Big Brother can't fix the problem, is it time for the province as Bigger Brother to direct the police on how to do their job?"

Marin told CBC Toronto's morning radio program Metro Morning that he reacted in disbelief to the killing of Yatim.

Yatim was alone on a stopped streetcar and armed with a knife when he was shot at nine times, then stunned with a Taser. The confrontation was caught on video and has been viewed more than a million times, sparking anger at what many see as a disproportionate response by police.

Marin said Toronto police are not under his direct purview, but provincial police training facilities and the SIU are. If he launches an investigation — a decision he'll likely make within two weeks —  he'll look at how the province is dealing with training.

"There have been literally dozens of inquests that have recommended measures to de-escalate this kind of conflict — better training for the officers, for example," he said. "What has the Toronto Police Service done with the results of those inquests? What has the Ministry of Community Safety and Correctional Services, the provincial government, done with the results of these inquests?"

He'll also monitor the co-operation between the SIU and the Toronto police, but said for now he wants to keep out of the SIU's way while it investigates.

A two-part investigation dealing with each issue separately is possible, he said.

Lawyer Peter Rosenthal has dealt with many police shooting cases, including the death of Michael Eligon of Toronto, who was shot last year while holding scissors.

Rosenthal said that police still haven't learned how to deal with these kinds of situations.

"Until they really police the police, it's not going to change, it appears," he said.

With reports from the CBC's Steven Bull, Ivy Cuervo and Steven D'Souza