Police were called to the scene of a parking lot in the Black Creek Avenue and Eglinton Avenue area on Wednesday morning after a Jaguar was buried up to its windows by a sinkhole.

Driver pulled into parking lot and pavement gave way beneath him

A Toronto driver was forced to escape through a car window after his Jaguar was partially swallowed by a sinkhole early Wednesday.

Mario Tavares told CBC News he pulled into the parking lot of a building he owns near the intersection of Todd Bayliss Boulevard and Industry Street near Black Creek Drive and Eglinton Avenue West. 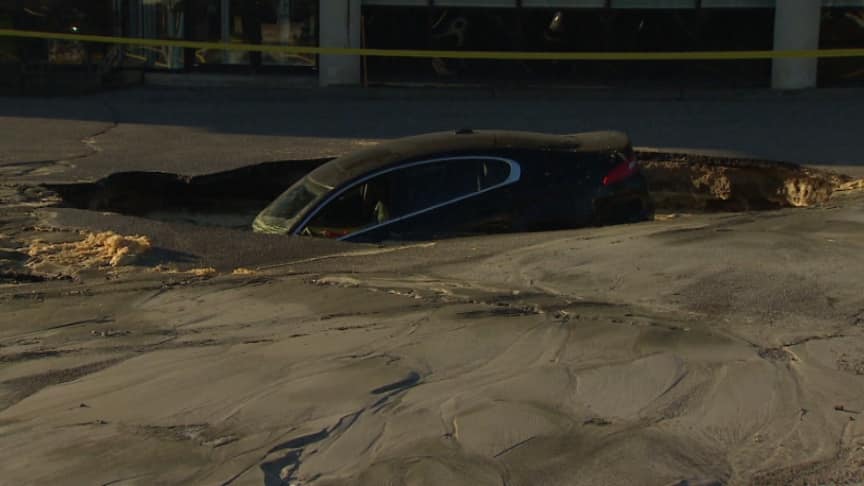 Tavares said shortly after pulling into the parking lot, the pavement gave way beneath his car, which sank in the soft dirt up to its windows. The door wouldn't open, forcing him to escape through the car window and onto the hood.

"I tried the door, the door wouldn't open so I rolled down the window and went out through the window," he said.

No one was hurt in the incident.

It's believed the sinkhole was caused by a watermain break. A nearby printing business is closed for the day.

Metrolinx has confirmed the sinkhole is not related to the construction in the area for the new Eglinton-Crosstown LRT light-rail line.

Upon seeing the news this morning and learning that the driver is OK, the CBC.ca audience added their quips about the incident on Twitter.