Toornto's bylaws concerning restaurant patios are confusing and hard to navigate, says one local restaurateur who has ended up in a bureaucratic mess. 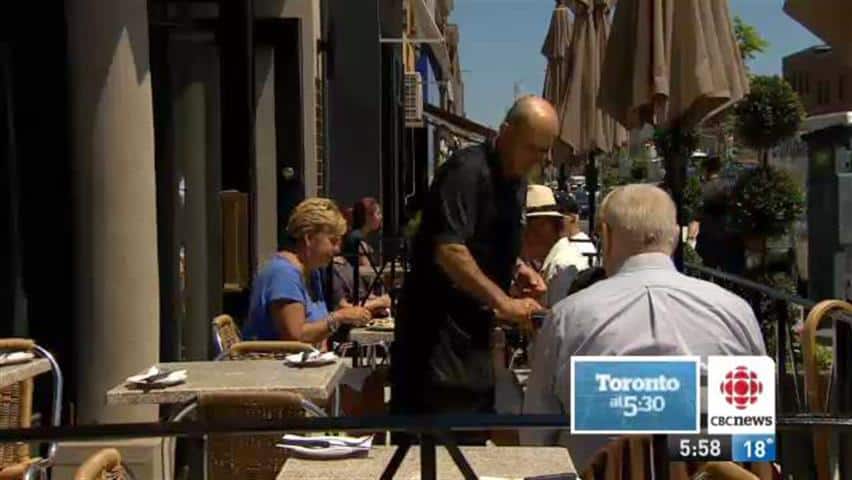 Sometimes it might just be better to give up — especially when you're trying to add a patio to your restaurant or cafe in Toronto.

Geoff Polci wants a licence but he's caught in a bureaucratic mess trying to get a patio license:

"I've done two other patio applications and this one by far is the most difficult," he said.

"Patios tend to get pretty crowded in the city so there's not too too much space," Polci said.

Polci says so far the application has cost him $1,000 in fees, an encroachment permit for the awning and the electrical certificate for the lighting.

And for all that, Polci says he's been told he can have a patio that's one metre by two metres:

"I don't think you could fit a table and chairs in there," he said.  "It's so small. it's really pointless you know."

The licensing department says its main concern is whether a patio leaves two meters of sidewalk for pedestrians.

"They have to meet the specs in terms of clearances from the curbside that has street furniture that blocks access," Richard Mucha of Municipal Licensing and Standards.

Another challenge with applying for a patio license is that there are different rules if you're applying in the old city of Toronto, or in Etobicoke, or Scarborough.  Something the licensing department says it is in the process of streamlining.

Polci points out that the rules don't seem to be applied equally.

"We're surrounded by other restaurants establishments that have patios that come out far enough that they can have quite a few tables and chairs, but for whatever reason they've decided that we can't."

Business owners can appeal the licensing department's decision to their local community council.