Torrential rains wiped out the possibility of a normal morning commute for many Toronto drivers as the Don Valley Parkway was left impassable by water and mud. 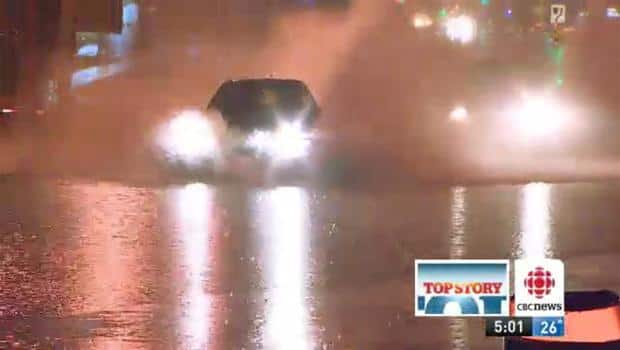 Torrential rains wiped out the possibility of a normal morning commute for many Toronto drivers as the Don Valley Parkway was left impassable by water and mud.

The DVP is a major expressway that connects the Gardiner Expressway into the downtown area with Highway 401.

By 8 a.m., water covering the expressway had started to recede, but the road surface was coated in mud and debris in places. The southbound DVP reopened by mid-morning and the other side of the expressway later in the morning.

"It’s the first time I’ve seen it in my 30 years that we actually had water cresting almost up to the jersey barrier of the Don Valley Parkway," said Bowman. "So we had to put in a closure until that water dissipates."

Photos and video footage from CBC reporter Tony Smyth taken at the height of the flooding showed vehicles trying to move through rain-covered streets, with water as high as vehicle doors in some spots.

A total of 60 millimetres of rain had fallen in Toronto by 2 a.m. ET, but by 6 a.m., the downpour began to ease off and a heavy rainfall warning for the area was lifted.

CBC meteorologist Claire Martin said that a series of storms ripped through the Greater Toronto Area in two waves overnight, the second of which hit the region just a few hours before the morning rush hour.

"That's really what put everybody over the edge — we were saturated at that point, we really didn't need that much more in the way of wet weather," she reported.

GO Transit, which carries some 259,500 passengers on a typical weekday, suspended train service at Oriole and Old Cummer stations on the Richmond Hill line due to a flooded track.

The City of Toronto received more than 300 calls on Wednesday relating to reports of flooded basements, sewer problems and other issues.

The heavy rains also kept roofers busy on Wednesday, as they scrambled to respond to calls from homeowners whose homes took a beating during the overnight storm.

"Lots of people stopping to take a look at this and they're all saying the same thing: 'I've never seen anything like this,'" Dunn reported.

Dunn also reported seeing a minivan that attempted to drive through the high water after somehow getting through the police barriers.

The vehicle drove into the water, then turned back with steam coming out from under the hood.

With files from CBC's Trevor Dunn and Shannon Martin