'This is a moment for Toronto': Crowds squeeze into city to witness Raptors victory parade

Despite delays, hordes of people squeezed into Toronto on Monday, waiting patiently to catch a glimpse of the Raptors victory parade motorcade that slowly crawled through the city's downtown core.

Ahmad Bokhari and his friends arrived to downtown Toronto's University Avenue around 10 a.m., secured a good spot along the street ahead of the Raptors victory parade, went to get some food an hour later, and then waited.

And waited. And waited some more.

Finally, despite all the delays, hours after they were scheduled to make their way through the downtown streets, the red double-decker buses carrying the NBA champions passed their way — and all that waiting and complaining became a distant memory.

"The excitement took over at that point," Bokhari said. "It was really exciting. We were anticipating this for so long and then finally to see it happen, finally seeing all the players come out, and the trophy itself, it was a real surreal feeling. It still hasn't kicked in yet."

Bokhari was one of more than an estimated one million people who squeezed into the city, many standing shoulder to shoulder, all to catch a glimpse of the parade motorcade that slowly crawled through Toronto's downtown core.

Plans for the massive celebration were announced last week after the Toronto Raptors defeated the Golden State Warriors in Game 6 of the NBA playoffs to claim the championship for the first time in the team's 24-year history.

"The people here are great. Everyone was happy to be next to everyone. This is the greatest moment in Canada right now," said Etobicoke resident Sam Tabit, who stood along University Avenue since 6:30 a.m., waiting to see the convoy pass.

Like Bohari, he said the wait, and the large crowds, was all worth it.

Nathan Phillips Square — the final destination of the parade route and the scene of a late-afternoon rally that started about three hours late — was so packed by midday that officials urged people not to come down.

Although the rally continued, the shooting left four people wounded and three people were taken into custody.

The parade itself was not without organizational problems. Osgoode subway station, the main stop for Nathan Phillips Square, was at capacity and closed around midday because of overcrowding.

With no barricades to keep people off the main parade route, crowds clogged the streets, causing huge delays as the motorcade inched its way along.

People were forced to stand in the crowded streets for hours, under, at times, a blaring sun. District Chief Stephan Powell of the Toronto Fire Service said firefighters dealt with about a dozen calls for dehydration in the square.

There were at least two reports of children temporarily separated from their parents.

Meanwhile, some fans took dangerous steps to get a view, climbing up the arches at Nathan Phillips Square, where an estimated 100,000 people had gathered, according to the estimates of city officials, while others got restless and brought down the barricades there.

Still, earlier in the day, the parade was enjoyed by hordes of fans, who viewed it as a must-see event — something that needed to be attended to in person and not just watched on television.

"This is a moment for Toronto," said Sunny Aujla, 27, from Brampton, Ont.

Richard Simpson, 27, from Bradford, Ont., said he had to come to this Raptors celebration simply because "there's never going to be another first championship parade. So it's something you have to experience.

"It's not something you can miss out on."

Some offices shut down to allow their workers to attend the event. But many, like Matt Waskey, took the day off to ensure they could celebrate the historic celebration.

"My boss said, 'I'm glad you had the day off, because I know you wouldn't be here anyway,'" he said.

"I told them I can't [work]," said Lequan Maxwell. "This is too big of a moment to miss out. I've never seen the city like this in my life. It's crazy. It's unbelievable. The city has been waiting for this for a very, very long time."

Maxwell, 25, had purchased a vintage Blue Jays World Series championship T-Shirt to wear in order to mark the occasion.

Indeed, the last time Toronto experienced such a celebration was 1993, when the Blue Jays won a second, back-to-back World Series title. That was this reason that Rowan Cunningham brought his son, Logan, to the parade.

"I remember doing it in 1992 and '93 with the Blue Jays; my parents bringing me down around the same age. So I thought, you know, can't miss it," he said. "It  was cool back then and it's cool right now." 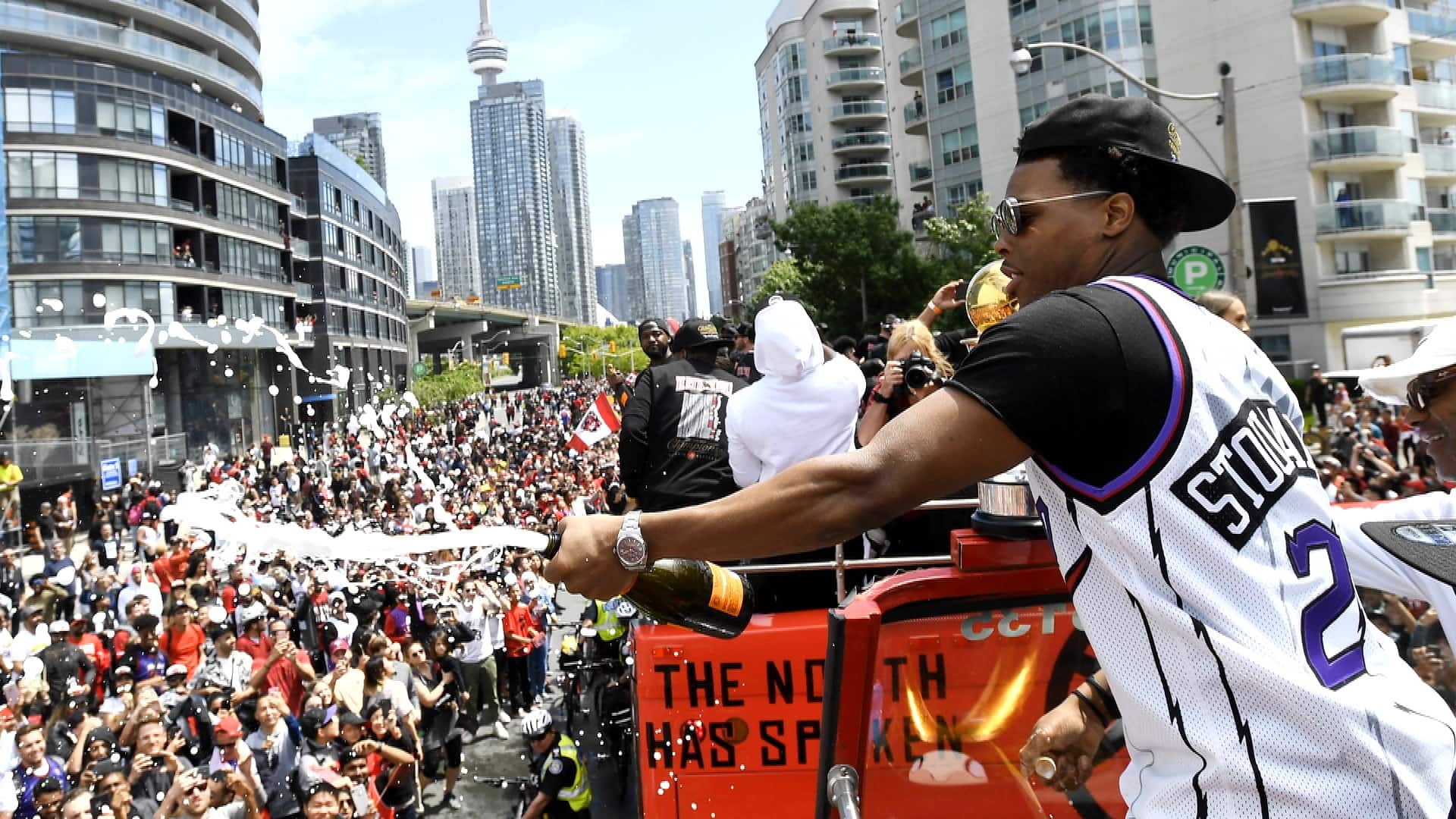 But not all were satisfied with the oversized celebration.

Carley Lynn Tanfield and her mother, Linda, arrived at Nathan Phillips Square around 11 a.m., and were still able to get very close to the stage, despite the fact some had camped out overnight. But then the crowds got too rowdy, Tanfield said, and some broke down a barricade.

The pair decided to instead move to University Avenue, and waited hours to watch the parade from there.

"I don't know if it was worth it," she said. "I kinda wish I stayed at home and watched the awesome view on TV."