The marquee event of Toronto's Pride weekend took over downtown streets Sunday afternoon. Prime Minister Justin Trudeau and Mayor John Tory were among those heading up the parade, followed by more than 200 participating groups. 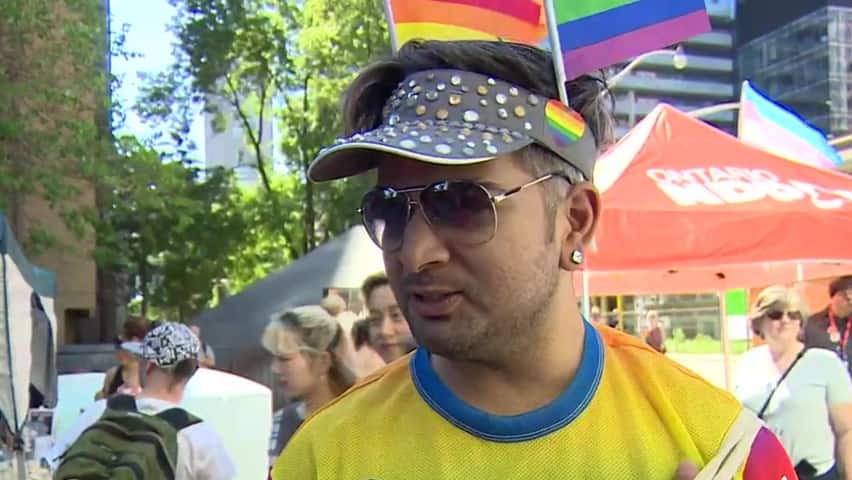 2 years ago
0:44
People in Toronto marched in one of North America’s largest pride parades Sunday 0:44

The atmosphere was "totally electric," said Jackie Steele, who attended the parade in Toronto for the first time.

Prime Minister Justin Trudeau, who marched with some of his cabinet ministers and Toronto Mayor John Tory, extolled the importance of celebrating Pride. They were followed by more than 200 participating groups.

"We are celebrating 50 years of this amazing, world-changing movement ... all around the world," said Toronto Pride co-chair Akio Maroon.

This year's Pride marked the 50th anniversary of the Stonewall Riots in New York City, which have long been credited for birthing the modern gay rights movement. The riots were spurred by a series of police raids on LGBT-friendly establishments.

Watch as Trudeau marches with the crowd: 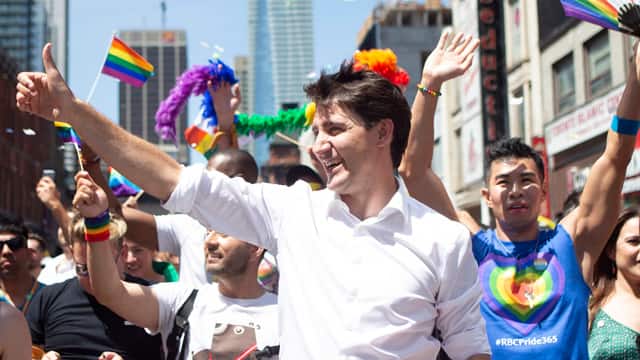 Toronto's 39th annual parade took place under a blanket of extra security following a physical altercation involving protesters at a Pride event in nearby Hamilton last weekend and the "general rise of fascism," said Maroon.

But the festivities remained peaceful.

Toronto's parade is among the biggest Pride events in North America.

Pride "showcases what humanity should be," said Steele.  "The openness the tolerance, the acceptance, the love."

Speaking at the parade, Trudeau said it's important for young people who are worried about coming out to see "politicians of all different stripes" marching to support them and the broader community.

This was the second parade in one week for Toronto, which celebrated the Raptors' NBA win with a massive event on Monday.

Among the celebrities in the Pride parade was Brooke Lynn Hytes, the first Canadian drag queen to make it on the hit TV series RuPaul's Drag Race. Canadian singer Carly Rae Jepson also performed for the crowd.

Other dignitaries who joined the celebrations included NDP Leader Jagmeet Singh. Ontario Premier Doug Ford, however, said he would not participate in the parade until uniformed police officers are permitted to march.

LGBTQ non-profit The 519 also handed out safety kits in case people engaged with protesters, said Maroon, which included whistles and signs with messages of love.

The board of directors for Pride Hamilton said the protest was led by "religious leaders from the United States and Canada," who intentionally came to "hatefully" disrupt the event. Investigators suggested individuals with the yellow vest movement may have also been involved.

While protests are nothing new, Nuamah said political rhetoric "has become much more heated" in recent years and given a space for some to spout anti-LGBT views. Detroit's Pride parade earlier this month was marred by protesters wearing swastikas.

The protests, Nuamah noted, show how important an event like Pride remains.

"This is exactly why Pride is a protest and not a celebration. And until these incidents stop it will continue to be a protest and celebrating will be second to that."

The theme of this year's Pride is "freedom," said Maroon, marking the 50th anniversary of Stonewall.

The messages of the Stonewall Riots are still salient for the LGTBQ community today, activists said.

The arrest of serial killer Bruce McArthur, who ultimately pleaded guilty to killing eight men, most of whom had ties to Toronto's Gay Village, hung over last year's Pride events.

Nuamah told CBC Toronto a couple of weeks ago that the years it took to arrest and charge McArthur were proof that the message of the Stonewall Riots still matters.

Once again, uniformed police did not march in the parade. Officers were still allowed to march in civilian clothing.

At the parade on Sunday, Mayor John Tory said he's trying to help "bridge [the] gap" between Pride and police, and restore trust.

Tory said he's "going to work very hard" to make sure there's a police presence back in the parade, "ideally next year."

"It is a parade that's supposed to be about everybody being here," said Tory. "If the police are excluded, then it's not everybody."

Nuamah said Pride Toronto isn't shunning LGBT officers or forcing them to turn away from their identity. She said the issue is with policing as a whole. "Policing as an institution, as a practice, has been problematic to this community and that needs to change."