Dozens of front-line Toronto police officers will soon be equipped with semi-automatic assault rifles similar to those carried by Canadian Forces soldiers and specialized tactical units, CBC News has learned. 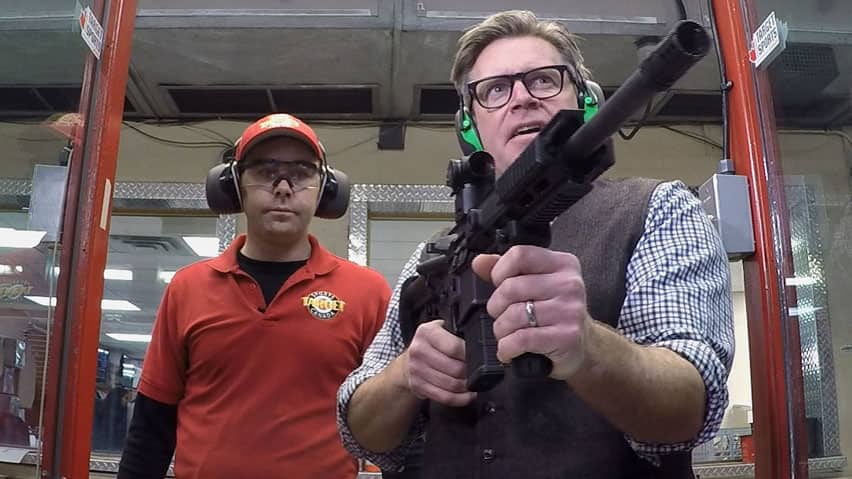 Dozens of front-line Toronto police officers will soon be equipped with semi-automatic assault rifles similar to those carried by Canadian Forces soldiers and specialized tactical units, CBC News has learned.

The Toronto Police service is set to buy at least 50 C8 carbine assault rifles from Colt Canada, which is based in Kitchener, Ont. The rifles, which cost $2,000 each, will be carried in patrol cars in all of the city's 17 divisions beginning in May.

"We're always looking at technology to see if it offers us additional safety, additional accuracy, something that can help us protect the public," said police spokesperson Mark Pugash.

Toronto Emergency Task Force officers, Pugash said, have been using the weapons for the past 16 years.

The C8 rifle is "battle proven" and has been developed in conjunction with the Canadian Forces, Colt Canada says on its website.

Alex Payne, a spokesman for Colt Canada, told CBC News the C8 Carbine is a "fully- or semi-automatic assault weapon" and that "98 per cent" of their law enforcement customers purchase the semi-automatic version.

The Toronto Police Service is the last GTA police force to supply its front-line officers with C8 rifles. Colt Canada said police forces all across the country have been buying the weapons, as well.

John Weiler, an instructor at the Ontario Police College in Aylmer, Ont., says the weapons are a safer alternative in situations with active shooters or barricaded subjects.

Weiler added the guns can also be used as part of a de-escalation strategy.

The rifles are considered to be more accurate and effective at distance than the .40-calibre semi-automatic pistols and 12-gauge shotguns currently used by Toronto officers.

Each rifle weighs about three kilograms and will have a magazine holding 30 rounds. They can fire bullets at about 900 metres per second and are considered accurate at distances of up to 400-500 metres.

Ry Callaghan, a range officer at Target Sports in Gormley, Ont., where many GTA police officers practice shooting, said the firearm has many benefits. The rifles are "very easy to use" and "very easy to be trained on and become proficient with."

The C8s also have little recoil meaning almost anyone can fire them without difficulty.

They're so easy to use that an untrained CBC reporter was able to hit a bullseye at the range, something he couldn't do with the standard pistol and shotgun.

The police community has been pushing to equip front-line police officers with more powerful weapons like the C8 rifle in the wake of two shooting rampages that left officers dead. In 2005, four RCMP officers were killed in Mayerthorpe, Alta., and in 2014, a gunman targeting police in Moncton, N.B., left three RCMP officers dead.

Pistols and shotguns are antiquated weapons that are no match for an assault rifle.- Darryl T. Davies, Carleton University

"In the 21st century police are increasingly facing the threat of confrontation with criminals and terrorists who are equipped with high powered assault rifles," he told CBC News.

"Pistols and shotguns are antiquated weapons that are no match for an assault rifle."

Davies said the C8 carbines are much more accurate and have better range than the weapons officers currently carry.

However, Davies said officers should obtain training and certification "before being allowed access to a carbine."

For now, Toronto police will continue to arm all of its front-line officers with pistols, Pugash said, but officers will also receive full training with the C8 carbine.

Pugash said at the same time as police are getting more powerful weapons, they're also getting less-lethal options.

So-called sock bullets, which are essentially bean bags, will be available as ammunition for police shotguns, Pugash said.

Elsewhere in the GTA, the C8s that are in service haven't been used to deal with an active shooter.

Peel Regional Police told CBC News, so far officers have fired the weapons "to humanely dispatch a badly injured animal that could otherwise not be saved."

Both Peel and York police services began training and equipping front-line officers with C8s in 2014. Police in Durham region, meanwhile, began training with the weapons in 2012.

Toronto officers are expected to get the weapons in May. At least three patrols cars in each of the city's 17 divisions will have one of the rifles.

The Department of National Defence, meanwhile, has a program to equip law enforcement agencies with surplus military equipment. DND officials say since March 2015 it has received requests from 63 separate organizations for C8 Carbines, including from the Durham Region Police Service.