Toronto police are looking for a man who shouted an infamous misogynistic slogan at a CBC reporter after the Pan Am Games closing ceremony. 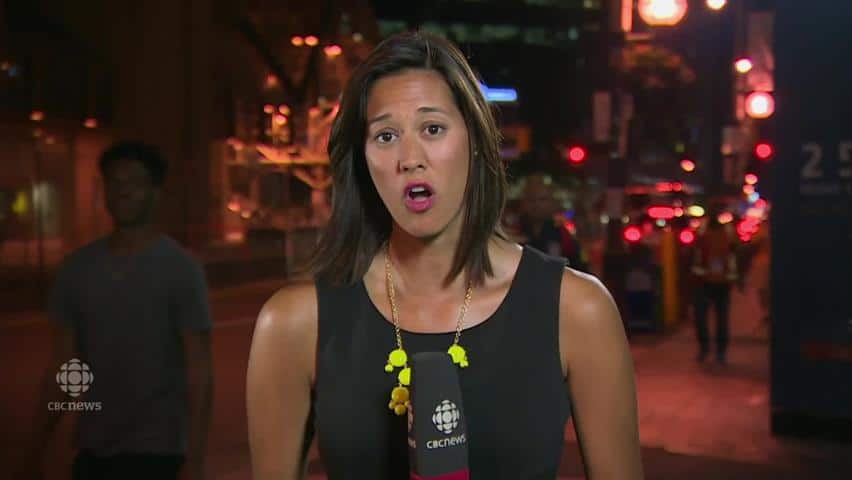 Toronto police are looking for a man who shouted an infamous misogynistic slogan at a CBC reporter Sunday after the Pan Am Games closing ceremony.

As Charlsie Agro was finishing her on-air reporting of the ceremony outside of the CBC atrium, two men and a woman walked behind her and one of the men yelled out the phrase with the acronym FHRITP.

Agro confronted the group after her report ended.

"In that exact moment, I was talking about how proud I am of our female athletes," she said. "This was not the way I wanted people to go away thinking about the Pan Am Games and our CBC coverage."

In addition, Agro said, it was just about an hour after the closing ceremony ended, and there were still many families and children in the area.

"I finished what I had to do on-air and then took out my iPhone and took video of them."

The man who said the offending words ran away.

Another man danced behind her at the time the slur was shouted, but he was not affiliated and did not shout out.

The misogynistic slogan, taken from an internet meme that started in early 2014, is shouted almost exclusively at female reporters during live televised segments with the intent to embarrass the reporter. It includes vulgar language concerning women.

In May, the slogan was used when a Toronto reporter was doing a live segment at a soccer game. It was caught on camera, some of the men were identified, and one man was dismissed from his job as a result of his behaviour.

"Collectively, as reporters and media professionals, I think we need to say we are not OK with this," Agro said.

Const. Scott Mills said the exposure on Twitter has led to several tips, but said the investigation is still in its early stages.

Mills said investigators will have to determine what, if any, criminal charges would apply. Such incidents could theoretically be treated as mischief offences under the Criminal Code, but some jurisdictions choose to pursue charges through civil legislation or municipal bylaws. Others may opt not to take any action at all.

"It's safe to say that we're on it, we care, and we're trying to figure out how we're going to go about this," Mills said.

Lawyers have previously said that such heckling incidents generally fall outside the purview of workplace sexual harassment laws, since they involve third parties who are not directly connected to the women's employers.

Agro said the explicit remarks, however, are threatening no matter where they're made and should not be dismissed as a mere prank.

"If this happened to a woman who was sitting at her desk at a workplace and someone said it, I don't think anyone would question it as being inappropriate or wrong."