Toronto police are launching a full investigation after a handcuffed man was able to pull out a handgun while riding in the back seat of a cruiser — an incident that was caught on camera. 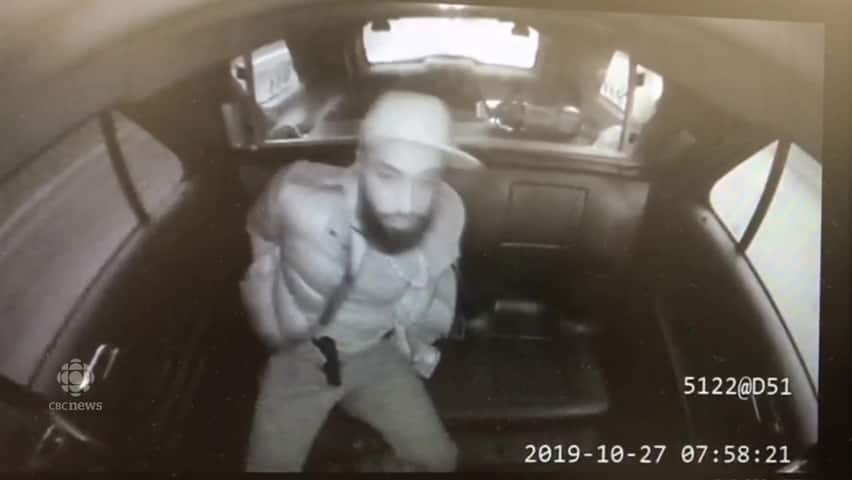 Watch handcuffed man in back of cruiser pulls gun

1 year ago
1:12
Toronto police are investigation after a man, Mississauga's Ali Showbeg, was able to pull a gun out of his clothing after being arrested for alleged impaired driving. 1:12

Toronto police are launching a full investigation after a handcuffed man was able to pull out a handgun while riding in the back seat of a cruiser — an incident that was caught on camera.

Toronto police said Tuesday the incident took place last Sunday in The Esplanade area of the downtown core, when a man was arrested on suspicion of driving while impaired near the strip of bars and restaurants.

CBC Toronto has obtained video of the incident, which was captured by the cruiser's on-board camera. In the video, the accused can be seen pulling out the weapon before sliding it down his legs.

Police said in a release that a "pat down" search was conducted, and the 38-year-old man was handcuffed, but as officers drove the man to a nearby police station they heard something hit the floor in the back seat.

When officers opened the back door they found a semi-automatic pistol in front of the man, police said.

"The officers conducted a search of the accused and the gun was not detected," said Toronto Police Chief Mark Saunders in a statement.

"The incident is under investigation to assess if this is a training or disciplinary matter."

Ali Showbeg, age 38, of Mississauga, is facing nine criminal charges, most of which are firearms-related.

Showbeg is under a lifetime weapons prohibition order after he was sentenced in November 2006 to three years for possession of a loaded firearm in connection to a 2005 shooting outside a Toronto No Frills, according to court records.

Attempted murder charges were dropped in the incident.

Handguns 'the reality' of policing in Toronto

It's unclear how the man hid the weapon from the officers, but police said they sent a safety notice to other officers warning them about what happened in this case.

"I think it's a very frightening, scary video," said Mike McCormack, president of the Toronto Police Association. "I think it's a wake-up call to our membership and the public."

McCormack went on to explain that police officers are sometimes unable to perform the type of full body search that might reveal hidden weapons. He suspected the officer in this case was only able to perform a pat-down-style search.

"That's the reality of what we're facing in policing," McCormack told CBC Toronto.

He said the incident demonstrates the larger concern around "the prolific amount of people out there carrying firearms."

Toronto officials have voiced concerns around the flow of illegal handguns into the city and increasing violence.

According to police statistics, Toronto is on pace to set a new record for shootings this year.

On Tuesday, Mayor John Tory called the incident "disconcerting" and said the situation could have put front-line officers and the public in harms way.

"It certainly would have placed the officers at risk," Tory said.

Tory, who sits on the city's police services board, said the force will now have to sort out what happened.