Police in Toronto are lifting the curtain on an extremism prevention program that has been quietly operating in the city for more than two years — but experts in the field say getting young people at risk of radicalization to use it will come down to a question of trust.

Success of program will depend on whether young people feel they can trust it, say experts

Police in Toronto are lifting the curtain on an extremism prevention program that has been quietly operating in the city for more than two years — but experts in the field say getting young people at risk of radicalization to use it will come down to a question of trust.

The project, which grew out of an existing gang-prevention program in Rexdale in northwest Toronto, has been purposely kept from public view until this week. The program started taking extremism cases in 2013.

"At this point in time we feel that we have a good service in place and we're ready for people to participate in it," Deputy Chief James Ramer told CBC News. Together with the City of Toronto, Ramer said, the force hoped to fine-tune the program behind the scenes through direct involvement from community groups, rather than simply present a made-by-police project.

Here's how it works.

A person deemed at risk for extremism is referred by a police officer or a participating agency to one of four hubs, each consisting of 15 to 20 bodies, including medical professionals, faith groups, the school board and community housing.

Referrals require the consent of the person at risk and are based on a list of some 103 risk factors. Participation, said police, is entirely voluntary.

Cases are assessed at the hub, and depending on the most pressing concerns, two participating organizations are chosen to lead an intervention, which can range from spiritual counselling to mental health assistance.

"All of this is done in complete anonymity," said Ramer, adding that the hub process meets the privacy commissioner's "gold standard" in terms of protection of personal information. Only cases that involve a criminal element or pose risks to public safety are formally investigated.

As for what kinds of extremism the program addresses, Sgt. Kelly Gallant said it runs the gamut from Islamist-inspired, to white supremacist to environmental extremism, to name a few. "We talk about all different kinds of extremism … not just what we mostly see on TV." 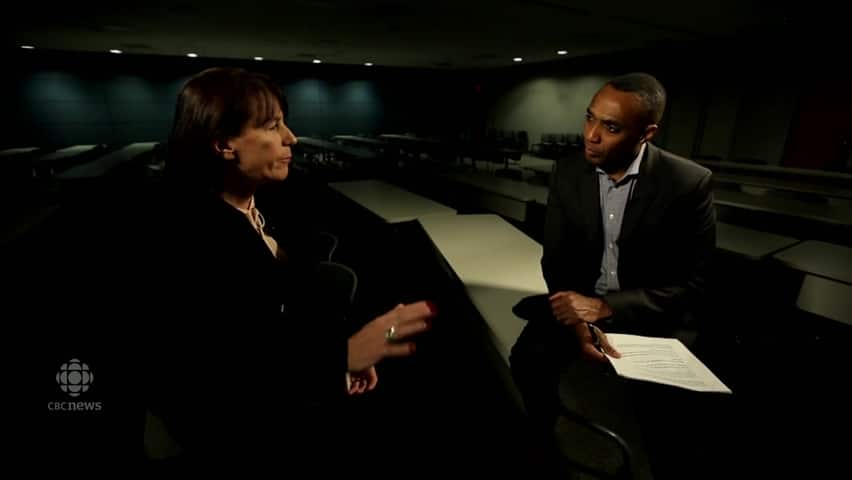 4 years ago
1:18
Toronto police talk about people vulnerable to deradicalization 1:18

It's not the first time a deradicalization program has been floated in Toronto, but it is the city's first police-led initiative.

Six months ago, the Canadian Council of Imams announced plans to open two to three deradicalization clinics in Toronto that would take a "holistic" approach, as early as this fall. Those clinics, Toronto imam Hamid Slimi told CBC Toronto, have not yet taken off owing to a lack of community support.

In Alberta, Calgary police have since September 2015 led a program called ReDirect, in which an officer is paired with a social worker or psychologist and assigned to an individual deemed at risk.

The Calgary model functions as a stand-alone program to address radicalization specifically, something Toronto police say could create a stigma their program avoids.

Toronto's program is housed under the police's existing community safety program, which also tackles gangs and drugs. Montreal also has an anti-radicalization centre, but not one led by police.

Trust 'in shambles' in some communities

But whether young people will consent to being involved in the program will ultimately depend on whether they feel safe engaging with police, says University of Waterloo religious studies post-doctoral fellow Amarnath Amarasingam.

What records will be kept? How are they going to be kept? For how long? What use can be made of them?- Jessyca Greenwood

"It depends much on how the police are able to gain the trust of communities. In some communities, this trust is in shambles, but in others, there is a history of working together. So, it really depends if the cops can shed some of this baggage," Amarasingam said.

Police would not say how many extremism cases have come through the program so far. Gallant said they haven't seen many.

But Toronto criminal defence lawyer Mohamed El Rashidy questions whether police should be involved in such a program at all.

El Rashidy points to more than half a dozen cases he has dealt with, in which he said young people have been felt pressured or coerced through interactions with federal police to play a surveillance role in their communities.\

"The recruitment of informants is extremely common, it's very well-known. I'm seeing that at the CSIS and RCMP level and I don't want to see Toronto police involved in that."

Toronto police say they are also training school boards to recognize youth at risk so that referrals can be made through teachers and officials as an alternative for those who don't feel comfortable going through police.

"This becomes a very slippery slope," criminal lawyer Jessyca Greenwood said. "You can engage people's prejudices and potentially there's room for racism to rear its ugly head.… Getting teachers and people who don't really know about the law involved, isn't a great idea."

Prevention the goal, not prosecution

Greenwood adds that to recommend the program to any client, she would want explicit assurances that participants will not be made to feel coerced or become incriminated, understand their full rights and realize they are not required to speak with police.

She would also want in writing that any information collected through the program would be "non-jeopardy," meaning it could not be used against a person if they were later charged with a crime.

"What records will be kept? How are they going to be kept? For how long? What use can be made of them? And will they be shared with other agencies?" she asked.

But Sgt. Gallant insists the program is focused solely on prevention, not prosecution.

"We will not keep a record, we won't be keeping any databases. We're just going to be referring an individual for support and if it came in through a police channel, we'll just close the file that's been referred."

Imam who helped deradicalize Toronto man not contacted to participate

The success of Toronto's program hinges not only on the trust of prospective participants, but also on close collaboration with communities, Canadian Council of Imams vice-chair Yusuf Badat said.

"We didn't want it to be under the control of the police," Badat said. "The idea is to be in a neutral space, to be independent from different influences."

In fact, it was Badat who — at the suggestion of the RCMP — provided religious counselling to a young Toronto man who, according to an agreed statement of facts, earlier this week managed to have a federal application for a preventative peace bond against him dropped. CBC Toronto has not named the man as he was not formally charged with any criminal offence.

For the Toronto imam, the case is proof of the importance of partnering with leaders who understand particular communities' needs.

But while Gallant and Ramer say they have spoken with the CCI about their shared aims, the two are not presently working together on the Toronto program.

"I personally have not been contacted," Badat said.

For her part, Greenwood said she would support the program if police can ensure young people participating in it won't be unfairly labelled.

"But at the end of the day the justice system is set up to be an adversarial process, and I find that in many cases it's hard to move away from that."

And ultimately, said El Rashidy, the fact that the public wasn't made aware of the program for more than two years leaves him skeptical:

"They say, 'We didn't make this public' and yet at the same time they say, 'We want people to know that we're there to help.' Reconcile that for me."