A Toronto family has demanded a public apology after two police officers were caught on dashcam footage mocking a woman with Down syndrome during a traffic stop, describing her as disfigured and less than a whole person.

A Toronto family has demanded a public apology after two police officers were caught on dashcam footage mocking a woman with Down syndrome during a traffic stop, describing her as disfigured and something less than a whole person.

"I feel hurt; it really hurt my feelings. I was disgusted by what they said about me," said Francie Munoz, 29.

In December 2016, two Toronto police officers pulled over Pamela Munoz, who had her two daughters with her in the car, for allegedly running a red light. 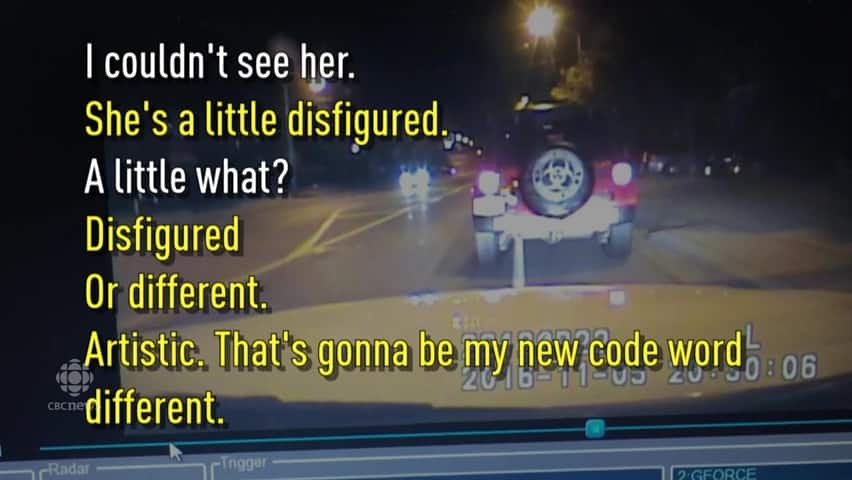 Pamela Munoz said she believed the light was amber when she drove through an intersection. The officer who issued the ticket told her the incident was recorded on video and that she could fight the ticket in court.

When Munoz received the tape as part of the disclosure prior to her court date in June, it was marked as having no audio. But she soon heard the officers on the video mocking her daughter Francie, who had been sitting in the back seat.

One officer can be heard saying there are "two-and-a-half women" in the car instead of three and then goes on to describe Francie as "disfigured …or different," with the other officer laughing and agreeing.

"Artistic.…That's going to be my new code word for ... different," says the officer.

Pamela Munoz says she believes the officers were unaware their comments were being recorded.

One of the officers can also be heard joking about the women, who had a pizza with them in the car, saying, "They're [probably] nibbling on it right as we speak."

Pamela says that at first she was simply upset about her demerit points, but listening to the tape changed everything.

"Obviously I was extremely upset. My blood was boiling. I'm still very upset, but at that moment I was enraged," she said. "These are the people we've told Francie to trust, to go to when she needs help."

She and Francie asked the police officers to publicly apologize and go through training to make sure this doesn't happen again.

"I can't believe two officers would conduct themselves in this manner … that they'd be this inhumane in their comments," said Pamela. "They don't respect, obviously, people with disabilities or people that are different than them."

The president of the Toronto Police Association said he has spoken with the officers involved, who say the comments are out of character for them and not something they are known for in 22 Division.

"They say their comments were totally inappropriate and [they] will do everything they need to do, including an apology and sensitivity training … to make it right," said Mike McCormack.

The Munoz family say it means a lot to them that Chief Mark Saunders, as well as Mayor John Tory, have both reached out to them.

Francie would like to see police officers receive better training for dealing with people with disabilities, something she advocates for herself through the Centre for Addiction and Mental Health (CAMH).

She appears in several campaign videos for CAMH, helping to educate people on what it's like living with Down syndrome.

"It's a teachable moment. Here is something we can all learn from … how it feels for a person to be spoken about in a certain way," said Yona Lunsky, a clinician-scientist at CAMH. "When we're thinking about diversity, we think about certain types of diversity. Disability is another kind of diversity that we all need to be better sensitized to."

With files from Shannon Martin