Toronto councillors have decided not to proceed with a contentious ban on single-use plastic bags that was due to take effect on Jan. 1. 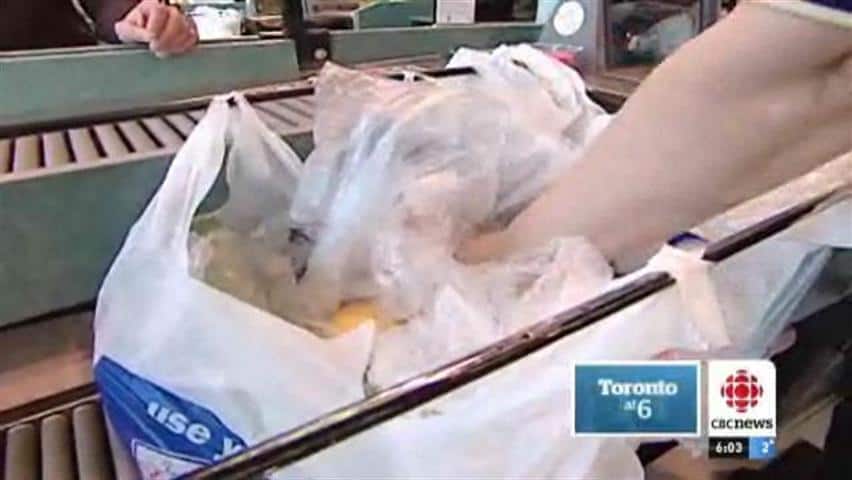 8 years ago
2:36
Toronto city councillors have decided not to proceed with a contentious ban. 2:36

Toronto councillors have decided not to proceed with a contentious ban on single-use plastic bags that was due to take effect on Jan. 1.

City councillors received confidential legal advice from a solicitor before voting 38-7 Wednesday not to proceed with the ban, the CBC's Jamie Strashin reported.

Council is due to revisit the issue in June.

It appeared that some members of council are hoping that the bag ban can be revived.

But she said the political discussion on the matter helped shift opinion over time.

Inside council chambers, Coun. Gord Perks said "we find ourselves in a position where plastic bags are going to be used unregulated in the city of Toronto."

The city had been hit with a pair of legal challenges over the proposed bag ban in recent weeks, one from the Ontario Convenience Stores Association and the other from the Canadian Plastic Bag Association.

Toronto previously had a mandatory five-cent fee that retailers were required to charge customers for each plastic bag they were given.

But when an attempt was made in June to get rid of the so-called bag tax, councillors ended up voting in favour of placing a full ban on giving single-use plastic bags to consumers.

Ford was among the members of council who predicted that the proposed bag ban would spark legal problems.

Torontonians are estimated to use 215 million plastic bags each year, which amounts to some 1,400 tonnes of plastic.

With a report from the CBC's Jeff Semple