For thousands of Syrian refugees arriving in Canada, a newly reopened terminal at Toronto's Pearson International Airport will be one of the first things they see when they enter this country 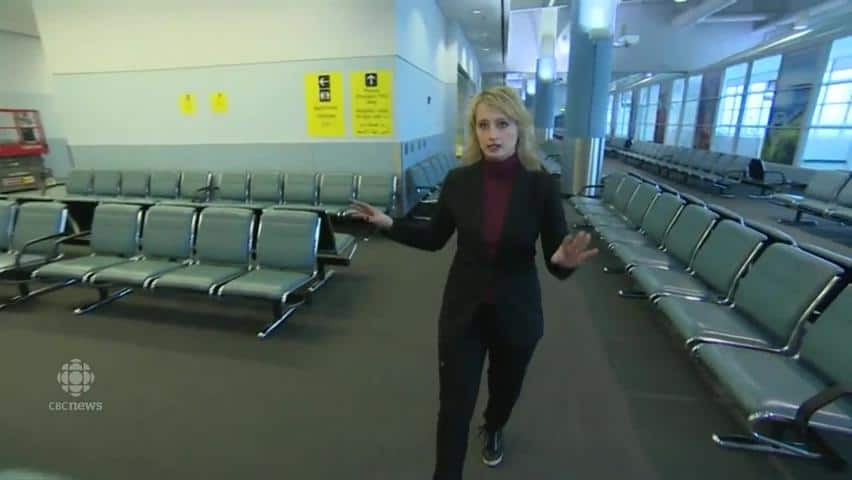 5 years ago
1:23
CBC Toronto's Natalie Kalata gives us a tour of the newly unveiled terminal for Syrian refugees at Pearson Airport. 1:23

For thousands of Syrian refugees arriving in Canada, a newly reopened terminal at Toronto's Pearson International Airport will be one of the first things they see when they enter this country.

The Greater Toronto Airport Authority showed off on Tuesday its revamped Infield terminal alongside officials from the Canadian Border Services Agency (CBSA). The building, separated from the airport's main terminals, has been specially redesigned ahead of the arrival of thousands of government-sponsored refugees.

Syrian Refugees will arrive at this gate <a href="https://t.co/waXBx5VN1U">pic.twitter.com/waXBx5VN1U</a>

CBSA officials consider the terminal a temporary port of entry and said a similar one has been set up at Montreal's Pierre Elliott Trudeau International Airport.

The goal, the organization said, is to move the refugees through the airport within three to four hours so they can begin the "important work" of resettling into Canadian communities.

"With our many partners, we have worked to make new arrivals as comfortable as possible, while protecting the integrity of the arrival process," said the CBSA's Regional Director General Goran Vragovic in a news release.

The facility includes a processing area where Syrians will fill out paper work in cubicles. It also has a children's play area and signs in English, French and Arabic — though the Arabic portion of the sign is being redone because of some issues with the text. Water and food will be provided, the agency said.

Some 30 Canadian Border Services Agency workers will be on hand to help process the refugees. Once the refugees leave the airport, they will be permanent residents.

There will be representatives from Service Canada, Immigration Canada, Public Health and the Canadian Food Inspection Agency on hand to help with various aspects of the arrivals.

Most of the work, the CBSA said, will be confirming refugees' documentation, as all of the people arriving in Canada will have been screened by Canadian and UN officials abroad.

Video of Processing centre at airport . CBSA estimates it will take about 30 minutes per family to process <a href="https://t.co/cH26dQZ3cl">pic.twitter.com/cH26dQZ3cl</a>

The federal government plans on bringing 25,000 Syrian refugees to Canada by the end of February, with 10,000 of them arriving in Toronto and Montreal by the end of this month.

Many refugees arriving from Turkey and Lebanon will also be landing in Toronto before continuing their journey to other parts of the country.

While Citizenship and Immigration Canada considers the influx of refugees "historic," it won't be out of the ordinary for Toronto's airport to handle thousands of passengers. More than 100,000 people per day pass through Pearson on some of the holiday season's busiest travel days.

The special terminal is expected to remain open until February.

With files from Natalie Kalata