Still standing within 2 metres of each other? That could cost you $5K under new bylaw, Tory says

Busy parks are a growing problem, Mayor John Tory says, and enforcement to reduce crowds is on the way. Tory announced a new bylaw Thursday that could mean a fine of up to $5,000 if you get closer than a metre to another person in city parks and public squares.

In Toronto's bid to stop the spread of COVID-19, city officials announced a new bylaw Thursday that prohibits people from standing within two metres of each other in some parts of the city — and failing to comply could mean a fine of up to $5,000.

Mayor John Tory, joined by Toronto's medical officer of health and fire chief, announced the change at their daily news conference on the city's response to the novel coronavirus pandemic.

The bylaw, which will remain in effect for at least the next 30 days, is limited to interactions in city parks and squares. That's where city officials say they are seeing the most problem with crowding. It's also limited to two or more people who don't live together.

"Lives are potentially at stake and we'll turn up the heat," Tory said.

"We will continue to do everything we can as a municipal government to lock down the city to save lives." 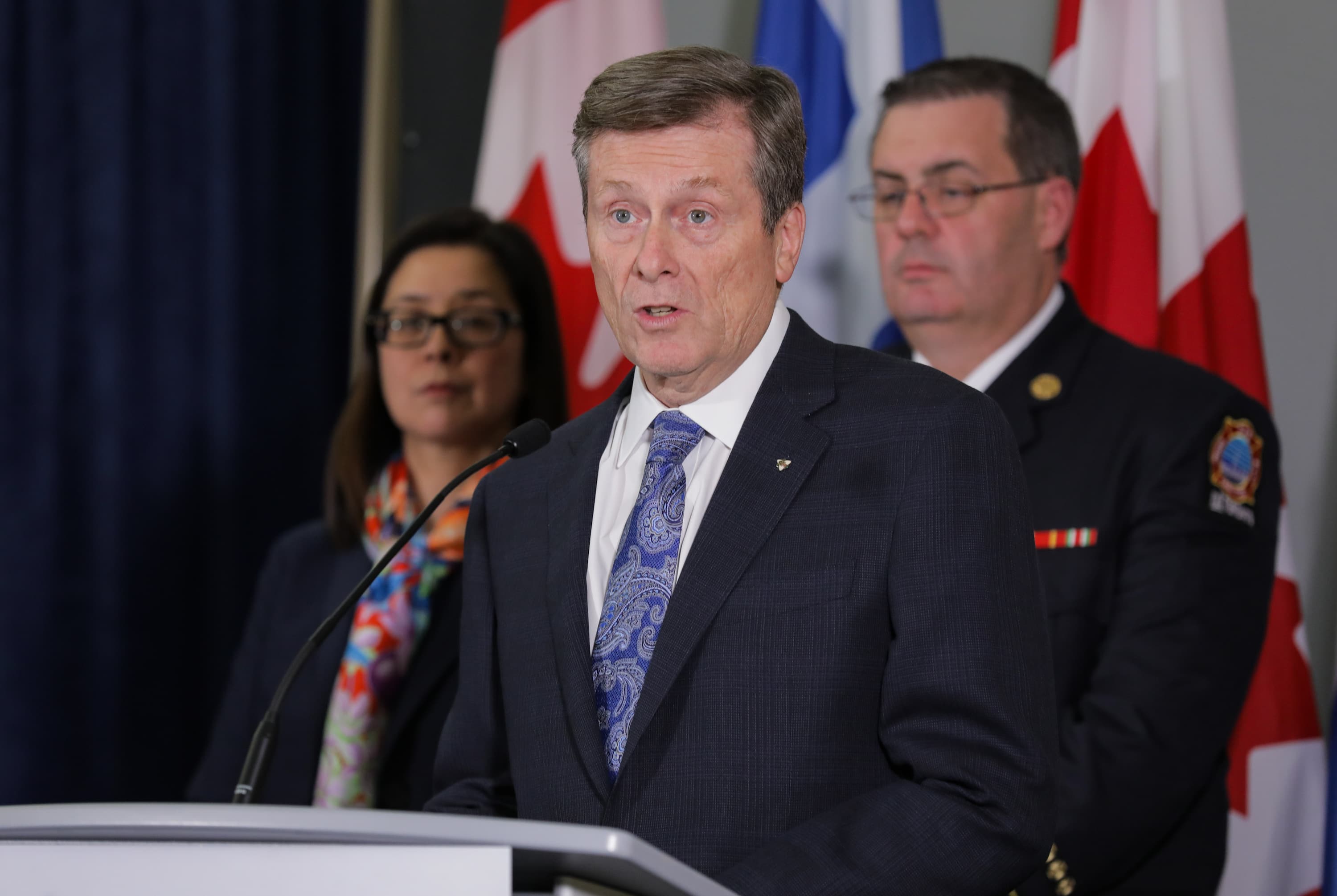 Despite the new bylaw, questions remain around where people should and shouldn't go in the city.

Can Torontonians go for a jog, walk the dog, or stroll through the park during the COVID-19 pandemic?

According to public health officials and elected leaders, the answer for now appears to be: it depends how many other people are doing the same thing.

The enhanced restrictions and recommendations released by Toronto Public Health on Wednesday advise people to limit their time outdoors to essential trips, but the guidelines still allow for walking pets or getting daily exercise so long as physical distancing of two metres is possible. 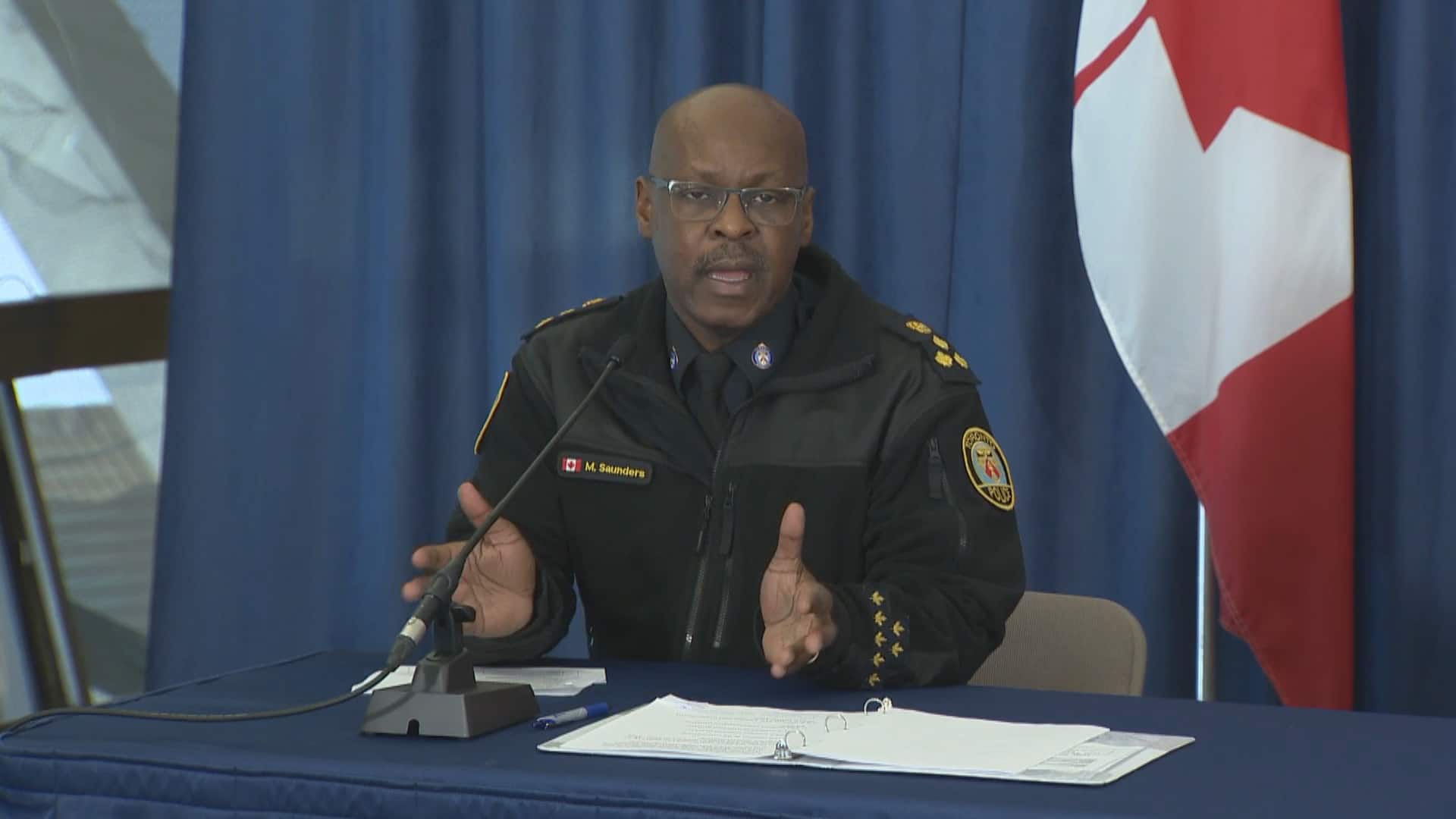 How Toronto officers will enforce the new two-metre distancing bylaw

11 months ago
1:51
Toronto Police Chief Mark Saunders was asked by reporters today how officers will enforce a new city bylaw that makes it illegal for people to be standing within two metres of each other. Saunders also addressed if officers would wear protective equipment. 1:51

Toronto's Medical Officer of Health Dr. Eileen de Villa described those non-essential outings as "reasonable things to do while trying to stay home as much as possible."

But Tory pointed to crowded parks, singling out Sunnyside Park on the lakefront, to suggest that some residents are not taking the rules seriously enough.

"It's not saying you can't go outside, it's just saying that in places where people congregate, they can't do that right now," Tory said on Metro Morning.

Amenities are closed, but parks are not

While the city has closed a variety of outdoor amenities such as washrooms, off-leash dog areas, sports fields and picnic areas, other green spaces within parks and ravines are still open to the public.

When asked by a CBC Radio listener unsure about what to do when those spaces are crowded, Tory suggested residents look for quieter areas off the beaten path.

"They can take their car to a side street," he suggested. "I have not heard a lot of complaints about people saying side streets are crowded."

He suggested the city would start using the large concrete barricades to keep drivers out. He said they will be the same barriers the city previously used to block access to unlicensed cannabis stores last summer.

"We have to respond accordingly," Tory said.

De Villa has said she's continuing to encourage residents to practice physical distancing, though both she and Tory have increasingly reminded residents about the grim situations unfolding in other parts of the world.

"Turn on your TV, have a look at what's going on in New York and decide together with us: we don't want to go there," Tory said.

TTC not implementing caps on passengers

The TTC, meanwhile, says it has not implemented caps on passengers per vehicle.

"While we agree 10 to 15 customers is a reasonable number, we would rather operators continue to focus on moving our customers safely than on counting heads," TTC spokesperson Stuart Green said in a statement.

The TTC is instead adding additional buses to the busiest routes so there's fewer customers per vehicle, Stuart said.

But that still doesn't explain boarded-up store fronts, which have been popping up around Eaton Centre's perimeter.

"We did not make any changes to store fronts. You would have to speak with the retailer about their store front," CF Toronto Eaton Centre said in a statement.