A man who was wounded in the deadly shooting that erupted at a Toronto barbecue this past summer has been charged with two counts of second-degree murder. 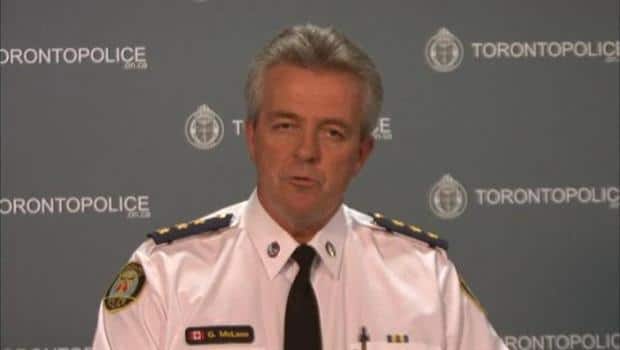 A man who was wounded in the deadly shooting that erupted at a Toronto barbecue in the summer has been charged with two counts of second-degree murder.

Nahom Tsegazab, 19, had been charged with reckless discharge of a firearm just days after the Danzig Street violence of July 16. Two people died in the shooting and 23 others were wounded, including Tsegazab.

Besides the murder counts, Toronto police reported Tsegazab has also been charged with one count of attempted murder and 22 counts of aggravated assault.

The additional charges Tsegazab is facing "relate to his actions, not the fact that he was a victim," Staff Insp. Greg McLane told reporters at police headquarters on Thursday afternoon.

McLane said investigators believe at least one other "shooter" was involved in the July 16 incident on Danzig Street.

Earlier this month, police announced that Shaquan "Bam Bam" Mesquito had been charged with two counts of first-degree murder and 23 counts of aggravated assault. Mesquito was also charged with the attempted murder of Tsegazab.

When police announced the charges against Mesquito on Nov. 8, they also released images of two persons of interest they were trying to identify.

During Thursday’s news conference, McLane said one of the two had been identified, while investigators have learned the street name of the second is "Juvi."

McLane said that public assistance is needed to help learn the legal name of this second person. "We also ask that this individual come forward and speak to our investigators," he said.

In September, police issued a detailed news release that outlined a description of the events they believe unfolded on July 16.

According to police, the barbecue started in the afternoon, but continued on into the evening hours. Police say members of the Galloway Boys street gang attended the party, as did people from outside the neighbourhood.

Some people attending the party from the Malvern area were told by Galloway Boys members to leave.Those individuals left, but returned with other people and another confrontation occurred, resulting in multiple people firing weapons, police said.

On Thursday, McLane was asked whether the dispute that sparked the violence was one that arose in the moment, or whether it was tied to a long-standing grudge between the two groups.

"It would be fair to say that, historically, individuals that identify themselves as associate to the Malvern Crew and those with the Galloway Boys would have had a long-time rivalry to some degree," McLane said.

"What I'm saying is that I believe that that evening there was a dispute, an event that occurred that caused the problems that later unfolded, to cause all these injuries to all these people."