Toronto man reunited with rescuers who pulled him from wreck

A Toronto man who spent hours trapped beneath a transport truck is reunited with the more than two dozen firefighters who helped save his life. 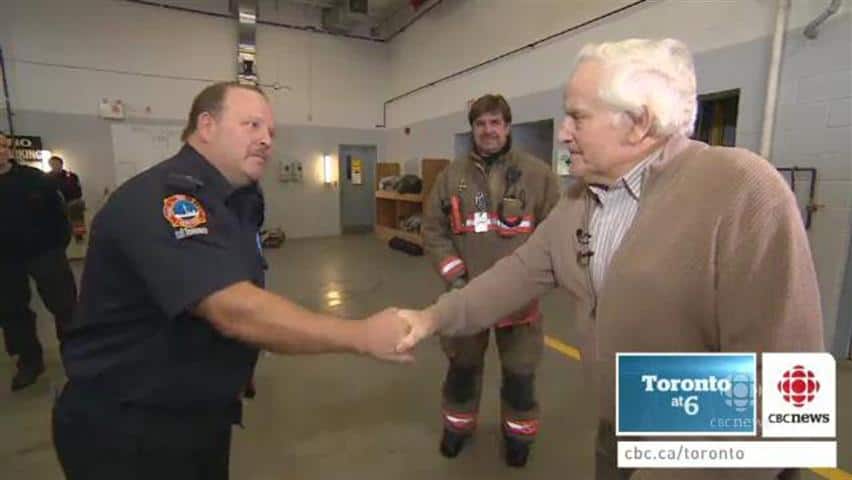 7 years ago
1:58
An elderly Toronto man thanks the firefighters who worked for three hours to free him from a terrible car wreck. 1:58

A Toronto man who spent hours trapped beneath a transport truck was reunited today with the more than two dozen firefighters who helped save his life.

Bruno Deotto, 80, wanted to thank the men who worked for three hours to free him from the tangled remains of his car after it was crushed by a truck near Steeles Avenue West and Fenmar Drive in November.

Deotto was pinned beneath the truck and a concrete barrier.

"It makes me cry all the time I think about it," he said Wednesday. "It was so fast — a blink of an eye."

It took two teams of firefighters from across the city, 28 in all, to get him out.

"On arrival we didn’t think he'd survive," said Capt. Michael Langford of Toronto Fire Services. "Then to realize he was alive — that was amazing."

The rescue was a delicate operation. One team worked to secure the heavy truck, while the other tried to pull Deotto free.

"If we started taking the car apart, the truck would have crushed everything," said Langford.

One fireman held Deotto’s hand through the entire ordeal. The two men shook hands when they were reunited on Wednesday though the fireman — bashful, like his colleagues — was too humble to give his name.

Once freed, Deotto was airlifted to hospital and, remarkably, had suffered only minor injuries.

With files from the CBC’s Priya Sankaran and Charlsie Agro