An Etobicoke resident has filed a complaint with the City of Toronto's integrity commissioner against Ward 6 Coun. Mark Grimes. 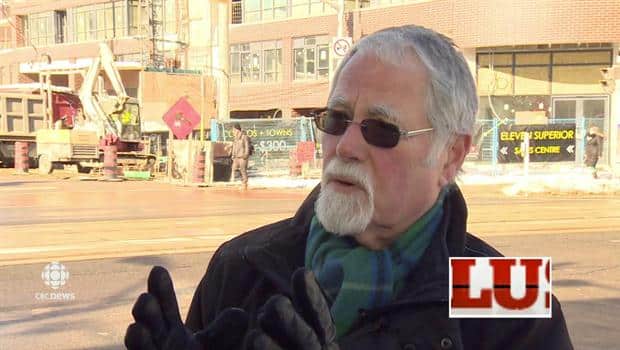 6 years agoVideo
3:59
A complaint has been filed with the city's integrity commissioner about Coun. Mark Grimes. 3:59

An Etobicoke resident has filed a complaint with the City of Toronto's integrity commissioner against Ward 6 Coun. Mark Grimes.

In a letter obtained by CBC News, Michael Craig wrote to the commissioner that he had "serious concerns" about Grimes, "with regard to his close relationship with developers." Craig urged the city to investigate the circumstances surrounding two actions Grimes allegedly undertook in his capacity as a councillor.

The first involves a motion Grimes put forward in 2011 that would require a developer to pay $150,000 in Section 37 money in relation to a condo project at Superior Avenue and Lake Shore Boulevard in Mimico. Section 37 of the Planning Act in Ontario allows developers to pay cash to municipalities or provide community facilities in exchange for increasing the height or density of a new building. As indicated in a CBC News report last month, that amount was $100,000 less than a previous agreement detailed in a city staff report.

Craig wrote to the integrity commissioner that his second concern is over Grimes' appearance in a video for a local condo project called Eau du Soleil in which the councillor touts the advantages of living in the ward. In his letter, Craig asked the integrity commission to look into whether Grimes violated Section VIII of the Councillors' Code of Conduct that says "No member of Council shall use the influence of her or his office for any purpose other than for the exercise of her or his official duties." Craig cites the example described in the code that prohibits members of council from using their status as a councillor "to improperly influence the decision of another person to the private advantage of oneself [or certain others]."

"When I saw the Eau du Soleil video I thought instantly that it was inappropriate for a councillor to be using his position to promote a private development," Craig told CBC News in an interview. "And it's told me that Councillor Grimes appears to be far too close to developers and maybe not close enough to his constituents who he is supposed to represent."

In an email response to a CBC News request for comment, Grimes wrote, "I don't believe appearing in the promotional video contravenes any section of the Councillor Code of Conduct. I was simply helping to promote Ward 6, as I always do." He went on to say that he has not appeared in any other videos and that he has not been paid to do so.

CBC News has found a number of other videos in which Grimes appears to be discussing condominium projects in his ward. One is a YouTube video by Wall2WallMedia, called "On the GO Mimico: A perfect blend of luxury and green living." In it, Grimes discusses the On the GO Mimico condominium project at 327 Royal York Rd. He says, "Out your back door you walk one minute to the GO platform. Out your front door, you've got the 76 bus that rolls up to Royal York subway in 10 minutes. So, people who don’t have a car, this is the place you want to buy."

Another video, posted on the website of developer Dunpar Homes, the councillor describes how he worked with a developer to save Vincent Massey, a former Toronto District School Board school, which was sold by the board of education.

Toronto lawyer John Mascarin, who is a municipal law expert, hasn't seen the videos in question, but says he would advise councillors to use caution when it comes to appearing in any promotional videos. "My advice would be [to be] very, very careful because it could appear that you're not just showing up to promote the city [and] that you are actually trying to influence buyers to buy this investment."

As for the Section 37 deal at 11 Superior Ave., Mascarin says, "I would argue there is no deal until council gives its final approval and authorization; however, I must say, if staff thought that they had a deal and there might have been something enshrined in writing, then it is problematic, I think, for the council member to stand up and take a significantly lesser amount than what the deal was negotiated by staff."

Grimes told CBC News that he stands by his statement from last month about the Section 37 deal. Back then, he wrote in an email that, "there was never an agreement reached with the applicant for $250,000 in Section 37 cash contribution." Instead, he said, "I recommended the $250,000 to try and negotiate the maximum benefit for the community."

Today, Grimes wrote, "there was an error in the staff report stating that the applicant had agreed to $250,000." Grimes says he was unaware of the new complaints to the integrity commissioner prior to hearing from CBC News, and that he himself has "asked the Integrity Commissioner to independently review [his] actions to ensure there were no wrong doings on [his] part."

If you have any information about this or other stories, please contact our investigative unit: John Lancaster john.lancaster@cbc.ca (416-205-7538) and Sarah Bridge sarah.bridge@cbc.ca (416-205-5511)