Tens of thousands of Toronto residents are spending Boxing Day in dark, cold buildings as they wait for electricity to be restored after an ice storm blanketed the region over the weekend. 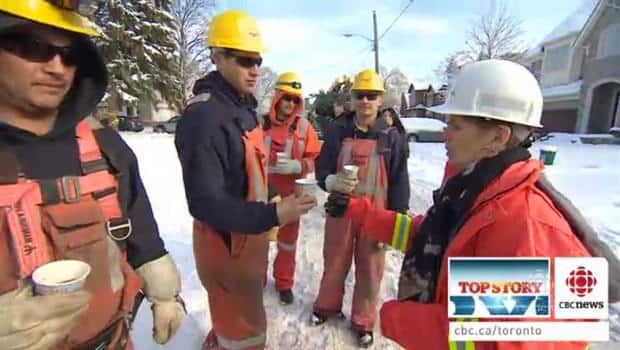 7 years ago
3:19
Tens of thousands of Toronto residents are spending Boxing Day in dark, cold buildings as they wait for electricity to be restored after an ice storm blanketed the region over the weekend. 3:19

It's day five of darkness for about 46,000 Toronto residents as they spend Boxing Day waiting for electricity to be restored after a major ice storm blanketed the region over the weekend.

Hydro crews are working around the clock to get the power back on and the number of outages continues to decrease, though some customers may have to wait until the weekend to see their power restored.

Toronto Hydro CEO Anthony Haines said the number of customers blacked out are down from a high of 300,000 when the storm first hit on Sunday.

At a press conference Thursday afternoon, Haines said they are entering the "door-to-door phase" of their operations as workers try to restore power to individual homes still in the dark.

"The progress will no doubt be slow as the work becomes more labour-intensive with the removal of both forestry and other impediments to get to the power lines before they can be restored," Haines said.

He said earlier Thursday most of Toronto Hydro's focus is now on restoring electricity to Scarborough, now that most of the work in the west-end is complete.

A few centimetres of snow fell overnight Wednesday, causing a number of new outages, and the new dusting has slowed efforts to restore power.

"As the snow set it, we saw the numbers go up a bit," Toronto Hydro spokeswoman Tanya Bruckmueller told CBC News Network on Thursday.  "We likely will see the numbers come back down again as crews do their shift change."

Bruckmueller said the restoration effort is now focused on "laterals" — the power lines that supply individual houses. "The last group will be people with damage to wires that supply their house directly," she said.

Toronto Mayor Rob Ford said forestry crews from other municipalities are helping clear tree debris throughout the city but the clean-up is expected to take as long as six weeks.

'We will not stop until the work is done'

Haines asked that customers be patient as the work to restore power continues.

"We are asking our customers to continue to give us some patience. Soon you will see Toronto Hydro crews on your street, or crews from other jurisdictions that are helping us, and you'll begin to see some of the neighbourhoods being restored," Haines said.

"You won't see the numbers coming down by the thousands, as we did in the early days ... you're going to see them coming down by ones. They are literally going to be one, two, three, four ... We will not stop until the work is done."

At the Thursday afternoon press conference, Haines also warned it's likely that some homes with power restored could lose it again due to weather or downed tree limbs, but said the improving weather forecast for the next few days is hopeful.

​Citing an overwhelming volume of calls to Toronto Hydro, Haines asked that city residents assume the utility is aware their power is still out and not to call in.

"If lights are on all around you, and your neighbour's lights are on, and yours are not, there may be some value in calling us again," he added.

A tweet from Toronto Hydro also asked residents with power to leave their porch lights on so crews can more quickly identify who does and does not have power.

Ontario Premier Kathleen Wynne said that OPP officers are going door-to-door in Toronto to check on residents without power. She also warned homeowners with possible electrical damage not to touch the wires or try to repair it themselves and to contact a licensed electrician.

Power Stream, which covers the region north of Toronto, reported this morning that 2,500 customers are still down, and Veridian Connections, which serves the Pickering and Ajax region east of Toronto, had about 1,700 outages.

Frustration seemed to grow among Toronto residents on the fifth day of power outages. At a barbecue Thursday for Toronto Community Housing residents who are still without electricity, a woman was seen on video approaching Mayor Ford and saying, "You better do something fast...I'm upstairs freezing my ass off, Mr. Ford."

Two children and two adults in east-end Toronto have reportedly been taken to hospital to be treated for carbon monoxide poisoning.

The apartment, at 35 Confederation Dr. in Scarborough, was without power and the occupants were burning coal to keep warm. The extent of injuries is not yet known.

All four occupants — including the children, aged two and three — were brought down dark stairwells from the seventh floor by emergency crews.

"It's still a challenge," he said.

"I think people need to hear the message that devices that are made for outdoor use like your charcoal barbecues, your gas-powered barbecues, generators — please keep them outside. I realize and understand the situation, the cold homes, but please do not make your homes more unsafe."

At least two people died of carbon monoxide poisoning in Newcastle, Ont., east of Toronto, on Monday after trying to keep warm with a gas generator in a garage.

A large house fire in the city Wednesday night is also believed to have been caused by candles being left unattended when a family went out, Mayor Ford said at a press conference Thursday. He said no one was injured in the incident.

Sales said Thursday that it has received twice the normal volume of calls over the past few days, mostly in the northeast part of the city, where much of the power is still out.

He blamed the use of candles, generators and barbecues in people's homes for causing many of the problems.

The ice storm was among the worst of its kind to hit the city in recent memory.

It left the city’s transit system with major problems throughout much of the weekend, particularly the streetcars which were suspended from service for a number of hours on Sunday.

The ice that fell also weighed down the branches of trees, which they fell onto cars, buildings and power lines.