So tiny they are barely visible — the little insects that have invaded Toronto this week are called midges. 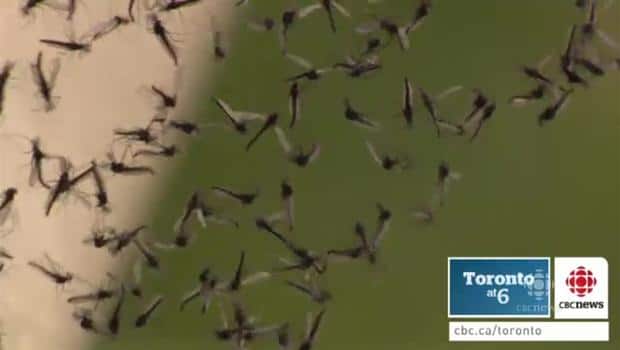 7 years agoVideo
2:24
Midges are what people have been seeing near the lakeshore in Toronto lately. 2:24

So tiny they are barely visible — the little insects that have invaded Toronto this week are called midges.

They don't bite, but look a lot like mosquitoes. They hang out around water and are attracted to light. They'll often end up mushed on windshields, smeared on clothing or in people's mouths, noses and eyes.

"It's just extra protein as far as I'm concerned," says Sarah Baird, who ends up ingesting the insects as she rollerblades along the lakeshore.

They're called midges, chironomids or non-biting midges. Informally, they are called lake flies in parts of Ontario. They're a member of the fly family.

Ontario Science Centre researcher David Sugarman says they are harmless. "They look like tiny mosquitoes, but they can't bite," he says.

Since they're usually found near water, that means midges are not far when Torontonians are biking, running or simply near Lake Ontario.

"We rode through black clouds of those things, glasses on, mouth closed, nose closed," says Natalya Kuziak as she rode past the lake.

"The clouds you see are actually a mating swarm," says Sugarman. "So if you get them in your eyes or mouth, perhaps you don't want to think about this too much."

The midges nest in water and are an important source of food for some fish. When they hatch they're attracted to light, which is why so many fly towards the condominiums on the lakeshore.

There seem to be more now because last year summer was wetter than usual.

"These are the adults emerging from last year's crop," says Sugarman.

The midges don't stay long. They will only hang out here for a few days. But if Toronto experiences a warm, wet summer, we can expect their return in a few weeks.

The best way to reduce the swarming is to turn off the lights and clear any sitting water.