Klever Freire says he and a colleague prayed and panicked as storm water started gushing into the elevator they were stranded in at their office building in north Toronto. Then they started punching their way out, as two police officers swam in to rescue them.

Toronto police officers swam with a crowbar to rescue the pair

Klever Freire says he and a colleague prayed and panicked as storm water started gushing into the elevator they were stranded in at their office building in north Toronto.

As the lift quickly filled with water, the two men found themselves in chin-deep water, despite standing on the elevator's handrails. When they only had about 30 centimetres of space between the water and the roof of the elevator, they frantically started punching a ceiling panel in an attempt to escape.

The effort left Freire, a 34-year-old aerospace engineer who heads the drone company DreamQii Inc., with bruised knuckles, while his coworker, Gabriel Otrin, 27, suffered cuts. But they did manage to open a crack just big enough to squeeze a cellphone out to call 911. Minutes later, two police officers arrived and set out to rescue the trapped men.

Const. Ryan Barnett said he could hear the men screaming for help when they arrived. His partner, Const. Josh McSweeney, estimated the men "might have had about five or 10 more minutes" before the entire elevator would have filled with water. 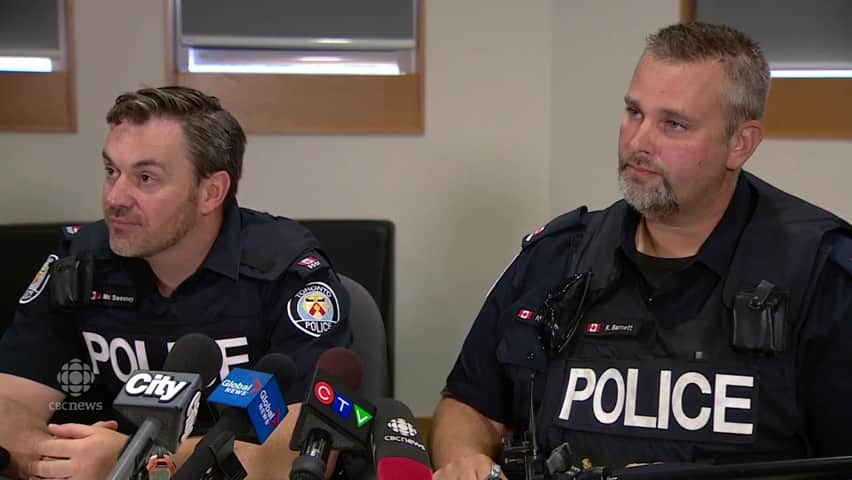 It feels great to have saved a life. That's what we're here for.- Const. Ryan Barnett

The officers said the cold, murky water was high enough that neither of them could touch the ground during the rescue's final moments.

Freire​ said when the doors opened it was a moment of tremendous relief.

"I'm not sure how much time we had left in there," he told reporters on Wednesday at the Alliance Avenue building where his office is based.

Otrin credited his faith with helping him through the ordeal.

"I prayed about it … and I was able to remain calm as a result because I knew God would save us."

The dramatic rescue happened in Toronto's northwest end around 11 p.m. on Tuesday, shortly after the city was slammed by what meteorologists are calling a "tropical downpour" that dropped upwards of 50 millimetres of rain on some areas in just one hour.

The two men were trying to get to the basement when the water started coming in, leaving the elevator stuck.

Otrin tried to use the elevator's emergency system, but by the time they heard a response, the water was covering the speaker. Moments later, the electronics were fried.

The water quickly reached their waists while in the elevator, but then started slowing down. Freire said he watched the water cover different floor buttons. None of those buttons worked, nor did their cellphones.

"There was a period of time where, I mean, Gabriel was praying," said Freire.

"But I don't know, at some point, I decided that wasn't going to be the moment," he said.

That's when they started punching the ceiling, an effort, Freire said, that was hampered by the stinky, freezing water sloshing around inside the elevator.

"We were just full of adrenalin," he said.

Otrin told reporters he resorted to using his head to pry open the panel, as they both struggled to maintain a signal to keep a 911 operator on the line.

Officers Barnett and McSweeney were almost finished what had been a crazy day — police were swamped with calls for assistance due to the heavy rain — when they heard a radio call about two men trapped in an elevator with water coming in.

At a news conference today, Barnett said he knew they were just minutes from the building, so they crossed into the neighbouring police division to help out. As they drove, they were getting updates that the water level was climbing in the elevator.

When they arrived, they realized the top hatch could only be opened about 10 centimetres, so they decided to try pry open the doors.

The whole time, they kept talking to the trapped men.

"They obviously didn't want to be in there anymore," Barnett said.

McSweeney tried a long crowbar first, but that wasn't working, so he swam back to get a shorter one. He said at that point, he couldn't touch the floor, but there was a railing to stand on to get the leverage required to crack open the elevator doors.

"There was no panic," McSweeney said.

Showers, shots and happiness after rescue

Once all four men made it to safety, however, the seriousness of the situation started to sink in. Barnett said one of the men gave him a big hug. McSweeney had another realization: "we needed a shower."

Barnett said he found it nearly impossible to sleep last night, but said it feels great to have saved a life. "That's what we're here for," he said.

Freire said once he and Otrin were dry, those around them were shocked to hear what had happened as they waited for their families to pick them up (Freire's car was badly damaged in a flooded parking garage.)

Freire said one woman offered them a shot of vodka. They took it.

With files from Greg Ross and The Canadian Press