The Toronto Zoo's plan to ship three aging African elephants in crates to an animal sanctuary in California is being criticized by several experts — including the zoo's former CEO — as being dangerous and even deadly.

Toka, Thika and Iringa to be moved to California sanctuary 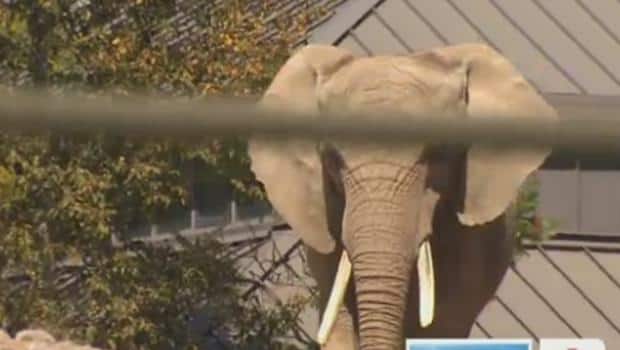 7 years agoVideo
2:10
The Toronto Zoo's plan to ship three aging African elephants in crates to an animal sanctuary in California is being criticized by experts. 2:10

The Toronto Zoo's plan to ship three aging African elephants in crates to an animal sanctuary in California is being criticized by several experts — including the zoo's former CEO — as being dangerous or even deadly.

The zoo announced yesterday that Toka, Thika and Iringa will be transported in trucks to the PAWS Wildlife Sanctuary near Sacramento, Calif., after the Thanksgiving weekend.

But some are warning that the journey, which is expected to last 50 hours, could put the animals at risk.

"These elephants are not trained elephants, so they will be in the cage for that full period," said former Toronto Zoo CEO Peter Evans. He said that the large metal crates that will transport the animals will prevent them from moving forward, backward and sideways.

"The current land transport plan is expected to be four to five days, with the elephants being chained in crates, standing in their own feces and urine for the entire journey. How is this safe and humane?" McKenzie said in a statement Tuesday.

The elephants will travel in two climate-controlled trucks with frequent stops for veterinary checks. Each will be in a crate with their feet restrained. Three elephant managers and two veterinarians, all of whom have pachyderm-moving experience, will travel with the convoy.

Trainers have been working with the elephants over the last year using crates similar to the ones they will be moved in, but there have been several challenges. So far, they have only been successful in getting one elephant to stand inside a crate for 15 minutes. Another elephant, 44-year-old Iringa, won't let trainers touch her feet.

"Of course it's a concern, we're worried sick about it," said Toronto Zoo wildlife care supervisor Chris Dulong. "We're concerned about our elephants."

Zoocheck Canada, the organization working with the sanctuary to move the animals, says the plan is safe and that most elephants are transported in the same way.

But one expert says that that these elephants are different from most.

"These are not trained circus animals," said Ian Duncan, emeritus professor and chair for animal welfare at the University of Guelph.

"We know that elephants in circuses can be transported over big distances, but the journey can be broken up … That isn't the case with these Toronto elephants," he said.

Toronto City Council voted in 2011 to send the three elephants to the U.S. facility after groups voiced concern about the animals' welfare. The option of getting the animals to California by plane was taken off the table earlier this summer.

The elephants are scheduled to be moved at the end of October.